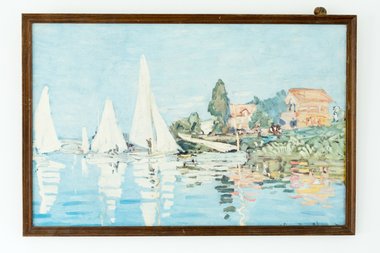 Two 'Idylls' are reproductions of landscape or sailing boat paintings, one with a snail shell on its upper frame edge, the other with cicada skins on its image of lunch being brought to a group of labourers harvesting wheat. These materials bring sculptural elements (empty crusty animal exteriors) that as symbols of slow time work against the conventional daily narratives of the readymade images.

The last show I saw here by John Ward Knox (about a year ago) featured a lot of drawing with paint - if that makes sense? As he has done for some time now, he had used the medium of black oil paint for its tonal modulation, much like another artist might use a soft leaded, dark pencil. It was not graphic or linear, but plastic, in its imagery - being preoccupied with mass and volume.

This new show uses found objects (he has done this before) in two ‘traditional’ works, while the other items are dematerialised, if not ethereal - much like, say, the ‘pin’ works of Patrick Lundberg. Like several of his earlier exhibitions, the support is usually silk. Unlike last year, the inclination is not representational verisimilitude of portable objects, but (ostensibly) chaos. It seems to be about correlation and transference, how information gets conveyed across space and time. The process.

Two works of dense galaxy-like constellations of dots refer to the Treaty of Waitangi in their title: 06021840. The complicated configurations are identical but one set is made with impressed ink from blue carbon paper rubbed onto silk and the other is made through clusters of pinpricks in the gallery wall. The visitor walks between the two works, the silk /carbon one being suspended from the ceiling with plumb bobs at the opposite end of the room. The carbon dots obviously reference some earlier source image (perhaps not, maybe it is only a tease?), while the second work was made by fastening the first one to the wall, and pushing pins through the hanging rectangle of diaphanous fabric. Ward Knox seems to be taunting the visitor about ambiguities of interpretation associated with production and meaning - if you can separate the two.

A suite of four looping bands of silk continue this theme. They have typed on marks, transferred mechanically from a black carbon ribbon, having a vertical front and a back. ie two suspended planes to be looked through while being dissolved by light. One work is made of scattered (single) quotation marks, another uses wavy rows of horizontal equal signs, and another still undulating columns of alternating, open/closed, curved brackets. A fourth has one single column, centred at the back with a vertical line of IOIOIO capitals, perhaps referencing Jacob’s Ladder and Io, the Māori supreme being.

Two other works of thin fabric on square stretchers, use separately carbon paper traces (on linen) and glistening encrustations of snail slime (on silk). Whether they are some sort of codification (of a procedure) I’m not sure. It might well be that Ward Knox simply enjoys these unusual substances and their surface qualities as isolated simple marks, with no significantly meaningful symbolism or gestalt intended, no unifying shape to be ‘read’ from the collected fragments.

Three other works involve found objects. Two Idylls are reproductions of landscape or sailing boat paintings, one with a snail shell on its upper frame edge, the other with cicada skins on its image of lunch being brought to a group of labourers harvesting wheat. These materials bring sculptural elements (empty animal exteriors) that as symbols of slow time work against the conventional daily narratives of the readymade images.

For those uncomfortable with conceptualism, or highflying interpretative Catherine wheels sprung out of gallery corners, probably the most accessible work in the show is Literal Web, a spider’s web made of sterling silver chain. Yet it is a mischievous title, for we are not literally seeing a spider’s web, but a crafted representation that seems to state a sticky quandary about its own popularity: the trap of being liked too much, of it being easy to attract admiration for its recognisability and labour, of the ease in making variations. It’s more straightforward than the rest of the exhibition, linked perhaps to your Great Grandmother’s Victorian jewellery, and not to Ward Knox’s own chain and wire works of 2007-9, prevalent at the time.