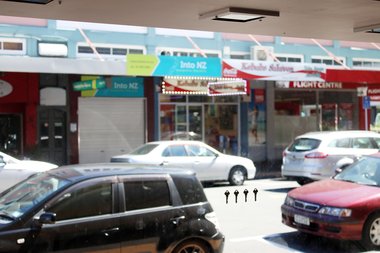 The third member that makes up this creative trio is conceptual artist Lance Pearce with his prosiac visual conundrum. A row of keys has been sellotaped to the inside window of the gallery. The work does not have a title, or rather it does, in the form of a short narrative that sounds like the beginning of a novel or even an outlined sketch of a plot for some yet to be developed daytime drama.

At night the world shifts register, literally and psychologically, the latter at least for its most impressionable inhabitants. The daytime world can then morph into something quite unexpected and extraordinary. It’s the time when a large body of Americans believe they encounter a UFO.

The time when a spell is cast, just as dark approaches, is not called the “twilight zone” for nothing. At a reduced level, the shadowy realm can have hallucinatory effects for all of us, and none more so than when we’re driving at night. Alone, on a lonely back road can do it. Ziggy Lever has been there. Something happened, he says - but he won’t say exactly what - on a small stretch of road (Whatipu Road) near where he lives, one evening while driving along this narrow bush-clad strip.

From a photography background, Lever has attempted to reproduce this experience for the viewer in a 17 minute video simulation of the experience. A camera mounted inside the car photographs in real time the replicated journey. Watching the film, we see the way ahead, feel the slightly spooky presence of the encroaching bush line, and encounter one or two other cars approaching, headlights on.

Perhaps we are reminded in the process, of having similar experiences earlier, where under such occasion time was lost, reverie held dominion, or some sort of “other” experience took over. An encounter, maybe not of the third kind, but perhaps a second order enchantment beyond the mechanistic dictates of a modernist mind-set. This is where banality becomes transported by a slight shift of perspective leaving one an initiate of trance, resulting in one being transformed.

The night is another country.

To facilitate the viewing of this re-enactment, a long white half-drawn curtain has been draped around the space to create an enclosure that both isolates and enhances the viewing experience.

It was Abraham Maslow who coined the phrase, “peak experience”, those occasions that introduce us to another order of reality, “epiphanies” - in the words of James Joyce - that belong wholly to this world; moments when glimpses of strangeness are caught in an ordinary situation.

We are here perhaps reminded of the problematic nature of reality and truth. As Booker Prize winner, British novelist, Julian Barnes has one of his characters in A Sense of an Ending say, “History is that certainty produced at the point when the imperfections of memory meet the inadequacies of documentation.”

When you enter this show the first work, however, that catches your eye is a 3D image of an overlarge hand and arm casually leant up against the gallery wall. This disembodied sculptural form is made of pink foam rubber. Rough-hewn in shape it is similar to those carved polystyrene sculptures Peter Robinson often stacks up in small gallery spaces.

Lucy Meyle’s work though is more modest in proportion and concept. Her pieces possess a cheeky witty look with the slightest nod to Pop Art and Claes Oldenburg. The painted nails on the hand make it female and perhaps a personal reference to the artist herself - the hand of the artisan, literally or figuratively.

Jauntily positioned up against the wall, it recalls with less shock and unease the truncated human forms of Robert Gober, such as his realistic model of a human leg sticking strangely out of a gallery wall. Meyle however is more playful, without any sign of angst. Where Gober is all existential dread, Meyle is the sixties optimist with Nietzsche’s “Yes” to life. Indeed Meyle’s work have been given the repetitive title of “yes yes yes yes yes” the mood of which is corroborated by a sculpture in foam which is simply a small giant tick, in Nike fashion, mounted upon a foam plinth.

Foam rubber, like plastic, was the new substance of the post war period, a modern ingredient that denoted in a small measure the age of dreams, idealism and utopian hopes. It was the stuff that replaced lumpy kapok in mattresses. Dreams indeed could all come true on this soft yet firm and lightweight material. It was porous and pliable, solid yet malleable, a perfect medium to play with in 2015 for a graphic artist intent on looking at the creative practice in a critical and humorous fashion.

While using a material initially despised for sculptural forms, this is more a revelling in the act of creation than a lampooning. Making the plinth and the sculpture in the same material narrows the gap between the art and its display system. A sense of fun is apparent.

On one of the gallery walls near a neglected corner, is positioned ceiling high a small circular piece of yellow foam, a dot, acting as a kind of punctuation mark. It perhaps strayed from a Lichtenstein comic book painting, and was overlooked.

The repeated cry of “Yes” in Meyle’s titles recalls the same affirmative declaration at the very end of Molly Bloom’s long fifty page internal monologue in Ulysses. And like Joyce, Meyle has reached down into the ordinary world for her materials from which to make her art. She has, in addition, perhaps in an act of exuberance, dipped her foam in paint and smeared it across several canvases, leaving skid-marks, traces of pigment that might resemble the briefest sketches of landscape or lines denoting hesitant but unfinished ideas. Anything but heroic, these marks are doodles, jottings, tentative signs signifying perhaps that certain forms of art practice have become worn out, in need of reinvention.

The third member that makes up this creative trio is conceptual artist Lance Pearce with his prosiac visual conundrum. A row of keys has been sellotaped to the inside window of the gallery. The work does not have a title, or rather it does, in the form of a short narrative that sounds like the beginning of a novel or even an outlined sketch of a plot for some yet to be developed daytime drama.

A window is left slightly ajar. House keys, belonging to a surgeon, are attached to the gallery window with transparent tape, thus preventing him easy access to his house.

Is this a real puzzle to which there is some logical and reasonable answer, or is Pearce simply messing with our heads? If the latter, to what ends?

Has the surgeon’s partner, who works at the gallery, in a fit of pique for some minor indiscretion on the part of the other, stuck these keys up on the window as a cryptic message about the impending doom of their jaded relationship? Or is it about the futility of a surgical scalpel on glass? The scenarios are endless.

Maybe it is something of a much larger order, a generic statement about the absurdity of life, that there is no real key or meaning and the window slightly ajar is simply a torment: a tease to those who wear themselves out looking for one?

As always, Karl Bayly has brought together a small clique of artists who in quizzical fashion work away at the quiddities for our customary delectation. Yes, no and maybe: all three approaches vie for our allegiance in this rambunctious and quietly compelling show.