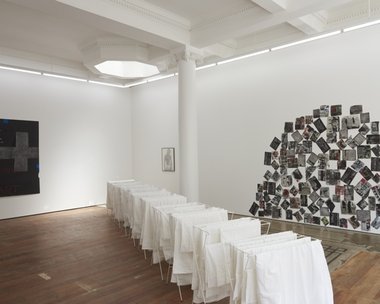 While much of the show is predictable (in the sense that the shocking realities shown in works by say Peter Wells, Stuart Main and Fiona Clark have been well known for three decades now) there is a refreshing recontextualising on the part of Michael Lett the organiser, bringing in a lot of work initially not associated with this theme, placing it within new interpretative frameworks so that concepts normally deemed quite separate now overlap.

This unusual exhibition with its stellar line up of some of this country’s top artists, is designed to co-ordinate with Auckland’s Pride celebrations. It is a tribute to the Implicated and Immune show curated by Louis Le Valiant and held in The Fisher Gallery (now Te Tuhi) in Pakuranga in 1992, a presentation that examined the disastrous social and cultural consequences of the AIDS epidemic in this country - at the time in full force.

This updated version has several underpinning agendas. Firstly AIDS has not been eradicated - infected people (fewer in number) are still dying - even though medication for stalling the onset of HIV into AIDS is more successful now and easier to access. Nevertheless procedures for safe sex are just as essential today as they were twenty-three years ago, particularly as there are more HIV cases now than ever. So the exhibition presents some of the original material promoting condom use - as well as providing general information through artworks and television dramas.

Secondly, overt expressions of homophobic prejudice may be illegal but the hostile sentiments in some parts of the wider national population have not disappeared. This means that solidarity within the homosexual community is essential for its self esteem and confidence, as is wider empathetic support from beyond that group. This show includes many heterosexual artists expressing support through their participation, and is less LGTBI in emphasis. Less queer in the broader political focus of that term.

Many works are about celebrating homosexual cruising (Russ Flat), its varied manifestations of desire (Jack Body), or about expressions of grief through the memory of departed friends (Trevor Fry) and iconic gay heroes (Imogen Taylor). One or two are about the nature of love itself (John Reynolds) - in all its forms - whether devotional or carnal, as something to be wondered at. Others (like Ava Seymour and Fiona Pardington) look at types of fetishism, varieties of pleasure not necessarily solely affiliated with same sex relationships.

In the Lett space this show takes up three levels and the main gallery office. Some of those levels (especially at the top in Lett’s library and upper staircase) are very small but they provide an effective intimacy.

While much of the show is predictable (in the sense that the shocking realities shown in works by say Peter Wells, Stuart Main and Fiona Clark have been well known for three decades now) there is a refreshing recontextualising on the part of Michael Lett the organiser, bringing in a lot of work initially not associated with this theme (like that of Marie Shannon, Richard Killeen, Daniel Malone or Julia Morison), placing it within new interpretative frameworks so that concepts normally deemed quite separate, now overlap. With the just listed artists, the encompassed subjects include grief, burial, masturbatory fantasy and religious faith. Lett’s curatorial selection has allowed a broader poetical quality and thematic mixing to surface.

With male AIDS victims far outnumbering female ones in the homosexual community, this show - in its mourning of lost friends and lovers, and celebration of identity - obviously represents a selective slice of the Pride banner, so that lesbian pride or Sapphic desire inevitably is ignored. While there are plenty of penises (Daniel Malone, Campbell Patterson, condom posters) to please a gay gaze (and some hetero women), and bottoms too (Douglas Wright) - there is also a lot of wit about types of randiness (as with Richard Orjis’s ‘golden shower’ of honey video, or Alex Vivian’s vaseline smeared Adonis), and sex that beckons forth death (Grant Lingard’s array of drying sheets and towels could be a sequence of shrouds; Christine Webster has a photo of Douglas Wright, who is HIV positive, embracing a skeleton).

Lett has carefully avoided ghettoising the AIDS affected gay community by having other groups participate in this show, so that ‘conversations’ emerge between differently motivated sources. With 41 items from 31 artists (or community groups) this well thought out exhibition is a dense, disturbing and undeniably moving assortment that generously repays several visits.