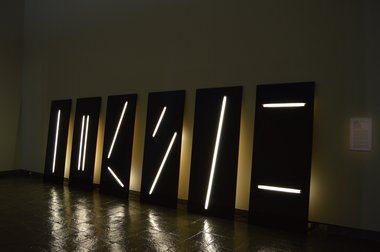 In a slightly corny way, it's like some poignant moment in a television drama when the violins start playing and at the bottom of the screen the caption reads “uplifting music”. Materially it is quintessentially “New Zealand made”, the place where folk art meets fine art.

Presently showing at the Waikato Museum is HOTERE CULBERT, the sole northern venue for this exhibition of collaborative works, curated by Dunedin’s Aaron Kreisler, and toured by DPAG. It’s a show that brings together material that hasn’t had an airing for some time and throws up some interesting historical conundrums especially regarding the question of light.

The theme of light as a thing in itself sufficient enough without being loaded down with allegorical or religious baggage was what ushered in the modernist period with Monet and the Impressionist movement. With its focus on the here and now corresponding to and reflected on the notion of the Enlightenment, it helped pave the way toward a lighter aesthetic in the twentieth century, most notable in its relation to architecture and design of the Bauhaus crowd.

But it didn’t take long for light to become heavier, more ponderous and darker again later in the century as artists like McCahon reconnected its symbolism with the pre-modern world. In resurrecting the Christian narrative, albeit in the Canterbury hills, like some protestant fundamentalist preacher, (later works translated into abstraction using black and white), McCahon reinvested light with its older more classical and conventional religious qualities.

Hotere did something of the same, coming as he did from a Roman Catholic tradition. Predominately using black (New Zealand’s favourite colour to match our dour and melancholy character) he too worked within an older convention reworking it in a modernist package and attempted to extract some light from the caverns of dark for his own spiritual purpose.

Hotere’s black, like Ad Reinhardt’s, is not the black of nihilism or despair or defeat or death without remainder since it was often accompanied by the shadowy figure of a cross, emblematic of the symbol of Christian victory over death. His visit in the sixties to the grave site of his brother in Italy, killed in World War Two, is a seminal experience in this context. In a kind of perverse way, Hotere takes the colour black and sacralises it, squeezing some light out of its hues and overlaying it with the images of circles or crosses, both of which are cryptograms of God, in order to redeem the signage. This is essentially Colin McCahon although in quieter more polite tones, with a subdued and subtler voice. It took someone like Bill Culbert, an apostle of light, to lighten the load in his collaboration with Hotere beginning in the early nineties. It was like the old world meeting the new world halfway, and in the process, something shifted.

Culbert, the light-bulb man, is the preeminent worldly figure, rummaging down among the plastic rubbish heaps of contemporary life to find his material and plugging it into a modern industrial wall socket to illuminate his concerns. Culbert said, “Let there be light” and there was, but it was wholly secular and of this world. Electric light, that symbol of modernity, chasing away the ooga booga shadows of night and primeval darkness, was the artist’s means of a worldly salvation. No crucifixions here, just the play of something like neon passing through elements of the real world - buckets, boxes and old plastic bottles lined up in rows for political effect.

Plastic junk and other ‘detritus’ thereby became transformed, became luminous, celebrating the world of the ordinary and the profane. So the nineties double act of Hotere and Culbert sees the heaviness of a light-riven spiritual blackness combined with the illumination of an airy heathen material light - to brighten and lighten the story in a startling and shape-shifting way.

In this hybrid conjunction, the black of Hotere changes when met with the overwhelming light of Culbert. It becomes the darkness of which Nietzsche spoke, flat and unilluminated by some crucifix or story of redemption. It is simply black in and of itself now illuminated from rods that are singular and multiple ordinary light-bulbs. “May the force be with you.” The black is godless without transcendence other than that provided by humanity itself.

Rather than producing a misfit - the light-footed Culbert in a macabre dance with the more heavy-hearted and ponderous Hotere -the combo created a startling fusion marrying up light and dark in arresting ways. The meeting of the sacred and profane produces a metamorphosis that does away with the intrusion of awkward metaphysics and promises that can’t be fulfilled. No unseen dimension is conjured here. This is a world that speaks of the inherent beauty in life, about “the light that never goes out” (The Smiths) dancing upon the darkness so that the latter does not completely prevail.

Blackwater (1999) is the most audacious in this respect. Hidden away and languishing for years in the vaults of Te Papa, it is now come to life in Hamilton, placed in a site specific setting in the gallery - a room to its own which the viewer has to enter through a doorway opening that helps create the maximum impact on entry. That effect is one of startled surprise, catching the visitor momentarily off guard. On a horizontal swathe of black corrugated iron sheeting, heavily lacquered and laid out on the floor, a series of burning fluorescent tubes burst upward out of the iron like a dozen Excalibur swords or an astonishing show of extravagant white flowers, like some postmodern Monet. This moon-struck lake with its dark liquid gleam recalls Homer’s “wine-dark sea”, theatrical, operatic, a collage of the common and ordinary made extraordinary.

P.R.O.P. (1991) is the next largest work in the exhibition standing like the fortification it is, a kind of lit-up palisade that recalls the old historic pa site, long demolished and witness to a more recent demolition at Port Chalmers, the destruction of Observation Point to make way for “development”, a matter opposed by both artists.

History is invoked again in Whale/Bone (1997) made up of six doors painted black with Culbert’s fluorescent tubes inset in each at varying angles to suggest both white bones and the notation of ancient hieroglyphics. Inspired by Culbert’s journey around New Zealand visiting marae sites that used assembled whale bones as entrance gateways, the piece speaks of the past both as lament and commemoration.

Post Black (1992) made up of thirteen window frames, takes the motif of vision and prescience and ramps it up a notch by being surrounded by halos of light. Windows, doors and entranceways of course have traditionally had a long history signifying initiation, passage, beginnings, endings and transitions. The presence of colonial frames in the work may allude to our own troubled history as a developing nation.

Included in the exhibition are the preparatory sketches and annotated notes to Pathway to the Sea, some of which have been reproduced in lithograph form.

The common thread that ties all this together - politics, time and mortality, windows lit up in the dark and a lake alive with ‘flowers’ - is the notion of beauty and possibility raised against death in all its various guises. In a slightly corny way, it’s like some poignant moment in a television drama when the violins start playing and at the bottom of the screen the caption reads “uplifting music”. Materially it is quintessentially “New Zealand made”, the place where folk art meets fine art and a fitting compliment to the Light Show at Auckland Art Gallery, brought all the way from London’s Hayward.

Well, I enjoyed this read, Peter, and I found it humorous as well as a favorable review. I think calling ...

Here readers can ruminate on whether Dornauf has used the word 'corny' unwisely, and whether Leitch has correctly pulled him ...

Calm down Dawn and wipe the saliva from your lip. If you read closely, I was praising the work.

"Corny"??? Is it described thus simply because that is the current take on art that toys with the transcendent? Because in this post-materialist art age we are all supposed to be making tea for the audience and muttering about Kristeva? Or is it simply the lack of studio space at artschools resulting in practices that disavow the object in favour of smart, obdurate, sphinxlike works that allow any number of wordy philosophical critiques because, in essence.....they are empty and meaningless and hence susceptible to the polysyllabic silicone that critics can pump into them???

Calm down Dawn and wipe the saliva from your lip. If you read closely, I was praising the work.

Here readers can ruminate on whether Dornauf has used the word 'corny' unwisely, and whether Leitch has correctly pulled him up on it - or has she in fact over-reacted?
Or has he responded to her comments in a kneejerk fashion himself?

Well, I enjoyed this read, Peter, and I found it humorous as well as a favorable review. I think calling us 'Post-material' is taking it all a bit far; I for one have certainly seen no evidence of that even in the arts - it's all a bit of an investment really, isn't it? I mean, look what a Hotere goes for now?
And I love what I have read of Julia Kristeva, she was like a breath of fresh air to read.