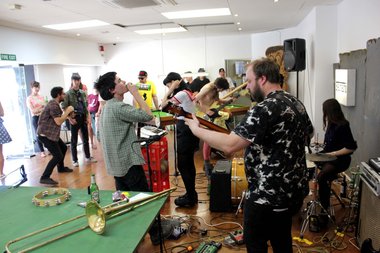 Inside the simulated gallery in Hamilton, one finds all the accoutrements that went with the original, or at least something like it: table tennis table complete with bats and balls, a pool table set up ready to play, BBQ, gas bottle, large plywood cutout of a mascot looking like Coyote from the cartoon Roadrunner, holding brush and palette. Along with these elements came the mandatory couch, and to help create ambience, the white pristine gallery walls were covered with large grimy used Gib slabs complete with their own graffiti.

Here’s a novel idea. Stage an exhibition in a gallery in which there is not a piece of art on display; none at all, at least not in the conventional sense. Rather, make the show out of the recreation of another gallery space from another city altogether; not the art from the gallery but just the ‘space’ itself. Talk about simulacra and testing the status of the real. Then throw in a performance piece that lasts several hours - music, pool, table tennis, drink of course and a BBQ with sausage sizzle out on the pavement. Hang on a minute. This sounds suspiciously like your everyday ordinary Kiwi booze up.

Well, yes it is, but in this case it happens to be a re-enactment of the original venue in Grey Lynn that was a converted double garage made into a gallery arena and run by the Ferari Boys, four Auckland lads who constructed the DIY space adjacent to their rented accommodation for emerging artists to exhibit their work in.

Obviously wanting to take the Grey out of Grey Lynn, the art shows they exhibited came complete with a band performance (Girls Pissing On Girls Pissing), the ubiquitous pool table, BBQ etc. The gallery, which also served as a community based venue for shows and events, operated for a couple of years (2012-2014) but is now defunct. Thus the recreation in Hamilton at Pilot Gallery was in some ways a nostalgic gesture to the past, a salute to things that once were, a literal exercise in art about art, an engagement with process, a recognition of the ephemeral nature of the business and just an excuse to have a good time.

Inside the simulated gallery in Hamilton, one finds all the accoutrements that went with the original, or at least something like it: table tennis table complete with bats and balls, a pool table set up ready to play, BBQ, gas bottle, large plywood cutout of a mascot looking like Coyote from the cartoon Roadrunner, holding brush and palette. Along with these elements came the mandatory couch, and to help create ambience, to top it all off, the white pristine gallery walls were covered with large grimy used Gib slabs complete with their own graffiti - spray painted messages like “Free Tibet” and “Boring or not” and of course, the ever present love heart. It all contributed to a slightly grubby makeshift grunge feel evoking the Grey Lynn garage space.

Inside this gallery inside a gallery like some Matrix morph phenomena, a TV monitor shows footage of the original in operation, testament to the reality of the past and cue to breaking the spell.

The Ferari Boys - Dawson Clutterbuck, Dylan Scott, Joseph Griffen and Robert Fraser - have all gone their separate ways now, still practitioners of the arts but not however in the same communal seat-of-the-pants way. The Pilot show with its ‘model’ on a one to one ratio, becomes a tribute to the home grown Indie art industry, a community cottage enterprise in a world where established art institutions tend to become dominated by well-worn names, where curators looking for new work come with a set of agendas, where fashion plays its part, all of which makes it difficult for the beginner and art school grad, to break into.

For the visitor to the gallery it will seem like a slightly shabby, worn and scruffy pad, which of course is the exhibit itself in all its tattered ersatz masquerade. But to those of more senior years, it becomes, given the encouragement to participate in a bat and ball game on site, an experience of reliving one’s youth, recapturing those bygone days, chasing after something long gone, like Gatsby who believed in the green light, “that year by year recedes before us”.

This ‘exhibition’ configuration is probably the first of its kind in New Zealand, (though the Walters winner comes close) stretching yet again the boundaries of what a gallery can tolerate, and for that reason will excite those who are always enamoured by any defiance of boundaries and prescription, especially that connected with avant garde art practice.

The reconstructed gallery is the fiction, a mimesis that attempts to defeat the arrow of time, a simulation that defies the blocked return. The ‘exhibition’ is thus a kind of virtual reality that is real while faking it; an imaginary world, based on one that was more than fantasy, inducing the experience of the original without the use of stereoscopic equipment.

A fun show and great meeting of Hamilton and Auckland independent art makers.

A fun show and great meeting of Hamilton and Auckland independent art makers.