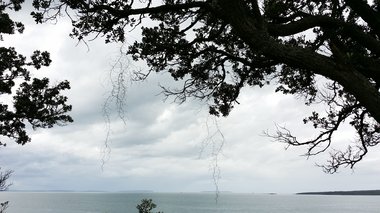 So, looking at the quality of work: there's 20% wheat, 80% chaff. There are over a hundred artists, many with more than one contribution, so after considering artistic inconsistencies my view is that there are only about twenty items worthy of prolonged serious attention. That's a huge amount of crud leftover, stuff resulting from bad selection and bad placement. The few good artists often suffer from clueless juxtapositions with middling or dreadful ones.

Look at your watch, EyeContact reader. According to my settings the time should now be sometime after 5.15pm on Sunday 16 November, the deadline for the last admission on NZ Sculpture OnShore‘s final day. After considering my options I have decided not to provide publicity for this exhibition, one I consider substandard - even though it (like its nine earlier versions) is designed to raise money for NZ Women’s Refuges, an indisputably noble cause needing public assistance.

You might consider my response somewhat extreme, even arrogantly dismissive - although you might also appreciate that I am caught in a dilemma. For there is an issue I want to spotlight: the popular expectation that art writing be promotional and supportive. Most of the art here (80%) I for various reasons consider appalling, despite it (as I’ve said) being presented to assist fund raising for a valuable community service.

For that reason I didn’t want to thwart the ticket selling exhibition agenda by publicly criticising the event in a manner that could be interpreted as persuading people not to come. However my role as reviewer is to advocate what I perceive as important or meritorious art, to attack what is not - and to liven up debate about taste and/or quality through this forum. That is my priority. Therefore I prefer to delay this post, and raise these issues (and dish out a little praise) when it is over. I’d rather do that than be seen as obstructive in my apparent negativity - or promote mediocrity by publicising it while the show is still going.

So, looking at the quality of work: there’s 20% wheat, 80% chaff. There are over a hundred artists, many with more than one contribution, so after considering artistic inconsistencies my view is that there are only about twenty items worthy of prolonged serious attention. That’s a huge amount of crud leftover, stuff resulting from bad selection and bad placement. The few good artists often suffer from clueless juxtapositions with middling or dreadful ones. With so much space available their contributions should have been kept far apart from all other works so that their attributes and nuances could have been studied in isolation.

So, here are ten great works. About half of what I consider to be of interest.

Jim Wheeler’s delicate stainless steel sculpture Epiphytes almost looks invisible when suspended from the branches of a tree that faces out to sea, and one is not up close. An enlarged replica of a native lichen that gains its sustenance from the air the work appeals for botanical reasons (its strange habitat) as well as being a fine line drawing in space with various nodes, strands and swellings. The plant’s linear configuration is rich in associations. It could be mistaken for forked lightning or a zigzagging detail from a rural road map. It is an extraordinary object to look at.

Audrey Boyle‘s entangled white vinelike forms, Subtlehack, are a form of improvised drawing in the mottled space occupied by the twisted and gnarled boughs of trees. The purity of the glowing white darkens the arboreal recesses and foliage within the lines, while the undulating linear configurations, with their irregularly stuffed and stretched skins, seem to allude to distended snake stomachs as much as drooping plant life and shambolically composed netting. The stretched material has a runny fluidity (it could be liquid) in its curvaceous qualities and unpredictable direction.

Gaye Jurisich’s long train of stitched together blankets, caught in some trees, turns the rugs into a giant flowing scarf. Coverted’s incongruity, as if plucked from Gulliver‘s Travels, revitalises the landscape, a humungous fabric streamer abandoned by some Brobdingnagian reveller. The seemingly casual manner of its installation is its greatest attribute.

Also tree-bound, Marlyne Jackson’s deft stylistic combinations of Tiffany lamps and chinaware - via their hybridity - mock functionality, and the privileged security of a formal domestic setting. Meticulously pristine and ornate, these enigmatic and fragile objects in and the dance goes on hint of picnics and long summer evenings.

Karyn Taylor’s Enfold/Unfolded Order is made of a large rectangular block of laminated pink acrylic. As the title says, it seems folded back upon itself, designed to absorb light through its translucent sides and push it out with added intensity via its subtly darker edges or shallow troughs in its surface. These narrow planes look electrical as if powered by electricity while the subtly milky surface appears to be related to wax or soap.

Using taut lines of parallel wire to transmit sound, Hopscotch by Sharonagh Montrose is an experiment with sonic emissions where no speakers can be detected, though small ones with amplifier are present under a grassy bank at the collected ends of the five wires. In her wonderful sculpture the sound of children reciting a poem by A.A. Milne is split so that it is partly conducted by the wires up to a high wooden ‘guitar’ bridge with insulators where it is released, and partly carried in a tangential direction through an underground drainage pipe to a circular metal grate where it is mixed with a recording of flowing water and waves hitting the base of the cliff.

Sally Tagg’s inventive forged steel sculpture is a variety of highly decorated sleigh or deckchair/trampoline/umbrella. It features brightly patterned canvas pieces that feature a ubiquitous spiralling conch motif that looks a bit like a treble clef. The curved canvas rectangle tautly stretched at the top (like a tent roof) looks like a piece of ornamental carpet with floppy tassels on its edges. Sitting on a rectangular bed of white stones the work has a distinctive presence that involves not only humour, but a rich array of eye-popping screened motifs such as seahorses, plant-life and shellfish.

Russell Beck’s vertical cluster of merged lemon coloured cubes changes its volumetric orientation according to the direction it is observed from. Its acid chroma lifts the ambiguous slablike form away from the green/blue setting, and is celebratory as a physical presence in its own right.

The see-through Perspex work from Faith Tavernor is a vertical boxlike sculpture, one that incorporates the colours of the visible sea and sky with eighties-style abstract patterns in orange and brown screened on its sides. Its layering of transparent panels helps blend it into the surrounding air and scenery, and so become a relative of the much more evanescent Wheeler.

The last work I want to mention is Elaine Barry Conway’s hoarding warning us of global warming. It uses the language of advertising to ring alarm bells about the future of our beaches and coastal suburbs. With the Rangitoto Channel as its backdrop, the billboard encourages us to imagine the disintegration of the Southern ice cap and a future reconstituted coastline. It is totally serious but strangely funny too. The marketing phrase “On a beach near you,” on a signage method widely used by realty, brings a splendidly unnerving touch of black humour.

I went this year concerned that the work would be too closely situated together as it was in 2013. My ...

Women's Refuges should not need fundraising ventures such as this, but it does and it is incredibly successful, everybody gets ...

John, it is perhaps worth emphasizing that those "clueless juxtapositions" of which you speak were a curatorial decision... I can ...

John, it is perhaps worth emphasizing that those "clueless juxtapositions" of which you speak were a curatorial decision... I can say that the artists were given little choice as to where their work was placed. None of the artists I spoke to liked their placement so close to other works but due to their collective insecurity none of them felt confidant about speaking to the curator on this issue. The obvious, most egregious, example of this "clustering" was the orgy of works topped by Aaron McChonchie's piece.....the "city" comprising of his and two other artists' works. Each work suffered - perhaps terminally - through its visual proximity to the other two works. Mr Garrett what were you thinking???? A great piece on homelessness and shelter, [Harfleet], and an interesting work about communication, [McChonchie] peopled by colourful glass gnomes??? WTF??

Women's Refuges should not need fundraising ventures such as this, but it does and it is incredibly successful, everybody gets a pass as far as I'm concerned.

I went this year concerned that the work would be too closely situated together as it was in 2013. My concerns were realised and I felt very sad that all the work was not given room to breathe.
I don't understand why sculpture should be so closely displayed ( in some cases mixed together ) when there is so much open space.
Personally I thought Audrey Boyle's work was outstanding. 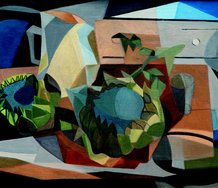