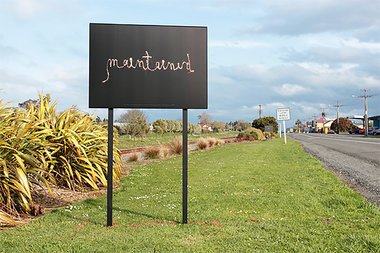 So we have two expressions of violence under consideration here. The violence of the panoptic principle, which cloaks itself in benign invisibility (“If you've got nothing to hide, you've got nothing to fear!”) as it works slowly, methodically to turn the world into an image of itself: ordered, docile, interchangeable. And Roberts' sudden, explosive violence of individual protest; the marginal attempting to storm the center.

In the lee of the eastern slope of Mount Taranaki on a thin grassy verge between train tracks and State Highway 3 are eight modestly sized billboards that hail you as you enter a town named Midhurst. Traced against each black void are sparkling cursive words that cut behind each other like cue cards as you drive past. At driver’s speed it’s a bit of a blur but looking again on foot the following phrase reads out: WE HAVE MAINTAINED A SILENCE CLOSELY RESEMBLING STUPIDITY. The verso reveals that these are artworks by Ann Shelton, hosted by the Govett-Brewster as an off-site exhibition.

The piece, titled doublethink, is part of a larger suite of works Shelton created during a residency at Tylee Cottage in Whanganui and shown at the Sarjeant Gallery late last year. The origins of many of Shelton’s photographic series often come from research into the histories of specific geographic sites and regularly focus on violent and tumultuous events in those histories. In this instance the inspiration is the case of Neil Roberts who in 1982 attempted to destroy the National Law Enforcement System (colloquially known as the Whanganui Computer) by exploding a homemade gelignite bomb at the building the database was housed in.

The controversial system, which stored data accumulated from the Police, Justice and Land Transport agencies, was seen at the time, on the one hand, as cutting-edge police technology with the then Police Minister Alan McCready describing it as “probably the most significant crime-fighting weapon ever brought to bear against lawlessness in this country”, and on the other as a vivid symbol of the authoritarian Muldoon era. Roberts’ bomb was detonated but only at the outer gate causing minor damage to the premises but killing himself instantly.

The phrase seen at Midhurst is taken from a tag Roberts made to the interior wall of a public toilet nearby just prior to exploding the bomb, ending it with the Ⓐ sign and “anarchy - peace thinking”. Midhurst itself was the place Roberts moved to in order to plan his protest in secret. Roberts’ background and the subsequent speculation over his motives are covered in excellent detail by a contextual essay by the Govett-Brewster’s Meredith Robertshawe. Here I’d like to reflect on doublethink‘s place in Shelton’s longer project of exploring the medium of photography.

Shelton’s work in way or another deals with the problem of the archive. That is, the measurement of phenomena and its collation and storage for potential future use. She has done this quite directly with A library to scale (2006) but in most cases it is implied through the photographic registering of the absence of past events at physical locations; treating site and landscape in general as an archive to read history off of. In a sense her oeuvre becomes a kind of shadow cabinet to the official stories the events she covers are embedded in. For example she photographs the scene, some decades later, of the murder committed by Juliet Hulme and Pauline Parker that scandalized the country (and inspired Peter Jackson’s Heavenly Creatures) or the site in central Wellington that once housed the city’s gaol (now a primary school) that performed hangings until 1923. In this way Shelton mimics some of photography’s utilitarian functions - forensic and historiographic in this case - but with the evacuated scenography of her images throwing their documentary value into question. This has been a prime move for art photography for some time, but the interesting consequence here is the suggested incitement to discourse that her images produce. The backstories to the images are always reported on and discussed at length (in any commentary such as this one), resulting in an ironic return of the documentary.

doublethink builds on these themes but departs in a crucial sense so that the pictorial is replaced by the textual. The image becomes missive. Pamphlets reproducing the eight billboards and detailing the background to the show and the life of Neil Roberts can be picked up in local stores in Midhurst, and Shelton’s artist talk at the Sarjeant was live tweeted. One could cynically put this down to the artist’s seeking of publicity for it seems Shelton wants the story to go viral. doublethink shifts emphasis away from photography’s well known that-has-been aesthetic properties to its contemporary status as provider of information.

doublethink also connects to the archive in an obvious narrative sense: Roberts tried to blow one up. Other works from the Tylee residency deal more empirically with the relics of the database. Photography has of course had its fair part to play in the history of criminology and the panoptic impulse of modern powers. This has been brilliantly critiqued by the late Allan Sekula in his essay ‘The Body and the Archive‘ which details one Alphonse Bertillon, the inventor of the mugshot, and developer of the practice of anthropometry: the standardized and systematic recording of subjects unto the law all the way down to producing photographic typologies of the varieties of ear curls. Today’s data-miners and insidious digital surveillance technologies are the sophisticated progeny of the same impulse: as societies become more complex, more interactive, more mobile, more powerful monitoring technologies are invented to monitor it. No doubt it was this Orwellian aspect to the archive that provoked the libertarian sentiments of Neil Roberts.

So we have two expressions of violence under consideration here. The violence of the panoptic principle, which cloaks itself in benign invisibility (“If you’ve got nothing to hide, you’ve got nothing to fear!”) as it works slowly, methodically to turn the world into an image of itself: ordered, docile, interchangeable. And Roberts’ sudden, explosive violence of individual protest; the marginal attempting to storm the center. This provides a nice example of the distinction the philosopher Slavoj Zizek makes between what he calls objective and subjective violence. Subjective violence, he says, is associated with the actions of individual agents and is highly visible. It’s this kind of violence that serves as grist for the global news media and Hollywood storytelling and as is often perceived against a background of implied peace and calm. Objective violence is systemic, cannot be identified with any individual per se and structures the possibilities for subjective action. It is also a figure/ground relationship and even though doublethink forgoes the pictorial its exhibition on Mountain Street, Taranaki in a way indicts the manufactured vista all around it, captioning it. From there the cultivated silence and stupidity starts to float and doublethink casts its judgment far beyond Neil Roberts and the Whanganui computer.

While the world of Shelton’s art can feel overly Manichean in its sharp contrasts and dualities it does exhibit a kind of solidarity for its misfits. But it is one that maintains a distance and remoteness from them. This may be the necessary aestheticisation that suppresses photography’s other utilitarian and spectacular functions. This separation might also be not only perceptual but ethical, for the gap opened by Shelton’s re-presentation of past traumas allows us to rethink our own positions  - and the margin of freedom (those decisive moments, to use an older adage) that is present in every act.