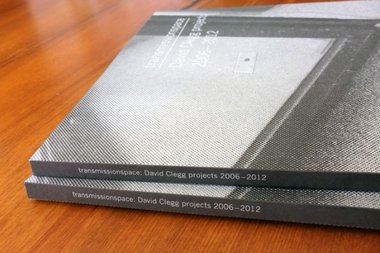 The book functions by physically making you turn the relevant pages and compare them with the clearer and less tonally muted photographs online - as part of your desire to access the sound component, to find the links. You have to contend with the reordering of some material and the smeary abstraction of aural and visual image.

Focussing in his most recent projects, transmissionspace: David Clegg projects 2006-2012, is an unusual risograph printed publication from this New Plymouth artist. It juxtaposes writing about - and documentation of - two gallery exhibitions in Auckland and Dunedin, with a ‘performed’ outdoor installation (in 4 stages) in Hobart, splicing in photographs of footpaths, malls and parks acquired from earlier trips to Berlin, Paris and Santiago with parallel images from Hobart and Dunedin.

For each show sample examples of Clegg‘s ‘field’ documentation have been selected, photographs and sound recordings (links provided) similar to those found on his previous project websites: the imaginary museum and archivedestruct. Some Chilean images from the latter have been incorporated.

The book though has its own identity, being carefully constructed as a self-contained publication. The stencilling process that is part of the risographic procedure gives the ‘translated’ images a different, grainier, more matte and muted midtone feel than the equivalent photographs on the websites, and for the three projects, the selected sequences of photographs and matching online aural recordings have been shortened, their order altered. Linking connections between the three have become accentuated.

The first in the book is Clegg‘s most recent project, transmissionspace and the index of atmospheres, held at St Paul St (2012). It dwells on the complexity of thought and memory, presenting mental ‘chords’ made up of three kinds of ‘note’ that hover stacked and blended in the artist’s (and later partially the visitor’s imagined) state of reverie. One note is a sequence of black and white photographs taken in a public park adjacent to a major French or German gallery, another is a specified work Clegg has experienced and enjoyed within that art institution which he now remembers, and the third is a suite of sound recordings made with the taking of the photographs. We grasp at a mood, a feeling acquired by the mingling of these recollections and direct image sensations.

Next in the publication is the failurespace project that was part of David Cross’s Iteration again (2011) Tasmanian event. Here Clegg’s outdoor installation was repeated over four weeks. For this he made daily posts of photographs and edited sound recordings available on a tumblr account, and interacted palpably with the sites by dropping printed photographs of them amongst the detritus of the inner city Hobart streets. Texts based on the local sound recordings were written on the back of each abandoned C-type print, barely discernible spoken phrases the artist detected amongst the static, hums, random clicks, squeals, traffic noises and background music picked up by his binaural mics.

These snippets are run together with the ambient noise so dominant you have to strain to hear the putative spoken phrases that collectively make up a sort of ‘found’ poem. Sometimes you miss them altogether and hear other verbalisations instead. The vocal intonation often completely surprises, even if the printed sections of transcript are accurate. The stressed emphasis and fragmented emotional content catch you unawares.

Clegg’s earliest included project was in Dunedin Public Art Gallery in 2010. In this David Clegg Rerecordings 2006-2009 section, double-stacked photographs are juxtaposed on double-page spreads so that images from Santiago are usually placed alongside others from Dunedin. The blurry shopping mall sites - despite their geographical and cultural separation - seem identical, as do the recordings, except for the intrusive sounds of the occasional juke box or piped music. Because of the enclosing architecture, the sound is echoey, helping obliterate in many cases the obvious rhythmical and lyrical differences between spoken Spanish and English. Clegg’s recordings are sequenced so you can click on the bottom of the first image in the series (matched with the book) and it automatically runs through the lot.

The book functions by physically making you turn the relevant pages to compare them with the clearer and less tonally muted photographs online - as part of your desire to access the sound component, to find the links. You have to contend with the reordering of some material and the smeary abstraction of aural and visual image. The choppy and fragmented recordings are mirrored by your incessant turning of pages, the muffled vagueness of the sonic space also replicated by the low definition, indeterminate static forms created by the moving camera.

It works tightly with your screen, this thin but elegant publication, cajoling you to rethink, relisten, reread and rethink - an ambiguously informative meditation on the corporeal and the cultural, the spatial and the mechanical, the expanded and the compressed, the frenetic and the still.