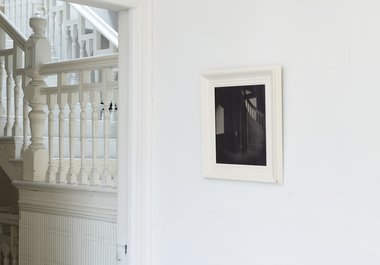 The first photograph in the show is entitled The Waiting Room. The subject is an austere room with a staircase winding up around a closed cupboard in the foreground. The alternative Cauchi offers here is ascent or detention. It's an either/or situation. The waiting room is where you are when you expect to be somewhere else, and this claustrophobia of uncertainty and frustrated expectation saturates Cauchi's images.

Ben Cauchi’s enigmatic imagery has captured attention because of a blend of historical practice along with its being a visual equivalent of the bending of time and space first imagined by Einstein in his General Theory of Relativity just over a century ago. This advance opened up a breadth of speculation later to envisage - among other things - the existence of Black Holes, those sites of a dark, dense gravity having a rich parallel in Cauchi’s imagery. We may honour the inventor of the wet collodian process in the early 1850s for this photographer’s technique, but we must thank Einstein and his disciples for our knowing how the place the imagery here and now.

One of Cauchi’s subtler tricks has been to rely on a general belief in the medium’s verisimilitude on the one hand and to question the very same belief on the other. The conjuring so familiar in his work as a subject is conceptual as well as visual.

He’s been in Berlin for the past year on a Creative New Zealand residency, and followers of his imagery have been eager to see what effect a year in such an historically potent site might have had on work already so attuned to the nuances of history. It’s not just a case of nuance either. The chronology assumed to be one of the bases of historical lineage is upended by his practice; shaken and stirred. This, his first solo show at Peter McLeavey Gallery, has been the opportunity to see what he’s been up to in the German Capital.

The thirteen images range from familiar territory to small but suggestive new directions. The veils and shroud-like imagery persist, albeit in a more self-assured way. In a New Zealand context these elements suggested more general considerations around the nature of perception and of perception’s relationship with truth. In a Berlin context the same elements can raise more specific questions about perception and truth in relation to German history, which immediately adds weight and complexity to the new work. It’s slightly unnerving to discover that the way light falls in the German studio resembles closely that of the legendary McLeavey rooms. The old “harsh clarity” debate suddenly moves into a higher gear when the harshness and clarity becomes not so much about actual light but recent history.

History is a construct attempting to make sense of what happened. So there are two aspects of seemingly “the same” thing - the what happened and the making sense of it -the two always in a volatile relationship. Establishing the facts is one thing but interpreting their significance is another. Did six million Jews die during World War II? If so, was it a “holocaust” in some way the earlier genocide of the Armenians wasn’t? And were all Germans somehow complicit in the Nazi scenario? Is the modern, vital Berlin a triumph over it, or is it in some way part of a continuing denial? Great potential for a uncovering disturbingly harsh clarity there.

This maybe/maybe not situation is reflected in many of the show’s either/or titles: The False Stage (the real stage and its deviant), Insomnia (sleep and its deprivation), Doppelganger (a real thing and its double), Smokescreen (something obscured by something else), Equivalent (a parallel version of an original) and so on. This indicates something central to Cauchi’s practice, the way he consistently delivers an image with the possibility of alternative readings but with no clue as to which the “real” one might be. That there are readings and that there is an alternative are the only certainties he deals with. He stops short of providing enough facts to suggest any sort of comprehensive, comprehensible truth. His photographic truth has little to do with the subject matter. Instead, the ambivalent situations he depicts are faithful witness to our own perceptive and moral dilemmas.

The first photograph in the show is entitled The Waiting Room. The subject is an austere room with a staircase winding up around a closed cupboard in the foreground. The alternative Cauchi offers here is ascent or detention. The title of this work could be the title of his project. Again, it’s an either/or situation. We could be in whatever room is beyond it - which, ipso facto, is the real room to be in (maybe it’s the room of truth, of absolute knowledge, of certainty?) - but we’re kept waiting in an anteroom. Will the doctor see us? Will the bus ever arrive? Will the Will be read in our favour? The waiting room is where you are when you expect to be somewhere else, and this claustrophobia of uncertainty and frustrated expectation saturates Cauchi’s images.

A sense of confinement is, of course, not entirely unexpected in a body of work largely depicting dark, depthless rooms. The size of the camera and the messy process he uses pretty much keep Cauchi at home mucking around in his studio. There are two modest images in the show, however, depicting scenes beyond four walls. The first, inevitably homage to Alfred Stieglitz’s great late series Equivalents, is a view skywards of whispy clouds and is entitled Equivalent, which is singular in more senses than one. Indeed, given his project Cauchi doesn’t need plurals; they are implicit in his singulars. Just take another look at those titles.

The second nature snap, at first sight, pays homage to Pictorialism. (And there’s a nice “co-incidence” here: the young Stieglitz was a keen and expert Pictorialist when studying in Germany in the later 1880s.) A fuzzy group of largely leafless trees is entitled Grunewald, a park in the eastern sector of Berlin. The alert art historian is likely to seize on an Issenheim Altarpiece connection - you have already? - and it would seem a not unhelpful association given the grim and sometimes bloody goings-on in the park depicted. The site of intelligence gathering and its consequences -persecution and political control - during and after World War II, Grunewald remains its own Black Forest in local memory. Cauchi’s image is no innocent Sunday walk in the park.

As an exhibition The Hidden Veil reveals a steady hand on the tiller but with a few intriguing exploratory tacks to left and right. Cauchi’s Berlin experience is not immediately evident, but then local colour has seldom been his business - in much the same way there are no camels in the Koran. On closer inspection and on deeper reflection, however, it’s clear his business has opened a new office in the German Capital, the new waiting room of his symbolism, photography’s old realism.