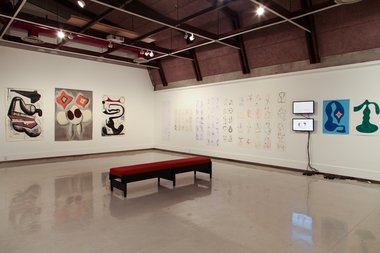 Old School seems like the work of a veteran maker of images, hitting his pace with a maturity and conviction that is unremitting. There is a lyricism and musicality to these images, an economy of design, a weighing up and shaping of form and a care and attention to mark-making and measuring of space. Old School gives due attention to the art object as its primary subject of interest and in its realisation and reinvention.

The history and reputation of the University of Canterbury School of Fine Arts is often epitomised as the story of a loose-knit arts community. One that begins with Sydney Thompson’s sketch club in the early 1900s, followed by the Group in the 1930s and 40s and, in the late 1980s, the generation that Mark Braunias shared his years at the School of Fine Arts with: Shane Cotton, Tony de Lautour, Peter Robinson, and Seraphine Pick. Such has been the status of these and other artists frequently associated with them (Saskia Leek, Grant Takle, Chris Heaphy and Bill Hammond) that they have formed the subject of exhibitions that have argued the case for commonalities between their practices; Robert Leonard and Lara Strongman’s Hangover (1995), Elizabeth Caldwell’s Sky Writers and Earthmovers (1998) and even Saskia Leek’s current survey exhibition Desk Collection (2012).

Of course, the question of place, region and socio-economic environment as being critical to shaping the collective identity of any group of artists is contestable. The notion of graduates from the University of Canterbury School of Fine Arts in the late 1980s as a group of ‘pencil-case painters,’ for example, may have more to do with Neo-Expressionist painting than it does with the city of Christchurch. Yet, for those who favour regionalist theories, Mark Braunias‘ Old School - the exhibition and the essay by Richard Fahey in the accompanying catalogue - puts forwards the best argument and evidence yet made for the notion of a community of artist - one skilled in modernist principles, emerging in the late 1980s as the first generation of Post-Modern painters in Canterbury.

More immediately however, the drawings that make up this exhibition have their origins in Groove Zone Shuffle, a proposed large-scale mural by Braunias, commissioned by the Christchurch Art Gallery for its anniversary Outer Spaces programme, Populate, in May this year. Intended for the Rexel Building on Lichfield Street, the refusal of a neighbouring property owner to allow the artist and gallery staff access to the site brought it a halt. So Old School is a series of working drawings for a now-imagined public artwork and also an exhibition with a title that alludes to Braunias’ years at the University of Canterbury’s School of Fines Arts (1985-1987), and his exposure to drawing principles centred upon formal and spatial considerations, under the guidance of lecturer in painting and art education (1975-2002), and later HOD of the School (1990-2001) Ted Bracey.

If it is possible to talk about a collective of painters cultivated by the University of Canterbury School of Fine Arts in the 1980s, then on the evident of Old School, its genesis resides in Braunias and other graduates who became skilled in Bracey’s modernist principles and his rejection of Gordon Tovey’s dominating theory that art was first and foremost an intuitive and creative act. Bracey maintained a distinction - art was a rational and ‘knowable’ discipline. He emphasised learning by example that art was something realised through the knowledge and experience of long-standing traditions of making and thinking about art. Richard Fahey’s essay in Old School reflects on the dilemma and paradox that he, Braunias and other students then confronted at the School of Fine Arts, making artworks informed by ‘a convention of the unconventional.’

In referencing this phrase from his days as a student, Fahey also provides a context for the works that make up Old School, and Braunias’ allegiance to modernism and his complementary appropriation of images from all possible sources. Braunias’ iconography remains consistently generous and egalitarian, fluctuating through time, place, culture and ideology: Pablo Picasso, Carl Barks, Joan Miró, Basil Wolverton, Mayan Art, Brancusi, Hans Arp, Francis Bacon, Robert Motherwell and Tex Avery’s Bugs Bunny, all seem to be vying for attention just below the surface of these images in the most rowdy, elegant and measured of ways. These drawings are as resolved and singular as they are ideas in progress for artworks still to be considered and made. (However, it is also worth noting that Braunias’ animated biomorphic fabrications are each consistently contained and complete in themselves within the four corners of the picture plane). Old School seems like the work of a veteran maker of images, hitting his pace with a maturity and conviction that is unremitting. There is a lyricism and musicality to these images, an economy of design, a weighing up and shaping of form and a care and attention to mark-making and measuring of space. Without needing to overstate its case, Old School gives due attention to the art object as its primary subject of interest and in its realisation and reinvention, evidence of the artist’s ability to continually renew his practice.

Any consideration of recent works by artists like Tony de Lautour, Saskia Leek and Shane Cotton, similarly shares this connection and understanding of modernist principles. Attending the University of Canterbury School of Fine Arts at the moment when modernism became somewhat unfashionable to many factions, these artists all graduated into a Post-Modern world in which deconstruction and appropriation held centre stage. Yet, it is now clearly evident that the education and modernist principles that Bracey imparted to Braunias and his contemporaries has continued to shape their work, ensuring its vitality and longevity. As the University of Canterbury currently reviews the School of Fine Arts, and no doubt considers and takes note of its history and influence, it is difficult to believe that it will not consider the rigour, example and success of Bracey’s legacy, as it seeks to stake out new territory, moving into the future.