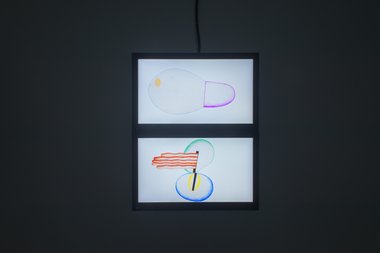 This little exhibition features a group of Braunias’ pastel drawings that he has animated with Jill Kennedy for six projected loops - and then brought in John Payne for electronic sound effects. The results are an exciting, whimsical installation that has a vaguely Eastern European sensibility where narratives using abstract shapes are slyly hinted at in a subtly comic manner - perhaps a carry over from 1991 when Braunias lived in Prague working as a cartoonist.

Textured paper, tonally gradated colour and sticky tape are used for cut out shapes or lines that gently move. There are lots of simple oval shapes that seem to refer to eighties Italian artists like Palladino or Cucchi, likewise sausages to the German artist Polke - mixed with incongruities like spaghetti descending from strange slits or flying horizontally like rippling flags.

The six film loops are grouped so that the first two - Egg Head and Shit Face, on plasma screens - are stacked one above the other on the first wall, by the entrance. At the other end of the small rectangular room, the last two - Intake and Suck, projections - are butted alongside each other. In between, two single isolated works - Blue Guts (plasma screen) and Open Mouth (projection) - are separated on the long wall.

This is an excellent collaboration, for Kennedy is highly regarded as a filmmaker. That Payne was asked to provide a soundtrack is also a shrewd move. His creaks, whistles, clangs, plops and burps perfectly suit the comic ambience of the imagery.

What I like is the understated, airy lightness of this simple - but rich in associations - kinetic imagery. It is linear and delicate with no dense, brightly coloured shapes. Linear with only a hint of volume or hue - with just a restrained smudge of tonal modulation. Usually slow but occasionally frenetic, some seem a sort of logo: quirky motifs for possible branding in public spaces, and so vaguely sardonic. Hypnotically compelling, they’re hard not to watch. With this brilliant collaboration we see Braunias at his very best.