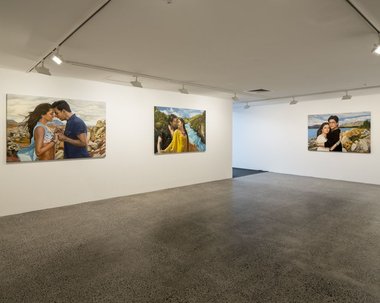 So what if these pictures were not painted but actual glossy, blown up, photographic film stills. Or even faked Photoshopped film stills based on (like these paintings), posters and postcards: blended together and then printed on paper or plastic. There are questions of craft here, of manual dexterity and drawing - plus qualities of surface, sheen and smell - associated with painting. Would anything be lost?

Bepen Bhana
Postcards from the Edge

I have only seen Bepen Bhana‘s work once before, and that was a set of billboards he made for the Te Tuhi Reeves Rd artist hoarding site, almost two years ago - so this current show surprised me. He’s still looking at marketable, very beautiful, bodies, but they are now fully clothed, with celebrity faces added, and (most importantly) with touristy New Zealand landscapes incorporated as backdrops. These lush oil paintings present imagined movie stills inspired by a strategy by Tourism New Zealand to have our scenic hotspots incorporated in romantic Bollywood films, by way of packages offered Mumbai companies planning film shoots.

The six iconic tourist sites here (Lake Tekapo, Aoraki [Mt.Cook], Milford Sound waterfall, Castle Hill Basin, Southern Alps, and Huka Falls) are also part of this country’s art history. Without the foregrounding glamorous couples, the images could be straight out of the Kelliher Art Prize. With their embracing and clinching these representations are unabashedly extolling the values of romantic heterosexual love. There is no poststructuralist critiquing here of global consumerism, the nuclear family, or the blissfully paired prosperous subjects, unlike say the acerbic imagery you might get with an artist like Martin Basher. These images are pitched at believers.

What if these pictures were not painted but actual glossy, blown up, photographic film stills. Or even faked Photoshopped film stills based on (like these paintings) posters and postcards: blended together and then printed on paper or plastic. Would anything be lost?

Obviously there are questions of craft here, of manual dexterity and drawing - plus qualities of surface, sheen and smell - associated with painting, quite a different tradition from photography.

Once there was greater financial investment in the construction of paintings, but now that has changed. It is currently much cheaper to make a painting than to make an equivalently sized photograph. Even so, a set of six large photographs might have been better.

Well without any fine art (painting) baggage, such scenic/portrait reproductions would have a greater focus, linking film narrative more closely with tourist postcards. The obvious promotion of love and marriage here is very different from some of the paintings of couples (like Mr and Mrs Andrews) as found for example in the work of Thomas Gainsborough of two hundred and sixty years ago. The image is not about property, social status or economic partnerships, but more about engendering of desire, bodily self-esteem, artificial juxtapositions (with attendant ironic humour) - and, of course, product placement.