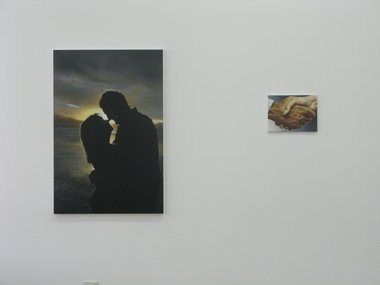 That these images are painted is obviously something Basher intends to be built in to their meaning. He could have made them photographically, or used tweaked readymades, but he here seems to think it is important that they are skilfully hand painted - being marketable commodities that perpetuate the same consumerist values he is attacking. This is confirmed by the contents of his New York sculpture-vitrines.

Continuing with his interest in global consumerism and the commercial manipulation of desire and romantic fantasy, Martin Basher further develops ideas earlier explored in his first two exhibitions at Starkwhite. Here, in this presentation of nine oil paintings, there are three sorts of image: tropical beaches at sunset, sometimes with the obligatory embracing lovers or silhouetted palm tree; clasped hands being shaken; ‘optical’ abstractions of interlocking dark vertical bars.

Made during a residency at the McCahon cottage in Titirangi, these brushed on images come from webwide digital surfing, not local sandy locations or sets with models. The paintings are conceptually linked to an exhibition Basher is participating in of public sculpture (Total Recall), held right now in New York as part of the Public Art Fund. He is the first New Zealander to participate in that project.

His works consist of three very large cubes of one way mirror glass that cannot be looked into by day but which reveal their contents at night via internal illumination. They contain other Basher paintings, some posters, and various luxury goods displayed as if for sale.

Basher’s Starkwhite show conceptually interacts with this. The mirrored surfaces are a parallel to the abstract bar paintings that alternate between light and dark and often have a transitional zone in their centres of shimmering tonal variation. One larger work, THE SUN GOES DOWN EASY AND YR CHILLED SPIRIT WITH IT, besides commenting on touristic escapism, references ‘freedom’ with its prison bars and sunsets under cloudless skies. The smaller abstractions are fascinating spatially, with the lines clinging to the flatness of the modernist picture plane while also hinting at projection. They are also sinister like wire egg-slicers or collapsible like slatted wooden stools.

The other paintings have oscillations that are not visual but semantic. The hand shakes (loadedly called SHAKY HANDS) feature hands of different races, genders and ages. Traditionally shaking hands is done with right hands but here some left ones are included, as if to undermine the meaning of the contractual or introductory/friendly acts depicted. To smirk at such declarations of good faith and sincerity.

The two beach images are just as ambiguous. The palm tree one consists of two frames from a film, denying its ability to serve as a ‘realistic’ illusion while the other of a couple hugging has the man given a compacted head shape that is slightly odd (vaguely simian) for Hollywood templates of masculine beauty.

In his previous exhibitions Basher used Christmas card conventions for his wintery landscapes and rebuslike juxtaposing structures for his visual critiques of ubiquitous consumerism. This show is more preoccupied with the use of irony, a critique made by avoiding replication and incorporating subtle twists instead - something not self evident but which needs pointers (other than the sardonic titles) to ensure the intention is grasped.

That these images are painted is obviously something Basher intends to be built in to their meaning. He could have made them photographically, or used tweaked readymades, but he here seems to think it is important that they are hand painted - being marketable commodities that perpetuate the same consumerist values he is attacking. This is confirmed by the contents of his New York sculpture-vitrines.

The question though remains: is Basher is trying to have it all ways at once? That he wants to sell his artwork to make a living while also cheerfully (albeit subtly) criticising the people who buy his product and the art commodity system that encompasses the whole marketing/selling process. The work is not about a rueful acceptance of the laws of capitalist fiscal exchange as if they were ‘natural’ events being ‘neutrally’ observed, but an intended act of subversion via perpetuation - one that in the long run ends up being illogical with a double standard.

Here are two discussions of the process. Some galleries ignored his censure, others heeded. http://www.art-newzealand.com/Issues11to20/apple.htm http://www.e-flux.com/shows/view/6753

Curious- so what was the outcome of Billy Apples work?

Logically, it needs to be not sold to succeed. This reminds of Billy Apple's work in his tour of 1979 ...

Nice point Matt, about absorption of critique into the market. Of course this is a collector (not the artist) who is profiting, but the question is, are such attacks worth it?
Well for a start there are these conversations - like this for example.

Sure it’s the collector who is profiting; however Lawler did make five copies

“Are such attacks worth it?” For quantifiable outcomes probably not, but I personally never thought of art as providing answers or solutions to the problems of the (art) world. For me, it’s more about asking questions that may be taken up in another arena (such as this), or part of a larger whole in this case an institutional critique of the consumerism of art.

It is somewhat a moralistic question on whether Basher is trying to have it all at once, by selling to the people who he is criticising. I think it would be more valuable to ask is his work more interesting if it does not sell than if it does (or vice versa).

The funny thing is that with institutional critiques, many of those artists are lecturers employed by universities eager to increase enrollments through the publicity their work generates.

With Basher's work, why would it be more interesting if it does not sell? Maybe it worries potential buyers that the artist might be laughing at them, or that its sophisticated ideas are too ambiguous?

You think it is highly marketable? Is that because of its skill factor perhaps?

Maybe I should rephrase the question, does it need to be sold to succeed in critiquing consumerism?

Logically, it needs to be not sold to succeed.

This reminds of Billy Apple's work in his tour of 1979 which was like a school teacher marking the quality of each space that he exhibited in. He used red paint to highlight 'bad' elements he wanted changed.

If those aspects were not 'improved', then it implied the critique was ignored and thus a failure. There was logic where the aftermath of the show determined its success.

Curious- so what was the outcome of Billy Apples work?

Here are two discussions of the process. Some galleries ignored his censure, others heeded.
http://www.art-newzealand.com/Issues11to20/apple.htm
http://www.e-flux.com/shows/view/6753