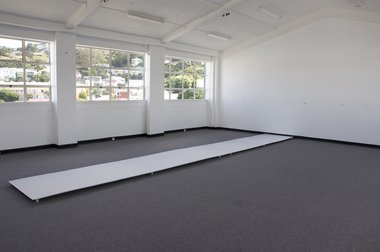 The audience moves around Interface unaware that the steps they take echo the artist's own trajectory, as she photographed her studio wall. But is this work also about that gigantic subject - the void, or am I off on another tangent? In literature Moby Dick depicts oblivion in the jaws of terrifying whiteness. In the gallery context, I couldn't help but wonder if Interface was also about an experience of terrifying whiteness?

It’s not every day an artwork gets damaged by an air current during a fire drill. But that’s exactly what happened to Interface, a photographic print by Molly Samsell, exhibited last year in a group show in the Hancock Gallery (at City Gallery) called The Un-sited. (Insert your own irony here.)

The Un-Sited featured non-representational works recently acquired by the City Gallery which, according to their website, complicated ‘…the concepts of site’ so central to civic collections. Indeed. No one could have predicted that Interface would have its perfect surface ruffled by a smoke evacuation fan. We tend to think of artworks and buildings as inert, yet they can interact in surprising ways. What happened to Samsell’s print was an accident, one of those behind the scenes events that usually remains invisible. What’s interesting is her response. This January, she exhibited the re-worked piece during a one night show at City Gallery, displayed in the same place as the original.

Interface - both the first and the reworked version - is an image of Samsell’s studio wall. The work’s most startling and immediate feature is its length - at eight and a half metres long, this photograph is a continuous unbroken white line that was technically difficult to produce. Its panoramic length reminds me of Robert Altman’s film The Player, famous for an opening panning sequence that lasts over 7 minutes without a single camera break. The Player certainly has no direct connections to Samsell’s practice. (Or vice versa.) Altman’s film is a satire, littered with in-jokes about Hollywood’s commercial infrastructure.

Samsell’s work doesn’t have any obvious sense of humor at play; she’s an artist with a background in astro-physics who makes site-specific photography. However, Interface is a technically complex work that exposes some of our awkward social behavior in the white, bright, light of the contemporary gallery and raises anxieties about artistic production in our post-medium, post-everything art world.

Samsell told me Interface is a derivative of the original, pointing out that there are multiple derivatives in the photographic process. The print is a derivative of the negative. The negative is a derivative of the initial subject or experience. This work was produced for her Master’s thesis at Massey and as such was shown on the floor, perpendicular to her studio wall. (In mathematics she tells me the second derivative can be used to define the perpendicular to the tangent…) For me a photograph of a studio wall conjures an image of the artist alone in a white cell wondering what the heck to make next. But that’s probably just my own projection. Is Interface, in part, a work about drawing blanks? There’s a sly transition at stake: the studio wall becomes the gallery wall.

Samsell says her work is always a response to the space in some way. The audience moves around Interface unaware that the steps they take echo the artist’s own trajectory, as she photographed her studio wall. But is this work also about that gigantic subject - the void, or am I off on another tangent? In literature Moby Dick depicts oblivion in the jaws of terrifying whiteness. In the gallery context, I couldn’t help but wonder if Interface was also about an experience of terrifying whiteness?

White is a neutral, not a colour, yet it contains the symbolic resonance of spirituality, of sophistication, of good taste (and occasionally bad taste e.g. Don Johnson’s suit in Miami Vice). White is also used to signify nothingness, the blank slate, empty space. We refer to the contemporary art gallery as ‘the white cube.’

On the night of the opening this January, I’d expected to come and find Interface lovingly restored. Instead Samsell had chosen to accentuate the imperfections. The print is now littered with holes, its pale surface broken like skin. A friend at the opening said, ‘it looks like silverfish have been at the work.’ I thought this a rather lovely idea. A fleet of transparent silverfish crawling all over the print, munching on it like caterpillars chewing on a leaf.

Samsell had spent weeks sanding the photograph, highlighting the multiple creases and frown lines caused by the air current. ‘I could have kept sanding it,’ she said.

At the opening we all agreed the work had been improved by the damage. Visitors peered intensely at the surface of the print admiring the holes. We were at a one night, one work show. The light in the gallery was shadowy, everyone seemed uncomfortably aware of the voluminous space. This isn’t a put down. Samsell’s background in astro-physics means she’s ideally placed to produce artwork that examines so-called ‘empty space’. A previous body of her photographs, Horizons, consists of close ups of window ledges and skirting boards. The horizon lines running through domestic landscapes are located simply by switching scales. The infinite is contained in the finite, the original within the derivative. Samsell shows us the links.

I noticed at the opening visitors repeatedly called Interface a really beautiful work. The damaged surface was beautiful, yet I wondered at some level if we were avoiding talking about the obvious? Our behaviour in the gallery reminded me of the well versed ‘players’ in Altman’s film. Essentially we were approaching a long white expanse of wall and on that wall was a long white expanse of a work. This was our Interface.

‘What’s it about?’ I asked the artist.

It was only just now that I recalled this Richard Wilbur poem "A World Without Objects is a Sensible Emptiness", ...

Yes, Samsell's work is always relative to the space in it is in. She draws a lot on mathematical and ...

I also thought this piece was lovely. And I thought of Robert Kaplan's essay, "Is It Out There?," in which ...

This Discussion has 5 comments.

Really lovely writing, Megan. Perhaps the "whiteness" can be read as sort of like the background radiation that permeates the emptiness of space, where matter fills only the tiniest percentage of the volume (though in interesting ways - like stars, galaxies, and our own faint dots on the dust mote of Earth).
Clearly it works well as a subtle riff on classical minimalism, but I love the astrophysical angle - it appeals to the sci fi nerd in me.

Thanks Andrew.
Yes, it was an interesting work to consider and I like your idea about radiation and the difference between matter and space.
It also made me aware how desperate we all are to 'see something' (not unreasonably) when we are at a gallery. I am usually someone who loves content and representational works - however I saw Creed's Turner prize winning work years ago and have to say I found it abundantly pleasing on the day, strange, as it was essentially a chance to open a kinder egg and NOT find a toy inside. I especially liked one of Creed's video works in a side room, of an office door opening and closing in an empty space...

I also thought this piece was lovely.
And I thought of Robert Kaplan's essay, "Is It Out There?," in which he contemplates the so-called 'emptiness' of the universe (his essay was published in an exhibition catalogue entitled "Nothing"). In it, he articulates Osborne Reynolds's explanation in "On an Inversion of Ideas as to the Structure of the Universe" (1903): "...that there is no empty space, but that the universe is all compact of inconceivably small grains (their diameters are the seven hundred thousand millionth part of the wave-length of violet light), moving at about one and one-third feet per second relative to one another, along very short paths. They make up an elastic medium that extends to infinity, and in their piling account for everything we know." There is something interesting in Samsell's work that speaks of relativity and short paths leading to infinity...

Yes, Samsell's work is always relative to the space in it is in. She draws a lot on mathematical and scientific formulas in her practice - I am such an outsider to art now, I find that talk always seems to center around 'process' and 'practice' - I don't think these terms were in vogue when I was at art school, or maybe I just didn't notice.
I will check out the Kaplan essay...

It was only just now that I recalled this Richard Wilbur poem "A World Without Objects is a Sensible Emptiness", which pretty much sums um most of my thoughts on this work.