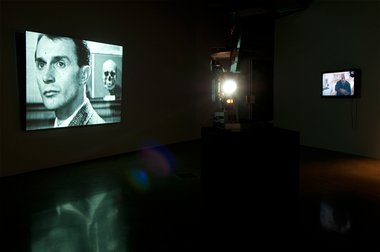 With the various filmed videos he made himself, for the observant questions are raised about von Wedemeyer's own authenticity. Close inspection indicates a predilection for blurring boundaries by being mischievous.

In this complex and multi-layered moving image exhibition (one originally created for the Barbican in London) the young German artist Clemens von Wedemeyer weaves a discussion around the nature of cultural encounter between ethnic communities met, with aspects of acting or pretence. The term to break through ‘the Fourth Wall’ is when an actor breaks out of character and speaks to the audience directly as themselves. In von Wedemeyer’s context the expression relates to authenticity, especially when pre-agricultural stone age communities appear to have no contact with ‘civilised’, technologically advanced ones - only to be considered frauds later.

The central topic is media coverage of the discovery of the Tasaday tribe in the Philippines in the early seventies. Interviewing both John Nance the maker of a documentary about the event, A Message from the Stone Age, and Ruggero Deodato, the maker of a sensational fictitious film, Last Cannibal World, inspired by coverage in National Geographic, von Wedemeyer presents their comments alongside his own filmed stage production The Gentle Ones. Here a group of English actors in the Barbican theatre dress ‘primitively’ and learn a ‘native’ language, moving to and fro between stage and audience seating. Also in the AUT show are videos of spliced portions of real events blended with faked ‘Hollywood’ encounters. Truth and fabrication are sometimes mingled together; other times juxtaposed but separate.

Von Wedemeyer is very much like the Argentine film director Lucrecia Martel who presents narratives that are visually ambiguous - the viewer is uncertain what it is they have seen and what that confusion means for their understanding of the characters in the story unfolding before them. This ambiguity is pertinent in von Wedemeyer’s project because many westerners believe (but not John Nance, or Lawrence Reid, a linguist) that the Tasaday were fake primitives set up to hoodwink the media by President Marcos. Fifteen years after the discovery their dwellings in caves were abandoned and they were found wearing western clothing, smoking and living in houses - as if that had always been their lifestyle, and not recently converted to it.

With the various filmed videos he made himself, for the observant questions are raised about von Wedemeyer’s own authenticity. Close inspection indicates a predilection for blurring boundaries by being mischievous: two videos have the same actor filmed under two identities - one as Geoffrey Frand an interviewed anthropologist (who initially is even reading a script), the other as an explorer’s friend played by Geoffrey Burton; in a projected film test an actress is erroneously claimed to have participated in The Gentle Ones (or else her name has changed). The artist obviously enjoys teasing his audience through discrepancies in explanatory media like the newsprint Barbican publication available at the show.

This complicated project, with its eleven components of film and printed matter, is very cleverly layered to generate tangential meanings. In the newspaper the cavelike architectural features of the brutalist modernist Barbican building (where The Gentle Ones was created) are mentioned, deliberately annulling distinctions between the civilised and stoneage (acted out or otherwise) communities being filmed. Other themes dwell on immortality for communities and for individuals.

Outside the issue of Tasaday (or his own) authenticity that von Wedemeyer likes to draw out, other bigger questions arise also. Of course there is the obvious one of what does it mean to be human and social (stone age or ‘civilised’).

But isn’t there an element of reflexivity here too? What of non-art loving audiences encountering an exhibition like this one? What is the nature of their first contact with the contemporary art tribe? What are our characteristics, if we are cohesive enough to be called a community? How would they describe us?

Would discovery by the wider group mean the end of contemporary art, just as ‘Geoffrey Frand’ believes the discovery of the Tasaday will mean their annihilation - even if they do encounter only sympathetic anthropologists and not predatory logging or oil companies? Is von Wedemeyer’s presentation of the Tasaday story a pointed way of advocating isolation for the art world, a wish that it pull back from seeking bigger audiences and popularity - and become more esoteric and withdrawn - that the term ‘art’ is now evaporated of any palpable meaning and needs to become more exclusive in its focus.

Perhaps I am reading far too much into it, have become too entangled in over-intellectualised, doodly, wild speculations, and that the work is simply an amusing variation of Arthur Conan Doyle’s 1912 novel The Lost World - one more entertaining story about time and geographical isolation - and not really about the authenticity of certain events in the early 1970s or groups like the contemporary art community? It’s a provocative, ambiguously stimulating exhibition.