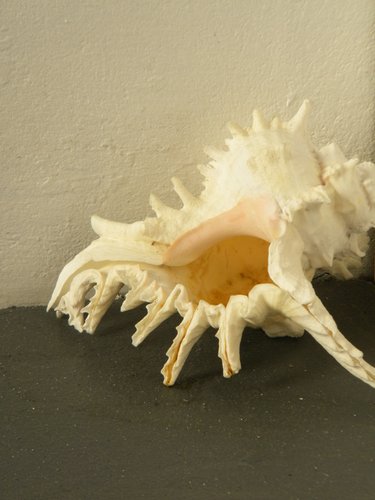 I saw a troop of youth and young manhood lounging out the back of the gallery near the Kentwood fire. This is an artist run space - old school style, no board, no trustees - and you can tell, there's that sense of barely suppressed mischief, the smell of must and damp and possibly old alcohol, that feeling that this is a place where people know how to have a good time, in their art and in their lives.

In terms of contemporary art driftwood is a bit of a no-no. It’s a material we expect to see used artistically in more earnest circles, the gift-shop, the local art gallery selling paintings of the land and perhaps by the tills, a fine catchment of silk scarves in swirling Gretchen Albrecht colours.

The latest show at The Russian Frost Farmers takes a light breezy attitude to the trope of driftwood and its taboos. This isn’t an exhibition where you’re going to see the best work by any of the artists involved, but it is a show with a bit of kick, just like a good spritzer. Caroline Johnston’s curation exploits the creative freedom of the artist run space and holds a mirror up to its landscape and laws - its island mentality - fraught with possibilities.

Simon Cuming’s work is a framed certificate announcing his citizenship in Ladonia. At first glance I thought this was a ‘made-up’ place but it actually exists - however tenuously. Ladonia is a republican monarchy located just outside of Sweden. It’s a micro nation, a country created by an artist (not Cuming!) that now has well over 15,000 citizens who are taxed only by contributing their creativity. I recognised Ladonia as a Utopia; the national anthem involves throwing a stone into the sea. It’s the only country I’m aware of that celebrates a day of the giant cockroach. Cuming’s work also includes a plaque of the green Ladonia flag, set into a bed of stones. Nestled in the stones are two speakers, playing the endless rush and hush of the sea. But this isn’t the real sea, it’s synthetic, made by the artist, a contribution of creativity.

Who are The Russian Frost Farmers? I saw a troop of youth and young manhood lounging out the back of the gallery near the Kentwood fire. This is an artist run space - old school style, no board, no trustees - and you can tell, there’s that sense of barely suppressed mischief, the smell of must and damp and possibly old alcohol, that feeling that this is a place where people know how to have a good time, in their art and in their lives. On one wall, a trio of small cartoon monkey ornaments sit in a hollow in the brickwork. My boyfriend said, ‘I think they’re a permanent fixture.’ I agreed.

Benjamin Buchanan is an artist who deserves more written attention. Buchanan has a history of making epic abstractions. He’s an artist and a musician and maybe that’s why he’s so good at producing work full of visual noise. His work is characteristically bold - full of planes of colours that snap, crackle and pop. ‘Driftwood’ sees Buchanan in pared back mode. His work is a cascade of wavy blue lines stickered to the white wall. It’s a simple work, instantly recognizable as the sea, the same way a troop of V’s drawn across the white horizon line of a page become birds flying.

The colour blue links the show thematically. A navy dog leash wriggles across the floor, perhaps dropped on route as the pet ran out the door at the opening (which I heard was pretty damn good.) This work by Matthew George Richard Ward (what a name!) was a great visual continuation of the wavy lines in Buchanan’s Tidal Forces. I’m at an age where I’ve seen the dropped leash/belt/ribbon on the floor many times in the name of contemporary art, but in the context of Driftwood I felt like I was for it, rather than against it.

Liz Allan’s sound piece stood out, effectively articulating the themes and concerns of the show. I put on the headphones and heard overlapping - distinctly Kiwi male - voices riffing on what it means to drift versus what it means to be current. There’s a nice play on the metaphoric possibilities of being at sea here, the value of currency ever relevant in the changing and fashionable art scene.

Rebecca Francis Lees has actually made a work out of driftwood for the show. A harassed bird, bloodied with aqua blue paint is suspended from the ceiling. This creature reminded me a bit of one of the Skeksis from the Dark Crystal and any reference to the Dark Crystal from me is a compliment. However, this piece wasn’t entirely successful, partly just because it’s technically difficult to make - then suspend - a skeleton from driftwood. I admired the ambition though and I like seeing contemporary artists use this ‘low brow’ material. Yvonne Todd has done some fantastically weird lurid pink still life photographs of driftwood, Lees also adds a splash of artificial colour to Feeding, playing on the jarring intersection of the natural and the synthetic.

I was intrigued but unconvinced by Johnston’s conch shell sitting in the doorway, its sloping lip filled with Chanel No 5. I couldn’t smell the perfume and it looked more like oil from where I was standing. I only knew it was Chanel No 5 because someone told me and it didn’t satisfy my quest for meaning in this instance. I didn’t dislike the work though, how could I? The conch shell is freighted with symbolism, the calling card of Ralph in Lord of the Flies, as he tries to summon the children together on their island, before everything descends into chaos…

Placed above the conch shell, Tao Wells’ contribution is a light blue pillowcase, stretched over canvas, the fabric transparent, so you can see through the cotton. The seam of the pillowcase runs down the centre like a bum-crack. This is a pretty base simile for a work that is actually delicate and rather lovely, not demanding too much from the viewer, content in it’s own way to be left alone. I also read ‘light blue’ as an understated nod to the realm of headspace, the world of the mind and its endless ideas, the thought that produces the art. There’s a lot of abstraction knocking around the scene at the moment, paintings neither big nor small, often with a bit of grime thrown in for good measure. I found Wells’ pillowcase a dreamy new addition to this canon, perhaps even a sly critique? Allow me to drift for a moment….

Once years ago, during the Teststrip era, I saw a small work in a student house on Williamson Avenue that read: ‘Who the hell is Giovanni Intra?’ I thought it was very funny and I’m sure the person who wrote it thought it was pretty funny too. Yet, at the same time it was a completely earnest question. The note writer had obviously never met Intra, but had heard all about him. The art scene has its niches, its figures of stature can become urban myths. Tao Wells is one of those infamous names. I’ve never met Wells, but he’s an artist with opinion and influence. He’s been attached to many interesting projects not least of all Letting Space and the furor over The Beneficiary’s Office. Joe Public will find little to placate his concerns about the productivity of artists in Driftwood. Yet that is of no consequence really. The Russian Frost Farmers is another Ladonia and the artists are its monarchy.