Hansen and Friends in Pakuranga 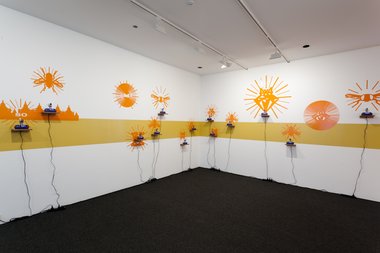 What is remarkable is how all these very different individual talents come together to make an apparently seamless whole. Because Hansen also performs as Vj Rex, he is an energetic and persuasive orchestrator of different sensibilities. The result is a dynamically rich multi-layered show with many references and a strong sense of cohesion and bodily immersion.

Eugene Hansen is an artist (trained in sculpture) and fine arts lecturer in Massey, Wellington, who with his partner Jenny Gillam, instigated and directed the project space, Show (2004-2006) a converted part of the flat they were renting. At Te Tuhi he is currently demonstrating another interest, that of sound art and installation, drawing in seven other varied collaborators to construct a substantial exhibition that takes up five rooms. The title alludes to the powerful energy collaborations generate, and how the results are considerably more than the sum of the parts.

Although the emphasis is aural this presentation is highly visual too. In fact a deaf person could still get a great deal from visiting it. Imposing speaker cabinets, baffles, computors, microphones and consoles of analog and digital mixing and amplification equipment (including valve amps) serve as effective freestanding sculpture, as do painted lines, computer cut graphics and moving videos distinctive wall-based imagery. As you move around the interconnected spaces the sonic textures shift and swirl about - according to what loop is playing in the localised zone you are looking at, what is adjacent next door, and what happens to be programmed close to the spot where you are standing. The different durations mean each combination will never repeat in synch again.

What is remarkable is how all these very different individual talents come together to make an apparently seamless whole. Because Hansen also performs as Vj Rex, a blender of moving video images as well as sound, he is an energetic and persuasive orchestrator of different sensibilities. The result is a dynamically rich multi-layered show that effortlessly references dance parties, video arcades, noise concerts, urban landscapes, advertising, social networks, nite clubs and mass media - all without losing a strong sense of cohesion and bodily immersion.

Kicking off at the entrance with a global sensibility, Jenny Gillam’s metallic blue alarm clocks feature toy birds that at the set times twitter and move, their chirping wake up calls timed for thirteen cities in the northern hemisphere. They (and Dr Kron’s computer-cut logos of skulls, blowflies, naked figures, and various Aids prevention motifs) are positioned on a continuous yellow ochre horizon line (painted by Simon Morris) that loses 80 mm from its thickness every time it enters a new doorway.

In some spaces the sound is piercingly loud, gratingly metallic and monotonously industrial, and so it takes real determination for example to check out the beautiful geometric speaker sculptures made by Peter Trevelyan, and to appreciate his inventiveness. In the space where Hansen has collaborated with Dan Shaw (making recordings together and the speaker boxes used) and Jenny Gillam (inverted videos of their Jack Russell, Frank, superimposed over a Melbourne gallery space), the loops vary (listen here) but are less evocative than the Andy Thomson collaboration, that being a denser, more claustrophobic version of the work Hansen and Thomson presented of treated field recordings in Dunedin last year.

In the largest gallery, Hansen’s project with Mike Heynes (whose video incorporates a mechanical Godzilla toy with a Samurai movie) allows Te Tuhi audiences to experiment with music and sound effects using a synthesiser that looks like a video arcade machine with its rows of coloured buttons. With its additional array of sliders and plug in leads, visitors can test out qualities of pitch, timbre and rhythm, changing loop delays and emphasises of layering - working intuitively or applying a system. Normally the sounds found in the space seem to end up being a hybrid of underwater sonic echoes and the Dr. Who theme, but for gallery goers with patience this room is an opportunity for a lot of fun.

Hansen’s project fits beautifully with the Tahi Moore show that is located in a more central part of the Te Tuhi building and more visually oriented. Both celebrate the thin textured surfaces of plywood - on angular forms that exploit rudimentary geometry - and the directional properties of sound that freely mixes with uncontrollable ambient noise. RootMeanSquare is initially cacophonous but your ears adjust as you move around and enter various discrete spaces. Te Tuhi, with shows like this, is clearly the major provider of contemporary art in Auckland. A venue that can’t be ignored.

While I have considerable respect for Artspace and what Caterina Riva is doing with it (like generating more writing for ...

"Te Tuhi, with shows like this, is clearly the major provider of contemporary art in Auckland." Its clearly also as ...

While I have considerable respect for Artspace and what Caterina Riva is doing with it (like generating more writing for each exhibition etc., encouraging transparency & getting the intern to do more shows), Te Tuhi has an edge by really keeping its public guessing - not only through a varied programme, but by shifting walls around, changing the spaces - and pushing public presentations like the Reeves Road billboards.