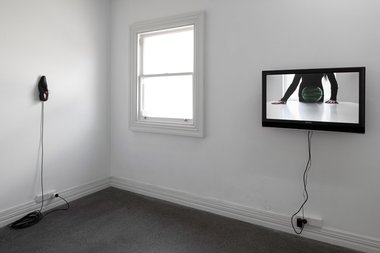 The new exhibition is less dominated by moving image: it also includes wall sculpture and drawings. And there is a constructed metaphorical dimension - often about the stresses of moving west - that was not detectable in the earlier videos.

Mariana Vassileva is a Bulgarian artist living in Berlin who had an exhibition of video at Starkwhite two and a half years ago. The new exhibition is less dominated by moving image: it also includes wall sculpture and drawings. And there is a metaphorical dimension - often about the stresses of moving west from one culture into another - that was not detectable in the earlier videos. Its use of signs or codes (such as frenetic traffic policeman gestures) was more comical than poignant.

While the private psychological content is clearly an energising and motivating factor for the artist, the resulting art works best left open so it is not specific or limited in its interpretation.

For example the key work, which takes up an entire wall, shows two nails - one rusty iron, the other golden - hammered into the gallery side by side. Underneath is pencilled in cursive script: Will they be friends one day? ‘They’ could be one person in a state of internal conflict or transition. ‘They’ could also be enemies whose hostility might evolve into affection over time. On a general philosophical level ‘they’ might also simply represent binary opposites where any such distinctions could collapse.

Another sculpture shows a single, stylish, black, chisel-toed shoe, suspended from a hook with a frosted bulb in its toe and a mirror lining its inner sole. What might it mean? Perhaps the old joke about peeping Toms putting mirrors on their shoes so they can look under women’s dresses? Or the fact that empty shoes are often smelly but looking up into them doesn’t help you find the reasons why?

There is something teasing about this work, a taunting play upon voyeurism, a vague dare that in a Duchampian sense alludes to women’s sexual organs, but not in as overt a fashion as say with Sarah Lucas. It’s more enigmatic.

one item, a very clever four and a half minute video, positions various short sequences shot in Berlin around a series of about eighteen one-liner texts - deliberately wonky (but layered) aphorisms. The meaning of each sentence applies to what you have just seen or are about to.

Sometimes out on the street or on an escalator in a mall we see in the distance the back view of a scarecrow-like woman holding a melon under each arm. A text says ‘never carry two melons under one arm.’ Another says ‘all good things come in threes’ just before we see a (spread apart) sequence of three differently sized dogs chasing each other in a park. A third states ‘Clothes make it a man’ - a misheard version of ‘Clothes maketh the man’ - and shows a woollen balaclava being pulled over a melon on a table, as if it were a head.

There is also an unusual sculpture of four walking sticks of different lengths, with curved handles, clustered together in a group and painted gold. They seem to refer to old age but as a family, whilst the melons (upstairs there is one mounted as a globe) appear to represent youth and children.

Vassileva has presented a fascinatingly whimsical exhibition, quite moving in its references to fundamental stages of human life - but also particular to her own personal cultural history. An evocative blend of public and private symbolism, this enjoyably tight mix of video, sculpture and drawing lingers in the mind.