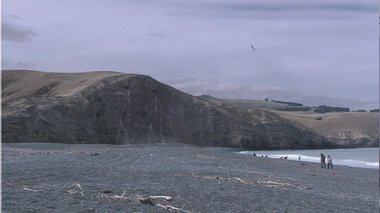 This landscape video is enjoyable because of its gently languid pace and furtive shifts that catch you unawares. It has got a Wordsworthian pantheism similar to the famous passage in 'The Prelude' that credits a cliff with a humanlike personality when it seems to rear up and loom menacingly over the poet.

Birdling’s Flat is one of those desolate spots on the south side of Banks Peninsula - jammed between Lake Ellesmere, Little River and the Pacific Ocean. It’s a stony place where people go to do surfcasting, collect polishible gemstones, or (as in my case as a teenager who was an aspiring herpetologist) look at the abundant geckos and skinks living under the matted and thorny matakoura. This windswept wilderness is the setting of a video made by Cat Auburn in 2010 when she was living in Christchurch as an Olivia Spencer Bower emerging artist in residence.

Auburn is known for her fairytale-ish, symbolic sculpture - like horses lying on four poster bedsteads - but I think she is much better and more subtle as a video artist; if this work is anything to go by. She has made a short film that is an understated expression of grief for the destruction in the Christchurch region from the earthquakes.

The photographic images I have here are not quite accurate - and seem made before post-production work was completed - for in the final version, in the centre of the cliffy vista, we see the very faint circular contour of an iris. We sense we are gazing at a barely detectable huge eye watching us.

The video at Viewfinder is of about 5 - 6 minutes long. Ostensibly it’s about people meandering across the stony beach towards the sea, and back again. The accompanying soundtrack seems to be of the wind blowing across the rocky ground, an unrelenting grinding or crunching drone, like car tyres on gravel. About a third of the way through however, two small caves near the top of the distant cliff-face (they could be two eyes in a craggy face, seen inside the bigger iris) start releasing rivulets of water that cascade steadily downwards to splash in a small estuary below. These forked vertical streams referred to in the title stop running just before the video finishes.

Thus the land weeps, perhaps in pain from its own geological splitting nearby, perhaps in empathy with the traumatised human life dwelling on its surface, and on behalf of the artist.

In the promotional blurb from The Film Archive Auburn also provides a lengthy quotation from Gabriel Garcia Marquez’s One Hundred Years Of Solitude, describing the long winding trajectory of a trickle of blood pouring from a dead man’s ear, and hinting that the waterfalls are of the fatally wounded land bleeding, not crying. Perhaps that interpretation was in Auburn’s mind before the iris and title were added.

Whatever the case, this landscape video is enjoyable because of its gently languid pace and furtive shifts that catch you unawares. It has got a Wordsworthian pantheism related to the famous passage in The Prelude that credits a peak on the skyline with a humanlike personality when it seems to rear up and loom menacingly over the poet - who has stolen a boat. It’s unusual for a contemporary video to mix mysticism with the nagging apprehension and fear that invariably accompanies natural disasters.