Responding to the Urewera Raids 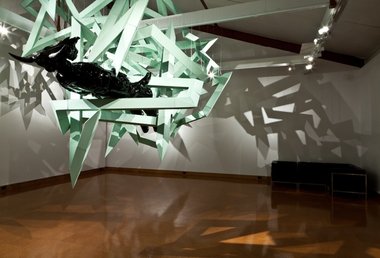 This work appears to have a strong base in Tuhoe stories, but part of its success is its ability like more traditional Maori patternmaking to open out in abstraction from a strong kernel to the universal. The title comes from a beautiful Tuhoe battle whakatauki (proverb): ‘He iti na Tuhoe, e kata te po'. One interpretation is, ‘No matter how small Tuhoe are, their laughter will be heard through the night'.

There has been a lack of response in public art galleries to the Urewera Raids of 2007. This, in a decade that began with the Parihaka exhibition in Wellington and Dunedin, which saw a wide range of contemporary work commissioned.

The commissioning this year of a collaborative work from Hemi Macgregor, Saffronn Te Ratana and Ngataiharuru Taepa by Te Manawa, the Manawatu’s public museum and gallery ends that silence. The fact that it has, as far as I can tell, received scant media attention itself (I heard about the installation by word of mouth late in its run) has only underlined the lack of full discussion in the mainstream media of the fallout from the raids.

Ka kata te po is an altogether darker and more dazzling affair, lights and materials sharpened to dramatically express contrast between the light of the heavens and the blackness of the night beyond.

The collaborative relationship itself is distinctive. Over time these three artists have developed a working process to the point where it’s no longer a case of identifying what is each artist’s respective part of the work (so often the case with collaborations, and more evident in Tu Te Manu). This is comparable to the installations of Ralph Hotere and Bill Culbert. The shared bold use of materials and light to express natural and mythological worlds and create space for reflection around vital current issues also makes such comparison inevitable.

Like Tu Te Manu this work appears to have a strong base in Tuhoe stories, but part of its success is its ability like more traditional Maori patternmaking to open out in abstraction from a strong kernel to the universal. The exhibition title comes from a beautiful Tuhoe battle whakatauki (proverb): ‘He iti na Tuhoe, e kata te po’. One interpretation I’ve read is, ‘No matter how small Tuhoe are, their laughter will be heard through the night’. More specific here however seems the translation that ‘a single few can raise the spirits of those in the underworld’. Ka kata te po can be translated as ‘Hades shall laugh’.

The exhibition blurb states that it explores expressions of tribal mana motuhake (authority), examining “the suppression and restriction of this power by the exercise of colonial authority.” Yet there is nothing polemic about the visual delivery, even when cradled at the work’s centre is what appears to be the figure of a dead soldier or police officer.

The work cuts through the black cloak of power with a lightning-like call for strength. With impressive verve it mixes aerially the abstract and figurative to visually pierce through the smokescreen of words that have obscured the violence to the people of the Urewera.

Making a diagonal cutting through the small gallery space, a floating fractal form of rods cascades down in a series of twisting, tortured angular movements from up high. Designed for the space, it passes through the room’s white lighting track so that not only does the track act as a support it feels like a work component itself.

Like Gaby O’Connor’s What Lies Beneath at City Gallery crystal forms reach to a sharp point close to the floor. And like O’Connor’s work, it is thoroughly site responsive, but its interlocking components could see it restaged elsewhere.

Gallery lighting is trained to create dramatic shadow forms across the walls of the space (providing perhaps a contemporary form of tukutuku). Projection feels like a fundamental part of the work, creating an immersive environment. I’m reminded of Joyce Campbell’s large crystal city photographs (at Te Manawa in 2006), with the searing intensity of their expression of both light and dark, and confluence of the microscopic and galactic.

The work’s geometric cluster is like the knotting together of the seven stars of Matariki (the star is also used as an emblem by Tuhoe). Matariki as Maori New Year is a time of new beginnings, of reflecting on the past and future. The installation opened at that time this year.

The points of these stars are sharp, as if a prism has shattered into a nest of deadly shards. As a sculptural form it’s fascinating for its knotted complexity, shape-shifting dramatically, like a glacier as you move around the room. It is expressive of a tangle of emotions, of chaos, and a machine of state that constantly moves its limbs into new configurations and emblems of authority.

As a continually shifting boundary fence, I read the colour green here as fertilized farmland, and the components variously as barbed wire and picket fences. A trap mechanism, this is an abstract shape that can swiftly change form and shift interpretation.

Caught in the web of the work’s limbs, as if prized from the ground by the tentacles of a colossal squid is a black gloss spray-painted life sized human figure, floating horizontal to the floor. This could be the pose so familiar from art history of the coffined dead, yet what is noticeable is the bend of the knees, suggesting the figure has been snatched from the ground and snap-frozen alive. They have been disconnected from the land.

Eerily, the figure’s head is that of a bull’s skull. Wearing combat knee-pads, boots and gloves, a pistol can be seen holstered to the figure’s side. Through Native American tradition we think of the bull’s skull as a symbol of bravery or strength, and cultures think of the bull variously as a figure of death, tyranny, ferocity and brutality. In line with the Matariki allusions of the work I also think of how in the night sky the seven sisters ride on Taurus the bull’s back.

Taking the bull’s head also as reference to Michael Parekowhai’s bulls in On First looking into Chapman’s Homer may be stretching it, but I also can’t help but compare this figure to those Parekowhai has placed on guard in galleries, based on family members. The placement of this figure almost seems to say ‘enough already with the ironic servitude’.

I’ve lived with the image of Ka kata te po burning in my head for a couple of weeks now. The art is a potent response to the disempowered, mixed up confusion and anger of our times - a feeling of being governed by forces beyond our democratic control. It is also a work of great beauty and hope. The entombed figure is for me not just of a dead soldier, but of a spirit floating up out of the dark into the light.

One final note: writing this I’m conscious, given the works roots of the absence of a Maori critical response. The paucity of Maori contemporary visual art critics is a real concern. I’d like to encourage interested parties to approach the editor.