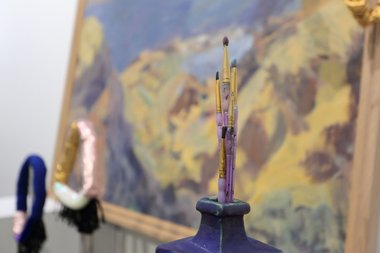 There's no such reverence shown to the work of other artists from the collection. They are skewed. Max Gimblett and Gretchen Albrecht paintings are leaned on severe inclines, difficult to view. Propped up, they are turned into the roofs of low-lying shelters, as if these might be break-out play areas at a warehouse rave.

It’s increasingly commonplace for institutions to allow artists to play with their collections. Examples I’ve seen in New Zealand in recent years: Sara Hughes’ forest of lightstands, For Kultur, at Hawkes Bay Museum and Art Gallery in 2010, Andrew McLeod’s poster works, drawing ideas from the Te Papa collection in 2013, Blaine Western’s Grammar at Dunedin Public Art Gallery in 2016, and ever rearranging-the-furniture Wayne Youle at Pataka, Porirua (Recollections until 22 January).

While variously engaging and amusing I’ve generally been underwhelmed. Western’s heady rearrangement came closest to inviting new thinking, but otherwise accomplished, inventive juxtapositions—yet a scrambling in collage that doesn’t provide any interesting new messaging or kinds of indexing. Little often appears well digested. The approaches aren’t radical. Collective meaning within collections has been gone in search of, only to find incoherence. They resemble gallery programming stopgaps.

Perhaps this is inevitable—collections are subject to the era and whims of their lineage of collectors. Making sense of that is the job of the curator, not the artist. So unless you’re going to be activist and upturn the colonial, patriarchal, neoliberal political carthorse, why do it?

The answer naturally lies in the tenor of our times: give us interactivity! Multiplicity! Assert the dynamicism of the individual! Reflect our grazing of the global database of image and information on the internet. For the museum, the artist is an avatar for the individual consumer, demanding more ways to copy and paste artefacts into the here and now. The gallery space as an exploded individual field of vision.

Which is actually why I really do like, in counter to the above examples, Nelson based artist Josephine Cachemaille’s Us, Us, Us. An honest, joyful scattered play in the abstract with The Suter Gallery’s permanent collection combined with her own work.

The title gives it away. Us, Us, Us privileges the visitor as a collective participant and owner of a collection, not a passive consumer. It’s a party, an occupation. There’s little shelter for public safety and welfare—no one is telling you which way is up. Instead smartly designed public playground apparatus is provided to hang the mind off. The spaces in between the objects are charged.

Cachemille’s installation is like being invited over for a playdate at a friend’s house to find they’ve already upturned the lounge furniture and washing to provide cubbies; scattered the family ornaments like river stones across the floor to create trails you might add your own stories to. It’s absurdism in installational action—that finding inherent meaning here will ultimately fail, and we should instead embrace both its non-sense and the unknown to make our own shelters.

With a nod to Nelson’s dance gathering past, you can imagine a collective party in play. The jostling upturned arrangement spilling across the floor, hanging at odd heights or on museum chocks and plinths on the floor. Traditional arrangements absurdly askew encouraging you in your mind to handle the works in a way staff might enjoy in the workrooms out the back.

An interview with the artist in the catalogue makes it clear she did go into the project thinking she would juice some meaning from the backrooms, but then realised that was futile. Instead she cedes to the modernist creed of subjugating the world to her own abstract vision, opening up the elements to make them alive, magical and open—like Prospero on his island. It is a lot of playful fun, poking the stick at being magician. Mixing with carnival rudeness her own painted and sculptural creations with the collection, it all becomes hers and, in doing so, ours to play with. Us, Us, Us is like a collective chant at a theatrical protest for liberation of the object.

To say Us, Us, Us resembles an encampment, is not to say it feels ad hoc. It’s disobedient, yes, testing the white cube’s spatial potential, which makes determining clear systems difficult. But like the abstract paintings and assemblages from the collection it includes as part of its construction (Gimblett, Woollaston, Driver and Albrecht), it holds together under its own mystical rules. An accomplished form of object theatre.

Strong visual design and expressive intuition appear to be in dual play. In its three-dimensional field are a galaxy of dots at different levels, directional lines and arrows moving us through the space, and rectangular blocks folding into different forms. There’s a vaguely unifying palette of hot glam oranges, reds, yellows and purples playing off colours in the paintings from the collection, set within a black and white grid (with large graphic forms reminiscent of the work of Rose Nolan and its twentieth century avant-garde precedents). Cachemille’s other more gauche colourful, bouncy additions amplify the hot colours in some of the museum objects.

Cachemille always reminds you of artists that have come before her. In recent work like this it feels like she’s owning that and in turn finding more of her own space. I am reminded of the way more seasoned New Zealand artists Eve Armstrong and Peter Robinson have dealt with visual complexity in installation, finding balance in fluidity. And then there’s the great influence of Don Driver—the magician of assemblage with found material—hanging, circling, sprouting out of vessels. There’s less darkness and menace in Cachemaille, but that’s no bad thing. Here a set of purple painted paintbrushes pokes out of a blue vase from the collection, one of many gestures celebrating the freedom of our artists in action.

The room is less in disarray as in a state of human movement in play. Everything feels in transitional motion—like an Alexander Calder mobile—as a celebration of the magic act of making, of invention. Many sculptural additions suggest eyes, arms and legs, as if the whole collection were a body.

Bodily for the viewer, it resembles a theatrical play space. As you enter through one of three entrances you pass through hanging objects and curtains in animated abstract conversation with each other in colour and form. They invite your body to insert themselves, to employ them as props and costumes.

The ‘us’ is also represented by the addition throughout of fun fabric and other sculptural elements—ridiculously elongated fingers, eyeball puffs etc. Propped up before a Woollaston landscape, two large wonky cushiony rings patchworking pink and purple fabrics, masquerading as eyes with droopy black fringes—cartoon cabaret eyelashes.

There’s the playful, absurd assertion of the human imagination that marks out animation and the comic. The handicraft and theatrical wardrobe components also assert Nelson contemporary and historical strength in citizen craft and costumery (from Wow! to its active market culture). Further Cachemaille reminds us of the strength of Nelson’s ceramics tradition, sprinkling pieces from the collection throughout, freed from plinth and pedestal, so they resemble parts of the nervous system of the public body. Nelson’s cultural history is as much the influence here as a litter of contemporary and modern art.

Reality is presented as messy, not carefully filed. A pair of cute red ceramic boots from the collection stand on the carpet at odd angles from each other, as if thrown there on arrival home from a night out. A pink lightbulb sits close, as if left there after some idle late night play. Absurdly, a bronze cat from the collection sits atop a ridiculously tall high-dive cat-scratch post like tower. Cachemaille satisfyingly works different levels and treats the volume of the space, shadows and all with a theatre designer’s respect.

The artist’s own paintings are propped up. They express the installation’s overall plan in the abstract: masses of blocky brushstrokes push in different directions, with arrows shooting off irregularly, like starbursts. If there’s reverence here it’s granted to museum chocks, blocks and pedestals and other supporting devices. Miniature Stonehenge standing-stone like, they provide measuring instruments by which we might with wit find our own connection with the cosmos.

There’s no such reverence shown to the work of other artists from the collection. They are skewed. Max Gimblett and Gretchen Albrecht paintings are leaned on severe inclines, difficult to view. Propped up, they are turned into the roofs of low-lying shelters, as if these might be break-out play areas at a warehouse rave. Provisional lean-tos, they could be a commentary on our haphazard treatment on New Zealand’s treatment of its built heritage, or the way art becomes digitally copy and pasted wallpaper. The Albrecht is on long aluminium legs as if it might eventually be raised as an advertising billboard on the side of a motorway - future signage.

One imagines this refusal of these objects meaning and accumulated value might seriously disturb many. I certainly struggled with it initially. A framed portrait by Woollaston of John Foster has orange masking tape latticed across its glass front, as if it’s in transit, completely denying its viewing, yet assisting its role in the installation in the abstract through colour and shape (delightfully I find out belatedly when I ask what the work is that this was in fact how the artist found the work in the storeroom from transporting - it’s treatment has informed the installation, not the other way round).

Woollaston’s own paint-encrusted painting palette, an object from the collection, has been framed, placed in a aluminium structure and raised well above head height. The palette is denied its story and instead asserted as a painting, yet then playfully exalted at a distance from us on high. It plays with our heroes’ props being put out of reach in museums as holy relics.

Cachemille presents directional arrows throughout the gallery as part of the work, but they point us into space, encouraging us to shift around the sprawling objects as if we were rock-pooling, free to explore. Long waggling tails and fingers are everywhere, no longer telling us off but instead inviting us to step where we wish. A work of curly kinks rather than bodies of meaning.

Pedestals and clothes-hangers, enlarged clunky chains and snaking cords, the room is full of devices to frame empty spaces in the room and provide shadow-play on the walls to make you an active space negotiator.

Meanwhile it’s daringly unclear what you can and can’t touch. There’s a delightful amount of trust. Goodness knows if the Suter has come out of it without some collection damage. 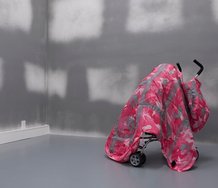