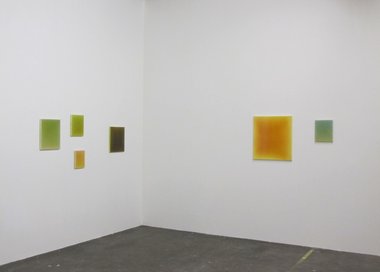 The ink and shellac fields on Fabriano paper are granular with tiny bubbly specks while the resined canvas surfaces are mainly gaseous in appearance with faint floating veils. And the shellac-based ink surface has a slight relief to the poured shapes, unlike the evenly coated resin of the canvases.

This display by Leigh Martin of colour-field works emphasises cool lemons and limes and not the hot raspberry reds of his last show. So it’s a different mood; a less intense viscerality. Like Dale Frank he uses glossy resin but his sensibility is closer to the monochromatic abstractions of Joseph Marioni, working with hazes not stains, and delicately nuanced in its colour organisation.

Martin’s nine framed works on paper do not have the viscous glossy surface of his resin-covered canvases, nor of course the hardened drips and traces of chromatic undercoats characteristically detectable on his stretcher sides, but they do have Olitski-like streaks along their Fabriano edges and bottom corners - and as such, more tonal contrast. And the shellac-based ink surface has a slight relief to the poured shapes, unlike the evenly coated resin of the canvases.

Indeed those ten canvases, especially the bigger ones, draw you in towards their internal spaces in a way that the more textured paper works don’t, although the latter are not working studies (made as preparation) but a slightly different sort of optical experience. Their more evenly saturated, warmer and brittler hues are more directly anchored to the support, the sellac-based ink fields being granular with tiny bubbly specks. The resined canvas surfaces on the other hand are mainly gaseous in appearance with faint floating veils. (Although a few small ones are reminiscent of the paper works, containing teeny-weeny flecks, like scattered splinters or dispersed shaven whiskers.)

Most of the resin works are pale with a tunnel like space where the hollow middle contrasts with the outer edges. However the best don’t do that. Instead they have a horizontal or vertical movement at their edges where stacked barlike dark pools deceptively imply wrinkled paper. Mysterious and rhythmic as if made with poured washes of brown honey or deep green chartreuse, at least two have real presence - a surprising pulsing musicality that slowly becomes apparent in the sticky smoky murk.