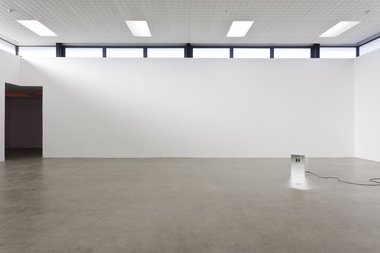 It is likely New Zealander Billy Apple was the first artist to ever work with an olfactory expert in this manner when in 1969 he commissioned Suzanna de Maria to make an apple fragrance for his show Aromatic Coloured Space, held at his Apple gallery in New York, and later repeated in Christchurch's High Street Project in 2006.

This is the third and final display in the Radiant Matter series of exhibitions Auckland artist Mitchell is presenting in this country before he heads back to Berlin to complete a residency there. It continues his prolonged exploration of nonvisible or near invisible subject matter (such as dust, humidity, scent), crossing sometimes into the sociological (magical spells, artistic notoriety), following a tradition set up by certain anti-visual (‘anti-materialist’) conceptualists in the sixties with their use of gas, radio emissions and fired slug-gun pellets.

Radiant Matter 111 is in three parts, each section exploring a physical manifestation of the same specially commissioned scent of a room - different molecular variations in gaseous, solid and liquid form in three separate spaces.

The dominant room in ARTSPACE, the large square gallery, is used for The Smell of an Empty Space (Vaporiser) where the scent (originally in a concentrate) is released intermittently into the air through an atomiser. This is hidden in a rectangular box covered in mirror glass veneer so that its shape partially dissolves optically in the room. The aroma to me smells sweet and sanitised (as if drycleaned) and (to its credit) not immediately perfumy at all. It was made for Mitchell by the highly regarded French perfumer Michel Roudnitska, and one of its ingredients alludes to ozone, an effective killer of bacteria - and so emptier of microbe infested spaces.

There have been a number of collaborations like this over the years between olfactory researchers and visual artists. Scottish artist Clara Ursitti specialises in scent art and has worked closely with scientist George Dodd, as has Colombian Oswaldo Macia with Ricardo Moya. It is likely New Zealander Billy Apple was the first artist to ever work with an olfactory expert in this manner when in 1969 he commissioned Suzanna de Maria to make an apple fragrance for his show Aromatic Coloured Space, held at his Apple gallery in New York, and later repeated in Christchurch’s High Street Project in 2006. (In 1921 Duchamp and Man Ray changed the label of a bottle of perfume in Duchamp’s Belle Haleine: Eau de Voilette [Beautiful Breath: Veil Water] but the appropriated bottle of Rigaud’s fragrance Un Air Embaumé did not have a specially commissioned aroma nor was it ever opened.)

For a solid version of Mitchell’s scent (The Smell of an Empty Space Perfume Plume [Solid]) he has sprayed it onto the centres of sheets of photographic paper which he has glazed and framed and hung in a long row. The room’s lighting has been fitted with filters blocking out the green and blue spectrums that affect the paper, leaving the space with a red glow, as if in a darkroom. The paper nearest the entrance with its reflected natural light is the most prone to change, that most distant not so. The changing paper is likely to affect the circular coating of perfume, dissolving and releasing it at its edges - but keeping it trapped behind the glass.

The third molecular variation (The Smell of an Empty Space [Liquid]) involves a low table made of a large rectangular mirror held up off the floor by G-clamps. On this are placed a number of sealed glass pipettes and in their spherical middles lies diluted liquid perfume which of course we can’t smell. This clear liquid happens to vibrate (in little ripples) with the passing of nearby K’ Rd traffic. The beautiful mirrored table - itself like a pool of mercury but stable - makes the fragile pipettes appear to float like delicate spidery boats, and is the highlight of the show. Its silver surface draws attention to the geometric relief patterns on the ceiling and the brittle nature of the partially invisible vials.

My view is that this is not as successful a show as Radiant Matter 1 (though I haven’t seen RM2, and it might be better than that). The sculpture and installation was tighter in New Plymouth, the formal and material properties more interconnected, with the leaning plaster bubble wrap casts fascinating as objects. Admittedly ARTSPACE is a hard collection of rooms to work with: the three spaces are so varied - almost opposite extremes as floor areas. Mitchell has focused on the idea of molecular permutations of substance and tripped a little on the ‘solid’ one which is a little too close to liquid, even as a coating degrading with the effects of peripheral light. Fascinating all round.