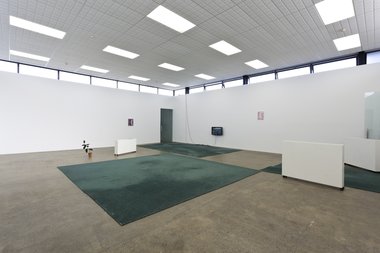 Interestingly, the publication Mitch has made with this show explores the theme of chess in depth, and in its lead-up discusses Jan Verwoet's oft discussed attack on the strategic in conceptual art, where the approach of having transparent intentions is dismissed as being stifling. To Verwoet (and to Mitch too obviously), an art of secrets is a preferable alternative.

The title of this show refers to a legally registered company where five artists (at the suggestion of the curator) make collective decisions about the presentation of exhibits, perhaps altering their content and placement over the exhibition’s duration. In fact the artists, explicitly named on the mail out poster and gallery door, need not be identified for they serve as anonymous working components, though the conventions of art viewing being what they are, their work is easily historicised. There is no genuine mystery around the sources or production of the display, though with no labels, it is viewer hostile maybe to out-of-towners and some locals. This registering procedure is part of Roman Mitch the curator’s desire to make an entity longer than the duration of the exhibition itself

Caraway Downs’ main physical focus is the big space of the square ARTSPACE gallery, though like the issue of declaration of artists’ names, it is half-hearted. Of the two outer galleries, one is roped off with a piece of draped string that beckons you to duck underneath and investigate the leaning piece of cardboard down the far end, and the other has a piece of hardboard hammered high up over the darkened doorway making it easy to enter. Inside is a video of the curator trying to reassure the artists that there is no need for alarm.

Should they be freaking? Can there be a coherent ongoing communal entity - such as here, with a videomaker, painter, two sculptors, and a drawer on walls - that also doesn’t undermine the individual value of those contributions?

One of the sculptors uses large square sections of green carpet (of different sizes) and these seem to vaguely allude to a giant chessboard. All of the artists provide items which, though separated, have interlocking or potentially overlaid parts - such as pot plants alongside (but not in) plantholders, identically drawn graphite configurations on separate walls, paintings that reference each other so they might be parts of one painting, a video that shows a storage space where the floor is gridded up and boxes arranged in stacks.

Interestingly, the publication Mitch has made with this show explores the theme of chess in depth, and in its lead-up discusses Jan Verwoet’s oft discussed attack on the strategic in conceptual art, where the approach of having transparent intentions is dismissed as being stifling and too much a genius or hero-like position. To Verwoet (and to Mitch too obviously), an art of secrets is a preferable alternative.

Personally I think that there is no need for such an either/or scenario, for the best conceptual art works like those of Weiner, de Maria and LeWitt, are both transparent (as idea) and mysterious. For Mitch though, the Caraway Downs company is meant to be a kind of obscuring screen.

Whatever one’s attitude to the totality, as details the small canvas paintings seem to be particularly successful with their layered referencing to musical instruments, lines of string, Greek columns and cigarette butts, as is the video with its examination of the inculcation of desire - blending fashion magazines (sex and power) and Cornwall Park (nature as freedom) with a Jason Statham movie (risky adventure).

The twelve, almost indecipherable, graphite drawings use a gallery corner as a kind of fulcrum, providing a light immateriality that counteracts the heftier planar impact of the islands of green carpet, while the three cream planters, small low slablike walls filled with black or white gravel, make peculiar obstacles that impede your progress across the space. Access into the side galleries in comparison is through a beautifully proportioned plain curtain that billows every time the door to the outside foyer and stairwell is opened.

A low key show with its motivation hidden within its under elucidated publication, this exhibition is really more about the curator than the artists. I think curators should be invisible and not act as artists themselves, but having said that, Mitch’s chosen artists’ difficult (and I think naive) display and his small book are well worth investigating. Whilst it has no overseas stars (there were many in Robyn Pickens’ show of last year) two of the exhibitors here are comparatively unknown, and shouldn’t be.

It has been made quite clear—in our own conversations; in previous writing around the Obstructions (Window) show; and in the ...

It has been made quite clear—in our own conversations; in previous writing around the Obstructions (Window) show; and in the way that our information around the show gives itself freely in casual conversations, in personal connections, and develops in rumours—that it's secrecy at the service of delay, and not for it's own sake. Secrecy at the service of delay specifically because delay might detach production and reception and give the work a little room to breathe.

The attachment of production and reception is inseparable from the utopia of 'the democracy of the marketplace', namely those with the upper-hand in a given market. That was my wager, at least. And interestingly the only people who have complained about how our secrecy has worked, are insiders with a large stake in the local market.