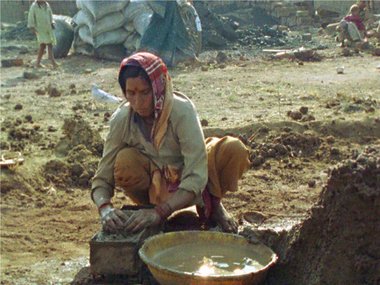 Pickens' show examines in a very specific manner the current global situation of employment in an ultra late capitalist era, when many production sites are closing down. The production line manufacturing system is being replaced by a post-industrial knowledge economy - as symbolised by a computer keyboard and what is termed ‘immaterial labour', linked to a new variety of ‘less tangible' products such as ideas, information, style and of course art.

Robyn Pickens, the 2009 curatorial intern working in the staff office at ARTSPACE, here presents an exhibition that is the result of her major research and travel project, something that each ARTSPACE intern does every year. Her show examines in a very specific manner the current global situation of employment in an ultra late capitalist era when many production sites and factories are closing down. The supervised production line manufacturing system is being replaced by a post industrial knowledge economy - as symbolised by a computer keyboard and what is termed ‘immaterial labour’, linked to a new variety of ‘less tangible’ products such as ideas, information, style, fashion, culture and of course art.

The title post-Office is a multi-layered pun as the venue for the show is on a site where there was a post-office in the nineteen-seventies. So ARTSPACE, as ‘after the factory’, is itself an example of what Pickens is talking about. It’s an office space which became a gallery, just as for example, while I was in France in the nineties I noticed several abandoned mediaeval chapels becoming galleries. A related phenomenon of recycling - except she is talking about factories.

The most visually spectacular work in an exhibition which has several texts is Harun Farocki’s hour long film In Comparison, about the changing methods of brick production and how these products are utilised in domestic and industrial architecture. Rich in hot colour, inventive camera angles, and very informative, it shows a vast range of manufacturing styles and methods of labour from around the world, especially India, France, Germany and Africa. Educational, sensual and thematically focussed its sequence of locations demonstrates changing technologies, including one where making the walls of a building and firing a kiln full of bricks is simultaneously the same thing.

Liam Gillick’s three stacks of free booklets presents a publication that juxtaposes details from mediaeval woodcuts of labour and leisure with a transcription of a speech Why Work? he gave in New York. It is about a new type of activist artist Gillick wants to advocate, and discussion obviously plays a pivotal role in Pickens’ thinking too. His email version of the same text has pictures of factories and is more effective I think than the book’s here. Actually I think Gillick’s earlier paper Maybe it would be better if we worked in groups of three, particularly The Experimental Factory - its second half, found on e-flux - is much more lucid. From that essay, here he is comparing a car factory with a collective of artists:

In the Volvo factory you can see trees while you are making the cars. But you are still making cars, never taking a walk in the woods. Where are the models for contemporary art production in the recent past? … The idea of collective action and the idea of being able to determine the speed with which you produce a car, whether you produce it in a group or individually, at night, or very slowly, seems close to the question of how to make art over the last fifty years.

Gillick’s somewhat dry little book at ARTSPACE is the motor I suspect that drives Pickens’ show. In it he talks about leisure:

The existence of a leisure promise is not synchronized with artistic production. Modes of leisure have been adopted by artists to openly counter notions of labour as sites of dignity and innovation and in order to critique, mock or parody the notion of an artistic life as a role-play within the leisure zone.

Puerto Rican director Beatriz Santiago Muñoz’s film Fabrica Inutil (Useless Factory) 2002 also raises questions about leisure and labour, but though deliberately unrealistic and flippant, it doesn’t seem to be satirical. It uses non-actors in a loosely scripted fiction, examining employed work (in a packaging plant) to see if it has real value, by postulating its end and showing in contrast recreational pursuits like the workers dancing and watching the sun rise.

Kate Newby‘s contribution to this show is a photograph of an Auckland clothing factory on the exhibition’s invite/poster. It shows her consistent interest in clothing manufacture and photographs that exploit a certain kind of raised vista - as demonstrated by the One Day Sculpture work she made with Nick Austin in Western Park and some of her Gambia Castle exhibitions. There is a suggestion that the 85 year old factory, Parisian Neckwear, she photographed with its adjacent Myers Park, is going through changes.

The repetition, monotony and stress of a Fordist factory regime is alluded to in Tehching Hsieh‘s documented year long performance of punching a time clock for each hour within a complete (sleep-deprived) year: 1981. Roman Mitch on the other hand contributes ‘paintings’ made from folded paper kept in his jean’s back pocket that absorbed denim dye stains during his time spend working in the ARTSPACE ‘post-Office’ as an art technician. They become an unprepossessing visual record of his time spent at work, and because they are not made in leisure time, seem to echo the sentiments of a theoretician /artist like Gillick. (Here he is once more: It is quite appropriate for artists to co-opt working models and turn them to their own ends - from the factory to the bar or … artist’s studio …that either ape or mimic established daily structures or deliberately avoid and deny them.)

Fiona Jack’s contribution is a reproduction of a photograph taken in New Plymouth in 1893 apparently on the first day of women voting in New Zealand. For post-Office that image is enlarged on a wall and also presented on a sheet backed by a conversation between Jack, Pickens and five other women who work in Auckland’s art sector. Whilst the chat about suffrage is very readable only Pickens herself introduces the specific subjects of work, leisure and global trends, and these areas are not expanded in any depth. I imagine Kate Newby’s clothing factory project has direct relevance, so it is a shame she wasn’t included.

Oussama Mohammad’s film Step By Step 1979 deals with life in a Syrian village and how the lack of employment opportunities for young men encourages them to join the armed forces or move to the cities to seek labouring jobs. The main character initially wants to become an engineer but he gets fed up by the pressure at home and at school to constantly study so he abandons it to work in the fields and olive orchards. The film (again with documentary and acting) examines the harshness of life under the secular Ba’ath regime, its grim mood accentuated by the stark imagery of the black and white photography and the haunting vocal and oud music accompanying it.

This film and that of Harun Farocki are really interesting, but they are sensual too. One is pleasurable with its lively colourful variations on a technological theme, and the other, though disturbing with its frank portrayal of a hard and monotonous existence, is also strangely haunting and oddly beautiful. They, and the absorbing Jack work (an oddly out of place digression), are the highlights of a wittily self-reflexive, complex, multi-levelled and thoughtful show.