Immersing the Body in Art and Architecture 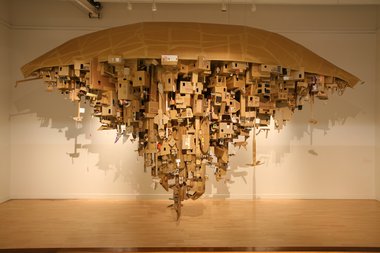 When analysed, 'Stealing the Senses' is stylistically a jumbled and conceptually incoherent assortment. There is little consistent over-arching logic to the selection, apart perhaps from the use of various architectural nooks and crannies that are normally rarely used. Some exhibits are immersive, but just as many others have the viewer's body outside the artwork, not within.

Stealing the Senses
Curated by Rhana Devenport and Meredith Robertshawe

This cluster of twelve mini-shows and performances put together by Govett Director Rhana Devenport and Curatorial Assistant Meredith Robertshawe deals with the pleasure of sensory perception (sight, taste, smell, sound) tied in with particular sites within and around (or on top) the Govett-Brewster building. It is an international mix of installation - much of it site specific and immersive - blended with sculpture (some from the Collection), documentation in the form of videos, and sound.

When analysed, Stealing the Senses is stylistically a jumbled and conceptually incoherent assortment. There is little consistent over-arching logic to the selection, apart perhaps from the use of various architectural nooks and crannies that are normally rarely used. Some exhibits are immersive, like those by Sara Hughes, Brook Andrew, Anton Parsons, Jon McCormack, and Sonia Leber and David Chesworth, but just as many others have the viewer’s body outside the artwork, not within: contemplating a freestanding object or recorded event in isolation. Some emphasise the senses, others almost repudiate them.

Yet while the focus and quality here is uneven there is also some remarkable work that - irrespective of it fitting into any theme - makes a visit to New Plymouth worthwhile. The most obvious example is Philippine artists Alfredo and Isabel Aquilizan’s huge inverted cardboard boat, made of packaging used for transporting products long distances. Referencing Austronesian migration, this massive suspended craft - it looks like a city of buildings on a cliff face - has its own attendant life-boats, each with their own individual names written on by the school groups who helped in the work’s construction.

The spectacular scale of this sculpture, its complex detail (folded chimneys, cut out windows and doors) and bursts of subtle colour from chunks of tape and stuck-on wrappers, makes it not only particularly evocative but also a perfect fit into Gallery Six with its exceptionally high stud.

Of the installations Leber and Chesworth’s use of the narrow fire exit staircase is particularly striking. Normally this part of the gallery is closed off - to be used only in an emergency - but Billy Apple and Wendy Bornholdt did exhibit there in the eighties and nineties. This current display capitalises on the enormous height above the descending carpeted steps, with unsettling dreamlike images projected on to the top and bottom end walls, and haunting choral music that makes brilliant use of the cathedral-like ambience.

It is a great sound installation, the exhibition’s highlight, one combining devotional mysticism from above with earthier, body generated grunts, moans and squeals (apparently from genuine surprise, pleasure and pain) from below.

Another exemplary contribution is Francis Upritchard, Martino Gamper and friends’ craft presentation at the top of the main stairs. On a carpet-less area with raw concrete floor and delicate pink walls, stands, tables, rugs, ceramics, bronzes, glass, jewellery and chairs show off themselves (often altered found objects) and Upritchard’s impeccably positioned, colour co-ordinated sculpture. Most of it was made during Upritchard’s residency in New Plymouth, the exhibit emphasising the value of collaboration.

Martino Gamper’s furniture and Karl Fritsch’s jewellery particularly impress with their unpredictable combinations of materials, unusual arrangements and new hybridities. Gamper’s extraordinary chairs, with their witty conversion and incorporation of other chairs, have such an effortless fluidity they look ‘natural’ - their design seems inevitable. You see them as beautiful sculpture while Fritsch‘s rings are more organic. They are really tiny abstract sculptures that focus on clumps or types of stacking (as mineral heaps), assembled to decorate the body.

The two part installation by Tiffany Singh has a ‘tree’ of votive shrines hanging from the ceiling - coloured wax Hindu, Buddhist and Catholic effigies - suspended over a bed of salt. This is on one side of Gallery Five, and rows of offerings (aromatic spices, petals, beans and pigment) laid out in leaf boats floating upon a sea of rice on the floor are on the other. Next week the artist will supervise a performance when members of the public can take the offerings and place them with the deities or personalities of their choice.

John Ward Knox is well known for his understated, carefully lit wall carvings, made out of cut-into plaster on the gallery wall that is then sanded, or perhaps painted. He is also known for his biro on paper drawings, and three-dimensional ‘drawings’ using fine chains suspended across corners, casting shadows, or curved projecting wire.

In this exhibition he contributes a linear configuration made from twisted copper cable wire that is thick like a cord. It ascends from the floor and near the roof the rippled strands unravel and go in seven different directions to become attached to points in the ceiling. A glittering three-dimensional ‘drawing’, it looks most interesting in the early morning light when its simple dandelion-like form becomes complex, being reflected and distorted in the thick glass sheets hanging off the wooden banisters on the nearby ramps.

Most of the other exhibits are disappointing. Brook Andrew’s giant inflatable bouncy room, lined with zigzagging op-art patterns, looks worn and tatty. Sara Hughes’ brightly coloured painting installation in the café, using bar graphs and pie charts on the walls, windows, floor and ceiling - and influenced I think by Louisa Bufardeci - is at least impeccably presented. It examines the global and Taranaki production of wheat (you can reference the details from her accompanying catalogue), causing the viewer to possibly suffer from retinal vertigo and informational overload. Likewise Jon McCormack’s blue-lit installation of pulsing cells and morphing peanut forms, moving up and down or across a vertical/horizontal grid, doesn’t entice you to linger long. With the dreamy electronic music and nightclub fog clinging to the flickering translucent screens, it seems too obvious and trite and - like the Brook Andrew work - lacking mystery.

Two performances where artists collaborated with local tangata whenua (te hapū o rongo, Parihaka) had more potential - not necessarily because of that fact but because the ideas were more unusual. Jennifer Wen Ma’s project of videoing a moving image of Māui (pulling the sun back from the night) projected onto smoke on top of the Govett-Brewster rooftop at dusk, is a clever proposal - though not expressed dramatically through any particular sense. And even though the wind direction on the day didn’t cooperate with the smoke machines, her image of Māui, with its stylistic Chinese mannerisms, straining on his rope in the night sky, holds your attention.

Thai artist Pinaree Sanpitak’s performance was more process than completed product: the preparation of bread and other food for the opening using breast-shaped moulds that look also like stupas, Buddhist monuments containing relics. The baked bread involved a 90 year old bread starter from Parihaka, and so the moulds and audio / textual documentation of the attendant karakia were later presented in the streetfront gallery window. The fact that the food could only be tasted by those who attended the exhibition opening limits the sensual accessibility of this project.

Two other works included come from the Govett-Brewster Collection. Both are superb but they have been seen several times already. Anton Parson’s rectangular doorway of thick red transparent plastic strips, not only has astounding saturated colour that you walk through as if a sliced up synthetic Barnett Newman, but is tactile and smooth when it touches your skin - the perfect fetish object - and a curious contrast to the austerely linear minimalist work by John Ward Knox nearby.

Billyput, an in situ Callum Morton sculpture, has a locked green door in the side of the Billy Apple staircase acquired by the gallery in 1979. The chattering and giggling sounds emitting from behind it suggest (with the door colour) a family of leprechauns, and are also a point of comparison for the hidden makers of bodily sounds at the bottom of the Leber and Chesworth installation.

Despite its significant highlights, Stealing the Senses is an oddly inconsistent show. The title itself demonstrates the project’s confusion, suggesting absconding with or removal of the senses, despite the opposite meaning - reinforcing, supplementing or amplifying the senses (cranking them up) - being obviously intended. Title and exhibition then, both ambiguous, both muddled. 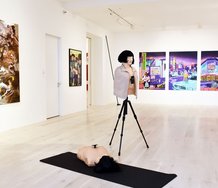