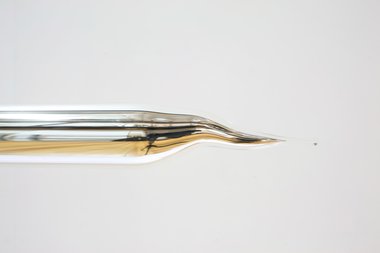 I suspect this is the best show of Mitchell's career so far. It is particularly cohesive conceptually, with its methodical ruminations on art viewing processes, 'radiant' but invisible matter and how we might detect it, and the authoritative power of language.

Like the subject of this website, art, the content of Dane Mitchell exhibitions in recent years has become increasingly hard to define. Just as art itself now often seems to have little to do with visual qualities but is entirely to do with social encounter, so Mitchell offers his audiences contained spaces bearing something that is barely visible, maybe never seen, or perhaps just detectable through smell. The presentation around it - the framing, the enclosure - however is all important, and the invisible art inside, inevitably much talked about.

This Govett-Brewster show is downstairs by the entrance, in the two galleries on either side of the main stairs. One room deals ostensibly with perfume or aroma, its presence, condensation and containment; the other with vaporised water, its dissemination and extraction from the air.

Gallery One on the left presents four works thematically referencing the olfactory and the viewer’s imagination: Your Memory of Rain Encased, 2011, has a scent mimicking freshly fallen rain, made by a Spanish perfumer and poured in liquid form between two glass sheets that are clamped together; Your Memory of Rain Encased (UV Release), 2010 has the same perfume contained in a large glass capsule coated with silver nitrate to prevent light degrading its contents; Your Memory of Rain Released, 2011 has the smell sprayed onto a sanded part of the gallery wall on one side and into a cut-out hole in the wall on the other. Another sculpture on the short wall at the end, Landing the Sea, 2010-11, uses natural sea spray. A photograph shows the artist standing on a rock over wildly breaking waves, holding the very large glass tube (presented alongside) so its mouth is open to catch droplets.

Continuing with water, Gallery Two on the right has Various Solid States, 2010-11, a work which features the moisture visitors introduce into the space with their breath, that when removed from the air by a dehumidifier is then mixed with plaster-of-Paris by gallery staff, to be poured onto laid out Bubble-wrap (gridded air in tiny half-spheres) and left to set. The delicately textured thin sheets, once hardened, are stacked against the walls, and increase over the duration of the exhibition. They are fascinating objects, like waffles that can be visually consumed.

Nearby is Two Sides Coalesce, 2010-11, with a large glass cube with no floor, suspended from the high stud by cables so that air from the rest of the gallery can creep inside. Within it are a vaporiser and a dehumidifier. When the later is full it is used to fill up the former. The ‘Two Sides’ of the title seem to be the two essential parts that make up an artwork as described by Duchamp: the viewer and the viewed art object. Water here from both is mingled, vaporised and circulated. The sculpture seems to reference a couple of hermetic tank works by Hans Haacke (containing moisture) and Jeff Koons (a basketball in fluid).

Not only do the glass cube shapes repeat on both sides of the staircase, sometimes serving as a plinth that holds a large vial or being an enclosed visibly perfume-free space, but they also take on properties of a hermetic art universe, held suspended in a manner reminiscent of Australian painter Peter Tyndal’s examination of the social forces that maintain the ‘Art Cult’.

This to me is the best show by Mitchell I’ve ever seen. It is particularly cohesive conceptually, with its methodical ruminations on art viewing processes, ‘radiant’ but invisible matter and how we might detect it, and the authoritative power of language. For like Mitchell’s earlier work of witches’ spells, unseen perfume in a vial or sprayed on a wall (if say, you can’t smell it) is something we take the artist’s word for. Plus this touring, changing exhibition (to go to Dunedin Public Art Gallery and to ARTSPACE) looks characteristically elegant and beguiling with its clinical scientific ambience. Form and idea marching tightly together, side by side.