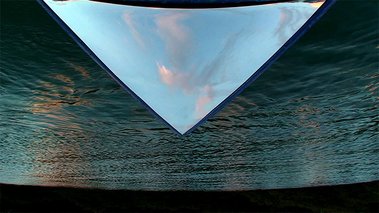 Dadson has a long history of being passionately interested in Chinese culture - as evidenced by many of the From Scratch projects - so in Starkwhite the Beachhaven imagery seems to demonstrate the Taoist view of heaven and earth reflecting each other. Like Yin and Yang they are intimately connected.

Using a three-sided plasma screen triangle in the centre of the large Starkwhite gallery, with three still photographic images on the walls from the three dvds being played, Phil Dadson presents a meditation on the natural world and the universe by filming his kayak’s reflective mirror-coated prow as it slowly moves through mangrove bordered, estuarine waters - out where he lives at Beach Haven.

By aiming a fixed camera at a prow which is high out of the water, and filming at dawn, noon and dusk as he gently paddles in the space between the bordering lines of trees, he records the heavens and their changing relationship with the water, land and vegetation he passes through. The celestial activity (mostly daytime - with wisps of cloud) is in fact spatially occurring behind him, so to create a more settled ‘logical’ viewing experience, he inverts the recorded imagery on the screen. The gently curved prow/sky triangle then hovers in front of the viewer, hanging down from the upper edge. The water is at the bottom, where you’d expect it to be, although originally because of the low angle of the camera, it would have been at the top.

Dadson has used inversion before, especially in some of his Polar Project works, but here because the distinction between the water and sky is so pronounced (unlike say earlier works with snow-covered Antarctic landscapes and white skies), you scan the ripply water looking at its reflections of coloured clouds in the sky, and then compare with the same cloud shapes in the prow reflections. This toing-and-froing between the lower expanses of spread out water and the upper more condensed, curved celestial triangle that seems suspended like a pinned up sheet, is what makes the video compulsive viewing: contemplating two separately distorted versions of clouds we can never see directly.

The light changes rapidly from time to time as different sections link up, taken from different parts of the day. Sometimes, very rarely, there are startling moments when shimmering ‘water’ and open ‘sky’ overlap, as when the kayak suddenly bumps into some foliage or jutting out mangrove roots, causing bits of inverted vegetation to cross the prow edges, briefly merge into their own reflections and then separate.

As for the title, the water here is not really deep. Deep Water obviously means a fluid well beyond mere H2O, a sustance far beyond this country, or this planet - something directed skywards. A uniting penetrating element.

While the sound of gently lapping or swishing water is naturally a consistent feature, Dadson has also mixed in the sound of some bells he recorded in Karlsruhe in Germany, allowing their ringing notes be sustained - like with a piano pedal - drawing out their vibrating textures so they overlap, merge and mingle with sounds of cicadas and birds. The effect is unnervingly haunting.

And even though these videos (one on each screen) were made using the natural environs of Auckland’s North Shore, there is something subtly Chinese about the visual and conceptual relationships. Dadson has a long history of being passionately interested in Chinese culture as evidenced by many of the From Scratch projects. In Starkwhite the Beachhaven imagery seems to demonstrate the Taoist view of heaven and earth reflecting each other, for like Yin and Yang they are intimately connected so that Nature has a harmonious relationship with its opposite, the Divine. In the triangular prow we also see Dadson’s interest in triangles as structuring devices, as shown in the Triad 1, Triad 4 works and Gung Ho 1, 2, 3D.

Symbolic geometrical structures like this in some artists’ work can be a bit forced, but here they don’t overimpose. Whilst the plasma screens might seem a pinch small for the gallery space, the experience is in essence intimate, for as you move around the three screens you can observe different vistas of the Starkwhite space and how they interact with Dadson’s imagery. You don’t want too many people in the room because you need to stand close to hear the audio properly, and the sound is crucial. Very beautiful, brittle and intricate, like the images that go with it.