Once More With Feeling 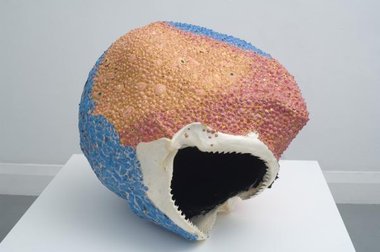 So this Ivan Anthony show with five artists has Feelings as a focal point: emotional rumblings perhaps, visceral stirrings in the mind, not aches but almost indecipherable moods. As a heading though it implies emotion is all you can be certain of. All that these works do.

Despite this show’s title’s proclaiming of emotion, some art - not much, some - you might have noticed has nothing to do with feeling and is all about cerebral exercise. It may not be remembered (assuming that is an aim) no matter how clever it is. Perhaps that forgetfulness by art history doesn’t matter, for let’s face it - all art, every scrap of it, has a ‘feeling’ component built in its activity somewhere. Just the investment of its existence proves that.

So this Ivan Anthony show with five artists. It (for a second time) has Feelings as a focal point. Emotional rumblings perhaps, visceral stirrings in the mind, not aches but almost indecipherable moods. As a heading though it implies emotion is all you can be certain of. All that these works do.

Rohan Wealleans’ contributions have impact because they disturb and threaten. A big shark-jawed blowfish is by the door, with a ballooning disease-textured hide that seems about to burst. And Grotesk, a blue anemone-like warty tumour erupting through a shredded comic cover, looks like it is about to squirt - but thankfully is safely contained within a Perspex box.

Brendon Wilkinson’s model of a section of grey railway yard has a dog sliced in two on one edge of a square standing on a swivelled stack of plywood sheets. On the top a watchtower is being dismantled, a man studies two mysterious puddles and strange mould-like growths are springing out of the ground.

In a less creepy work that is poignant, tragic but funny, Ronnie van Hout presents a rubber bodied alien in his pyjamas suspended high in a gallery corner. It could be a person dressed up in an alien body-suit inside the PJs, for across his/her chest is a handwritten sign urging the gallery visitor to forget, but ‘forget’ what? Forget the sleeper’s ‘real self’ is inauthentic if their body and attire are inauthentic? That everything we see is calculatedly superficial?

Fakery, I think, is also the content of four 1999 Andrew McLeod ‘tribal’ sculptures. These mysterious provocative objects look hand carved, and appear to be Hawaiian weapons or gods. They are highly ambiguous, looking functional and stylistically ‘primitive’ - and very unassertive, as if abandoned. Low key, they fascinate over time.

The work by Patrick Lundberg is also low key. It looks at the sociology of contemporary art exhibitions by painting an image of a hook with vertical and horizontal taped off masked lines and incised marks within them. It is on a piece of board suspended by a chain from a hook on the gallery ceiling. It seems to allude to Julian Dashper’s Chain series and to Australian artist Peter Tyndall with his studies of the Art Cult, and could be attacking us for visiting the space, for perpetuating the milieu that the artist himself seems uneasily complicit with, and for obsessing over historical context - suggested by the scratched off paint in its loop.

This smart show needs time to ponder over. Excellent but not obvious.