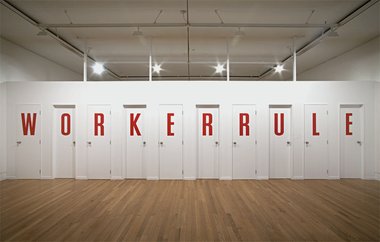 Described by Lucy Lippard as ‘the quintessential dissident theorist/artist,' Barber's practice is no panacea. He continues to deal to, and with, fundamental issues about making art that is ‘engaged and committed [to the] task of acting on culture as distinct from an enactment in culture.'

Bruce Barber Works 1970-2008 may the best arts publication of 2010. Surveying forty years of work by an artist who considers himself a resident of both New Zealand and Canada, it also provides a comprehensive discussion on the development of conceptual art in New Zealand in the 1970s. Responding to social and political issues and shifts in international arts practice, performance, installation and video by artists and teachers such as Jim Allen (Elam) and Martin Mendelsberg (Ilam) altered perceptions about what New Zealand art could be. Editors Stephen Cleland and Blair French note that the impact of performance and time-based practice during this period is immeasurable. Yet, read any current history of the country’s art and you would scarcely know that it had happened.

Interviews by Emma Bugden and Brad Buckley, and essays by Barber, Christina Barton, Mark A. Cheetham, Marc Léger, Alex Gawronski and Laura Preston survey an arts practice that has consistently questioned the relationships between artists, arts institutions and society. In early performance works such as Stock and Bonds (1975) Barber was shackled like a medieval prisoner for three days in the Auckland City Art Gallery, berating the public outside who watched on close circuit television. Barton observes that Barber acted as ‘whistle blower’ and participant, exposing the gulf between the art gallery and a public whose participation is circumscribed by the politics of this environment. Stocks and Bonds dealt with fundamental aspects of human behaviour, (the artist as village idiot and object of public abuse), and philosophically questioned the role of the art institution. It’s an issue Barber has often revisited in his practice.

As a student at Elam in 1969 and owner of a copy of the Whole Earth Catalogue Barber belonged to a generation that came of age following the collapse of the utopian vision of the 1960s, facing the reality of giving peace a change through active social and political change. Barber notes the influence of his tutors Jim Allen, expatriate sculptor John Panting and Steve Furlonger, recalling the latter’s comments, ‘Surely painting is dead?’ He also observes that Allen saw himself and his students as ‘individuals with a right to express themselves,’ preferring group seminars and critical sessions to lecturing. Add to this the influence of publications such as Janet Wolff’s The Social Production of Art, art povera, Fluxus, Phil Dadson, the Scratch Orchestra, and Marxist feminist Germaine Greer’s visit in 1972, and it is apparent that by 1973 serious New Zealand art could no longer retreat to the safety of a provincial nationalism.

The paradox of Conceptual Art as socially engaged, yet also supported by economic and political structures it was often seeking to undermine was not lost on Barber and it is the consciousness of this in his writing and practice that equally makes this an important publication. When Barber negotiated homeless woman, Katherine Grant’s residency over three weeks in the Walter Phillips gallery in Banff, Alberta in 1999 he ensured that she acted as an ‘active collaborator.’Barber also expresses concern with the current resurgence of interest in his work from the 1970s, questioning the agenda of galleries as ‘akin to the recycling of the fashion industry.’ Similarly, he critiques the art world’s present interest in community, noting: ‘Because community collaboration, consultation and participation are today encouraged and even mandated by private and public funding agencies, urban developers, museums, festival organisers and so on - activist artistic practices threaten to become reformist and conservative in their implications.’

It’s a timely comment, particularly in view of the media criticism and outrage that accompanied Tao Wells’ The Beneficiary’s Office in Wellington’s Letting Space public arts programme in October 2010. Although Wells often seemed less than convincing in defending the principles of humanity working less and consuming less, even putting such a concept into the public arena was substantially more than many publicly funded artists’ projects or galleries currently achieve in their civic communication, preferring to hold exhibitions aimed at their peers and arts professionals under the guise of community engagement.

In contrast, Barber frets over such issues, arguing for a moral responsibility in the arts that is rarely discussed. Described by Lucy Lippard as ‘the quintessential dissident theorist/artist,’ Barber’s practice is no panacea. He continues to deal to, and with, fundamental issues about making art that is ‘engaged and committed [to the] task of acting on culture as distinct from an enactment in culture.’ Bruce Barber Works 1970-2008 is a welcome publication.