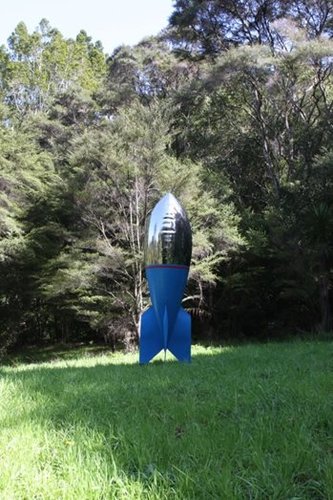 Such calculated perversity is found also in David McCracken's shiny construction of a ‘grand slam' bomb as homage to its inventor Barnes Wallace, its silver and blue pristine form ominously poised vertically in a forest clearing - as if waiting for detonation.

We all know sculpture can consist of just about anything these days, from conversation over a Pad Thai to plaster casts of the airy spaces found inside somebody’s library, yet for lovers of contemporary sculpture who might see it as primarily a crafted artefact, fifty minutes drive north of Auckland can result in rewards, namely an hour’s walk through some beautiful bush and grassy hillocks - with the chance to closely examine forty-two works by thirty-nine artists.

Brick Bay’s beautifully kept tracks are flanked by its vineyards, spectacular vistas, tranquil ponds and adjacent farms. The art varies from giant children’s windmills (Leon van den Eijkel) and sleek white arabesque forms that swivel in the breeze (Phil Price), to works that are invisible and only heard (Dean Roberts), or else camouflaged through the use of mirrors (Chris Hargreaves).

Whilst the movement of sculptural components often plays a key role in getting you to linger (such as Jeff Thomson’s pieces of curly corrugated iron - floating, bobbing and twisting in a pond), the understated also has a powerful attraction all of its own. Hargreave’s mirror pup tent mesmerises with its silvery stainless steel flanks confusingly reflecting the trees and sky, whilst Dean Robert’s soundtrack is emitted from underneath a footbridge in some woods. His faint audio seems to reference the story of the troll and the Three Billygoats Gruff, with a Golemlike voice whispering to a surging accompaniment of muffled nightclub piano, guitar and bass.

Promoting his usual interest in unconventional functions for language, Dane Mitchell’s bronze plaques are like Robert’s work, easy to miss. Attached to small boulders they refer to planted or recently chopped down trees - seemingly mocking the green idealism of Joseph Beuys (‘this tree was felled to commemorate abandoned hope’) or jubilantly celebrating futility and pigheadedness (‘this tree was planted to commemorate irreconcilable differences’).

Such calculated perversity is found also in David McCracken’s shiny construction of a ‘grand slam’ bomb as homage to its inventor Barnes Wallace, its silver and blue pristine form ominously poised vertically in a forest clearing - as if waiting for detonation. The other side of the coin is Peter Nicholls’ black steel sculpture of twisted, torn and perforated sheets that alludes to the bombed cathedral of St. Peters in Munich. Nothing smart-arse or ironic here.

The vulnerability of architecture is also stated by Neil Dawson in his construction of a small Maori whare as a screenprinted-on-steel ‘house of cards’. Such wit is also found in Mary-Louise Browne’s neon ‘Live Wire’, beckoning radiantly (and ominously) in a dark copse of damp bush, and also Peter Lange’s giant corkscrew - made only from bricks as a reminder of the particular viticultural estate we are visiting, that sustains the presentation of the art and assists its finding of a market.

This venue provides a good way of enjoying a survey of New Zealand talent at your own speed. There is a lot to see, and you can sample some wine and food in the stunningly designed cafe if so inclined. As a rule I’m not particularly keen on outdoor art treks, but of the few I’ve done this is probably the best. It’s not too arduous, you don’t get badly mauled by the sun and wind (though do bring your mosquito repellent), and a lot of the work is comparatively innovative, keeping you deliciously surprised. Well worth devoting a day to.