Spong and Heath at The Physics Room 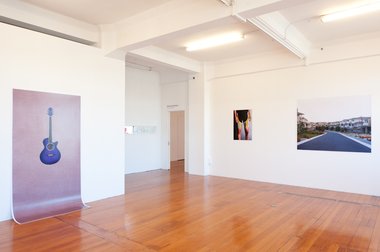 For Spong, the Ballets Russes provides the rest of such inspiration. This often would be the cause of great eye-rolling at what has become something of a cliché in art, started by Degas' stage-loads of “little rats” and finally killed by Picasso. All hail the Gesamtkunstwerk. There is a school of thought that suggests such muddling of categories is a bit twee and smacks of frustrated ambitions and overreaching. However in this case it works quite well.

Auckland-based Geoffrey Heath graduated from Unitec School of Art and Design in 2000 with a Bachelor of Design in Visual Communication Design, and he has exhibited at number of times at City Art Rooms. Scheduled Entertainment was the first chance I’d had to see a lot of his work, and it is very good indeed.

Within his suite of photographs in the larger space of The Physics Room, the immaculate large and small format images gently catalogue, and perhaps even fetishise, the banal little pleasures and man-made ersatz dreams that endgame consumer capitalism, mass popular culture and dying imaginations foist upon us. Small dreams of suburbia. Ironic, yes, but difficult to read as cynical.

The images seem to fall loosely into three categories. Some, like Your indifference used to be attractive, a helmeted and leathered biker standing in anonymous woodland, enigmatic and threatening; Reception, with its pair of female legs (Dead? Murdered? Drunk? Unconscious? Merely napping in heels?) poking out from beneath the elaborately decorated Christmas tree; and Happy New Year, a middle-aged man dressed like a small town accountant wearing a silly and strikingly incongruous party hat for the dreaded office party, feel like stills from some unmade David Lynch film. They speak to ancient hardwiring in our brains that demands stories by inviting us to make up our own narratives to fill the void.

Others, like Bullworker, a piece of exercise equipment lying on a motel-bland beige bedspread; or Idol, a purple, child’s guitar lying on generic off-white carpet like an amateurish reliquary; or the lycra-clad cyclist with the gashed knee in The Fall, have an aesthetic familiar from trading websites and private blogs. They wave their Barthesian punctum in our faces in a display of passionate hobby and personal enthusiasm, with just the faintest suggestion of something unheimlich and sinister. Do we really want to get that close to the inner life of a stranger, especially when it seems to be aiming so low?

The third category is probably the most straightforwardly pictorial in that while still fetishising the bland, they lack a hook or punctum. Whisper Cove, for example, frames with delicious aestheticism a bend in the road in what looks like some frightening conformist planned gated community, a superficially pretty slice of paranoid bourgeois utopia in Stepford pastels.

Auckland born, and a 2001 graduate of Elam, Sriwhana Spong has for the last few years actively been exhibiting on the international circuit - Australasia, Europe, the United States - and is certainly no stranger to dedicated art watchers in New Zealand.

In the Metropolitan Museum of Art in New York there is a twelfth century sandstone sculpture from India representing a dancing woman. Known as “Dancing Celestial”, that sculpture provides much of the inspiration of Spong’s installation of the same name.

The Ballets Russes provides the rest, which often would be the cause of great eye-rolling at what has become something of a cliché in art, started by Degas’ stage-loads of “little rats” and finally killed by Picasso. All hail the Gesamtkunstwerk. There is a school of thought that suggests such muddling of categories is a bit twee and smacks of frustrated ambitions and overreaching. However in this case it works quite well.

The paraphernalia of dance is all around The Physics Room’s smaller space. A barre still wrapped in its plastic wrapping is fixed to the wall by crudely lumpen open cast brackets, and how satisfying it is to see installation components so obviously made rather than just bought at the local hardware store. At the far end, like some ballet prop or bid of scenery, is a rack draped with stained fabric, including a piece crudely daubed with black paint to look like ermine.

As part of the installation, suspended between panes of glass, are three collages of photographs from books. One depicts Bronislava Nijinska in Les Noces. Another is the incomparable Lucia Joyce, and the third an unknown dancer in the lead role of Kikimora in 1910. Dancing Celestial is thus a potential rather than actual space, a celebration of the feminine grace and power that may never actually fill and activate it.

Nijinsky always said that the secret to his tremendous performance was that “I leap, and then I pause”. Dancing Celestial doesn’t say a helluva lot new in its leap, but it’s definitely got the pause.

As a curious aside, photographs were taken of that twelfth century sculpture, to be included in this installation, but by some fluke of the airport scanners, they were ruined. Given that so much of Dancing Celestial lies in the absences and half-complete, that’s a bit spooky.