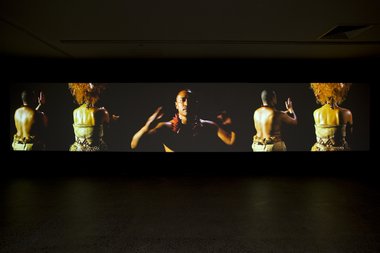 The first section of this film is the most interesting part, and the last too similar to a tourism documentary, a recording that is commercial in feel, of a complex and vibrant community. The glowering anger at the beginning is refreshing with its elegant graphics, moving letters, manoeuvring syntax and stinging phrases. Yet for all that, it's probably wasted in an art gallery.

Tanu Gago
You Love My Fresh
Curated by Ema Tavola

Tanu Gago is a Samoan film-maker who here presents a moving image installation of three screens butted together, part of a joint venture between Te Tuhi and Fresh Gallery Otara. The work is a celebration of South Auckland Samoan music and dance - and indirectly food - mixed with a gritty confrontational rhetoric. It’s very political; very polished; very slick. Yet unexpectedly complex as well.

Using the wide screen there are three parts. The first - in black and white - directs a message to mainstream white culture, using yellow block lettering and a graphic tone and rhetorical voice similar to Barbara Kruger.

One section says: I feel redundant of your First World. In your mind we are all blacks. You want my Fresh. You want my labour. The title refers to ‘Fresh Off the Boat’ as a source of cheap manual labour, but also the Exotic Other, a cultural novelty.

The second part (also in black and white) features Samoans working on building construction sites and then preparing food as a community for a feast, with God Defend New Zealand playing in the background. It is a contrast to the distorted perceptions being attacked in the first part, where now family and wider group activities are being shown as a reply. Obviously the soundtrack is intended to be ironic, because of what preceded it, yet not necessarily so. There is an ambivalence, an affection for Aotearoa. The music is lyrically beguiling and draws you to the film from elsewhere in the building

With the third section (in colour) we see a male and female performer dancing in traditional costume on the three screens. (I wondered if the woman was a fa’afafine, as that would complicate the interpretation.) The music is frenetically percussive in mood. Whereas the sound at the beginning was soothing and drifting in contradistinction to the mood of the language, now towards the end it crackles in a snappy, penetrating staccato of loudly beaten drums

However the first section of this film is the most interesting part, and the last too similar to a tourism documentary, a recording that is commercial in feel. The glowering anger at the beginning is refreshing with its elegant graphics, moving letters, manoeuvring syntax and stinging phrases. Yet for all that, it’s probably wasted in an art gallery.

Well maybe ‘wasted’ is too strong - for the Pakuranga audience is surely appreciative - but Gago’s subtly complex project needs to be in public cinemas or on the sides of downtown buildings where it can generate more impact. Where despite its use of aural seduction it can shock and genuinely offend. Where the audience will find it hard to take it in its stride. Where ‘edge’ is genuinely disturbing and not glib marketing - and where the social issues it raises are analysed and talked about in a lively but serious fashion.