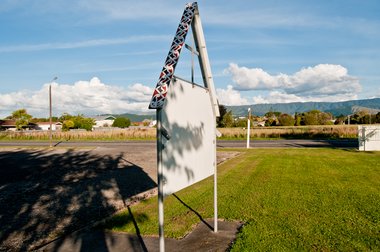 A photograph of a sign decorated along its top border by kowhaiwhai is shot to the side of a vacant car park and grass verge looking out to a space between the highway and a suburb. In its composition the image neatly plays with triangular forms that follow the sign's wharenui shape. We see the white back of the sign at an angle but not its front. Like the more straightforward image of the underside of a silver fern here it suggests a personal upturning of iconography to look for its other sides.

The moments that we rarely talk about, but often portray in painting and literature, are in the spaces between places and things. Not doing, but idling between one point and another. It’s in these moments that we start to question our connection with the world around us, searching for a sense of home or identity in it. For sure there’s joy as we give ourselves time for our thoughts to turn over. But, truth be told, it can also be a lonely, unsettled vacuum of time that we spend a lot of our lives in, filled with the sadness of yearning.

I say we often portray this, but in photography not so much. Photographs generally tend to lock things, moments and spaces down. Yet this in-between territory is the site of some of photographer Peter Black’s most interesting work. His wide-ranging exploration of this perspective runs through his latest suite of images at Photospace.

The exhibition At Home is something of a mixed bag in terms of the strength of individual images, or the way it reads as a whole, but what I like about the show is the sense of an artist (like his very different contemporary Peter Peryer) constantly testing out new ways of looking and being through a camera. For Black that becomes an expression of an uneasy sense of place in the world.

In his short introductory note Black describes the exhibition as looking for a new sense of feeling at home and of identity. Looking for a new way to see, to feel and to be. It does so on the one hand by exploring different takes on familiar icons out on the streets, but also through exploring the symbolic potential of more mundane objects, and the way both he and his subjects are adrift, looking for something they haven’t located.

There are a handful of strong images here that could easily have made the cut for his City Gallery survey exhibition seven years back, but the show is far more experimental beyond them.

The image used for exhibition promotion is quintessential Black - physical absurdism in a close-up snap of a three way animalistic exchange between humans and a dog, all in beautiful motion. As an image it’s the least on song with the exhibition’s concerns, but too good not to show. Yet the humour and humanity bottled in that one image runs through the work - joy and sadness in one.

Black continues to wrestle fruitfully with the troublesome perspective of the street photographer. Someone not in the scene but still implicated within it (his shadow is a common intrusion): someone in between. This tension is strongest when the figures in the frame acknowledge the camera. Yet these are never portraits - again there is a kind of animalistic exchange, physical and instinctive.

Two youths sit on a park bench, both welcoming and wary. Another set of young men monkey around on the top of a block of toilets in the golden light. Black is out in the unsettled territory between the documentary and portrait, where we all have to operate.

This exploration of being on the edge of things and looking at things differently is also explored in the non-figurative images considering cultural iconography. A photograph of a sign decorated along its top border by kowhaiwhai is shot to the side of a vacant car park and grass verge looking out to a space between the highway and a suburb. In its composition the image neatly plays with triangular forms that follow the sign’s wharenui shape. We see the white back of the sign at an angle but not its front. Like the more straightforward image of the underside of a silver fern here it suggests a personal upturning of iconography to look for its other sides.

Other images like an ‘art’ sign hung upside down, or a shop window display of a pearl necklace on a black bust between two carved Maori figures, feel overly familiar tactics in their ironic juxtapositions of objects. Fresher and more complex in speaking to Black’s ideas is an image of one end of Brydee Rood’s Te Ra temporary billboard artwork on Willis Street (recently dismantled) punctuated by angled introduced trees, leading the eye to a man in light with an accordion (which he isn’t playing) and festive hat outside a shop whose sign reads ‘Liquidation Sale’.

The organisation of the thinking here is difficult to follow (a little like the jigsaw of a school headshot photo that he photographs), but it does express Black’s own sense of things not feeling resolved; of being at an intersection of ideas. An early image in the exhibition is a bird eye view of a pedestrian intersection in a busy road, full of figures, lines and signs. The complexion of moving visual elements is a signpost for the state of the exhibition as a whole.

Largely these images are located in the spaces in between places and familiar homes (the spaces beyond the frame of a Edith Amituanai or Andrew Ross photograph, say). They also speak of the provisional and makeshift-looking nature of so much we build in New Zealand. Consider here the plastic garden furniture beneath the decoration of a necklace of brightly-coloured washing pegs.

The empty spaces here tend to be the domain of the teenager and tourist, both well represented. Black also adds to his collection of photographs of people taking photographs - two tourists gleefully take a picture of themselves, at home in their freedom. One of my favourite images is of a group of teenagers outside a KFC. Compositionally it’s a fantastic image, all twisting figures in action, but in its banal ‘hanging out’ subject matter and lack of urgency it’s no Raft of the Medusa.

Loneliness and solitude, and sadness and joy are close cousins. There is in the recognition of this in our existential moments something of the humour and despair of Samuel Beckett: sitting on a bench waiting for Godot. Shot at a distance from behind, a man sits in a wheelchair near a lone streetlamp in a park, facing out to sea. We can’t see his face and read his attitude, but the wheelchair could easily be symbolic of the handicap we all have in feeling adrift in space and time as daylight begins to fade.