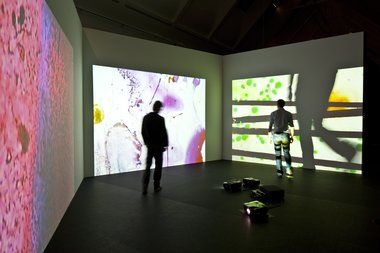 Due to the inherent difficulties of generating handmade images on film, direct animation doesn't lend itself to pictorial illusion or linear narratives. The imagery tends to be atavistic, animistic, frenetic; and due in part to this visual proximity to pure abstraction, the conceptual content of this genre has been largely overlooked. Since they sit so ambivalently between fine art and cinema, both camps have historically positioned these films as being principally concerned with formalism and material experimentation.

Although Len Lye described the fine art film as “the Cinderella of the fine arts” in respect to the medium’s kinesthetic qualities and unrealised potential, today, his allusion to Cinderella has an entirely different significance. It would seem that there are few media that deserve to call themselves an endangered art more than cameraless film animation; its material substrate, celluloid film, is itself sliding towards obsoletion; after nearly a century of exhaustive experimentation, it’s difficult to conceive of new techniques that can applied directly to film; and the future of animation has shifted profoundly towards digital production (coming full circle this respect).

Cameraless film refers to a method of producing moving image where the artist or filmmaker bypasses the photographic process and directly manipulates film stock (either additively or subtractively) with methods such as drawing, collage and painting. Due to the inherent difficulties of generating handmade images on film, direct animation doesn’t lend itself to pictorial illusion or linear narratives. The imagery tends to be atavistic, animistic, frenetic; and due in part to this visual proximity to pure abstraction, the conceptual content of this genre has been largely overlooked. Since they sit so ambivalently between fine art and cinema, both camps have historically positioned these films as being principally concerned with formalism and material experimentation. But revising this apprehension, Zelluloid: Filme Ohne Kamera brings together a selection of films, tracing the ideational threads which significantly inform and influence this manner of filmmaking.

In 1935, Len Lye’s film A Colour Box was so different in its use of filmic language that the Brussels Film Festival had to invent a new prize for it to win. As vivid and enchanting today as they were visionary and challenging, Lye’s animated shapes dancing to the percussion of popular Cuban and African music were a hit with audiences more accustomed to viewing cinema in its industrial, commercial capacity. The very act of painting abstract imagery on film was a conceptual leap in terms of severing film’s indexical relationship with the world and using it to explore an abstract, synaesthetic experience.

Norman McLaren, also a leading figure of experimental film and a contemporary of Len Lye, was engaged, in a more technical sense, with integrating the principles of moving image with those of sculpture and music. In 1940 (decades before its time), he presented Dots, an electronic drawing where the size and distance of shapes regulate the quality and intensity of the soundtrack.

The younger artists featured in this show prove William Moritz correct - that “[Norman McLaren] didn’t do everything that can be done with the direct film.” Jennifer West’s humorously inventive process’ combine an Arte Povera approach to filmmaking with Pop: Marinated Film - the roll of 16 MM I had in the fridge for over ten years (16 mm film negative marinated for several months in: Absinthe & XTC, Pepsi & Poprocks, Jim Shaw’s Urine, Red Wine, Coffee & Detox Tea, Aphrodisiacs), (2005) and A 70 MM Film Wearing Thick Heavy Black Liquid Eyeliner That Gets Smeary (70 mm film leader lined with liquid black eyeliner, doused with Jello Vodka shots and rubbed with body glitter), (2008), subject film to the same process’ and substances usually dealt with by the human body.

West follows in a tradition of ‘alchemical’ fimmaking extensively explored by Stan Brakhage in the 60’s and Luis Recoder in the 90’s. Of the three films by Brakhage included in this exhibition, Mothlight (1963) is the most remarkable in terms of its technical invention. At once forensic, delicate and mosaic: moth wings have been adhered to 16 mm film. Appearing towards the end of the exhibition, a single film by Recoder, Available Light: Yellow-Red (1999) comes as a welcome break from the cumulative neuralgia of flickering images. With an uncanny semblance to Rothko’s Orange and Yellow (1956), this silent film was produced by exposing film in a controlled, light proof container.

One of the most multi-layered works is Iimura Takahiko’s White Calligraphy (1967), composed of 12,000 ideograms from the Kojiki (a principle text in Japanese mythology) etched into black emulsion. In this understated, minimal gesture, Iimura sums up semiotic systems involved with image projection: extracting meaning from the interpretation of symbols depends on aesthetic intuition as much as it does the ability to make sense of language.

The labour that goes into creating these films is staggering. Jose Antonio Sistiaga’s Impression’s in the Alta Atmoshphere (1988) is composed of 10,050 hand-painted 70mm format images. At the other extreme is Dieter Roth’s constructivist Dot, a film strip serially pierced with a leather punch in a process analogous to concrete poetry. Of the works shown here (by a total of 21 artists), the number of individual images amounts to 160,000. Despite the slightly awkward installation (essentially open-plan but the narrow dimensions of the Schirn’s west wing force the viewer through a procession of spaces partitioned by curtains), what becomes most captivating about this presentation is the endemic energy that bleeds from one film to the next, exploring the structural limits of film and its relation to other art forms. 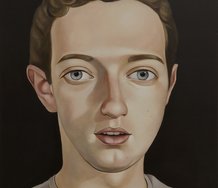 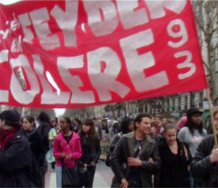 What is Waiting Out There