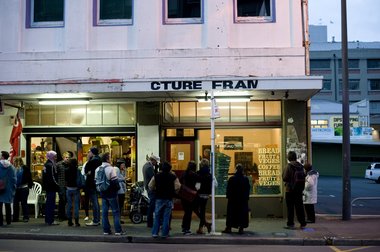 As I stood on the other side of the street last week and watched the Campbell Live current affairs reporter repeatedly fail to do her live to camera walk-and-talk spiel, because she simply could not navigate the mass of people milling at the store's entrance, it was clear that this artwork had achieved that rare phenomenon of popular lift-off.

It is a testament to the complexity of Kim Paton’s Free Store that pinpointing the meaning and impact of the second Letting Space Project is particularly difficult. What started out as an investigation into the economics of waste in the grocery business and the possibilities of redistributing surplus goods in a disused shop, became in its two short weeks of operation something of a social and cultural phenomenon. The contested and conflicted meanings seemed to grow exponentially as the word got out around Wellington - and soon after New Zealand - that you could score free food, coffee and other stuff from the old Nut Shop on Ghuznee St. As I stood on the other side of the street last week and watched the Campbell Live current affairs reporter repeatedly fail to do her live to camera walk-and-talk spiel, because she simply could not navigate the mass of people milling at the store’s entrance, it was clear that this artwork had achieved that rare phenomenon of popular lift-off.

Of course it is not surprising that an artwork whose raison d’etre is to give away free food should garner popular interest, especially in tepid economic times. But it was the feeding frenzy of lines of people who had quickly figured out the morning and afternoon delivery times that seemed to surprise the artist and her team of volunteers. Very quickly Free Store became a highly functional economic entity for an eclectic church of people, each with wildly varying degrees of want and need. It was the speed of the process through which the store (promoted as an artwork) in a matter of days became a principal destination in the daily lives of many Wellingtonians, that seemed remarkable.

As a social exercise in interrogating the false economics of production in capitalism and in particular the murky terrain of wastage, Free Store was particularly compelling. So much of the work revolved around approaching supermarkets and food stores, pitching the idea, and making a case for why these businesses might participate. While the audience is not privy to these discussions directly, the list of suppliers was chalked on the blackboard in the store. It made for interesting reading. Many of Wellington’s bespoke small food emporiums did not participate because they amazingly claimed to not generate any wastage. Seeing these community-based retailers as her likely bread and butter, the artist interestingly secured the largest consignment from a trans-Tasman corporate conglomerate. The list of supporters then was not a who’s who of small business communitarians but a rag-tag mixture of big and small, local and global. This unusual coalition of brands served to rupture the pat perceptions we might have of who might be committed - even temporarily - to new models of waste-free redistribution.

Yet as an artwork the results are less straightforward. While obviously prefaced as art, and with a number of key antecedents that mine related territory such as Superflex’s Free Shop and to a lesser degree Tom Marioni’s free beer projects, the work is far less controlled than these examples - in the sense that the guidelines or parameters are much looser. Where Superflex and their series of free shop works have very specific rules, such as ‘the customer must not realise the goods are free of cost before the salesperson makes out the bill’, Paton’s approach mostly eschews this level of control. There are no obvious guidelines posted in the store and the shop is not aesthetically embellished beyond a functional look. Such an approach pushes the work towards that difficult juncture that is the art/life divide, challenging the audience to experience or recover cultural resonances beyond the economic imperatives of the work.

As Claire Bishop has argued in her essay The Social Turn: Collaboration and its Discontents, it is difficult in many socially based artworks that emphasise community engagement and interaction to distinguish between successful and unsuccessful examples in terms of artistic criteria. Bishop highlights how aesthetic considerations are often irrelevant - or at least muted - in many recent socially focused works making it especially difficult to impose artistic criteria on projects that have a far broader range of concerns.

Paton’s Free Store certainly operates in this difficult space prefacing economic issues and their related social consequences as being front and centre in the work. She is clearly passionate about shaking up an existing supply system that is irrationally flawed and senseless on a range of social justice and environmental levels, but one senses she is less enthused by the modalities of contemporary art. Paton’s uses her status as an artist to develop a specific platform from which to work towards a systemic transformation of economic systems and her tentative excursions in this regard with Free Store over such a short time-span is impressive. One wonders however whether the logical direction for her practice points away from the highly nuanced and niche properties of art, with its rules and elite codes, towards a more inclusive and influential engagement with interventionist economics?

Antecedents is the word oft used by Henry Davidson in his MA thesis to describe my "Vacant lot of cabbages" ...

I never cease to shudder hearing Claire Bishop's ideas being shoveled around and if her use here by Cross is ...

I never cease to shudder hearing Claire Bishop's ideas being shoveled around and if her use here by Cross is at all accurate with regards to such a limited and dam it, lazy idea of aesthetics then, double shudder.

Antecedents is the word oft used by Henry Davidson in his MA thesis to describe my "Vacant lot of cabbages" (1978) as antecedent (which has causal connotations... not simply precedent/temporal)for the raft of works around such temporary art work ...esp. One day sculpture and their following instantiations, gap filler, Letting Space etc. Henry's purpose was to propose his idea of 'event specific art' it's a good read and a consistent academic approach...

The Cabbage Patch (in giving away free coleslaw) and the use of otherwise unlettable vacant space - as venue, frame, radical (root) meaning, the accessibility of free food growing property and a raft of connotations around market/capitalist hegemonies moving art out of the usual suspect oligarchies et al et al... would or could have also been cited here as antecedent to Kim's store.

But as usual our art critic/writers look to Europe for permission to ontologise.