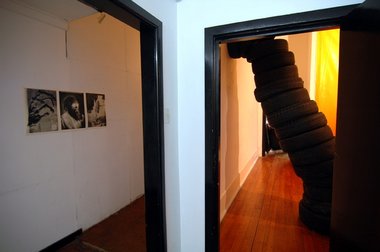 There are also plenty of references to Hood's obsession with the Kiwi obsession with motoring - the towering Babel of car tyres buttressing a wall, the delicately constructed box-weave of broken road markers (the latter presumably the leftovers from a fantastic installation at The Physics Room, which by rights should have gotten him nominated for the Walters Prize). Cars, and a love of cars are one of the symbols of egalitarian democracy and social levelling that Hood likes to play around with.

No, sprawl is full-gloss murals on a council-house wall.
Sprawl leans on things. It is loose-limbed in its mind.
Reprimanded and dismissed
it listens with a grin and one boot up on the rail
of possibility. It may have to leave the Earth.
Being roughly Christian, it scratches the other cheek
and thinks it unlikely. Though people have been shot for sprawl.
- Les Murray, “The Quality of Sprawl”.

The final exhibitions in Jonathan Smart’s High Street gallery (he will be relocating to Christchurch’s other fashion district Victoria-Carlton) are a couple of humdinger doozies, both by Ilam graduates known for beautiful, but mysterious work. In the rear gallery and into a back storage space I never knew existed (revealing the gallery to have once contained the offices of a Greyhound Racing Association), is a metastasising series of installations (or is that one big organic installation?) by Christchurch artist Robert Hood. The whole looks to have been put together from all that art that has been accreting in storage there over the years.

Does that make it a giant Duchampian gesture; a casual act of curation; a desperate act of archaeology; a half-arsed pragmatism? Hood’s installations are always matters of politely and poetically ordered chaos. The quality it has is ‘sprawl’, which the Australian poet Les Murray usefully defines as: “the man who cut down his Rolls-Royce / into a farm utility truck … doing your farming by aeroplane, roughly, / or driving a hitchhiker that extra hundred miles home. / It is the rococo of being your own still centre… Sprawl is never brutal / though it’s often intransigent…”

On one wall hangs a giant found banner, a group promotional image from the Gladiators television franchise (I was able to inform the artist that it was the British version, not the American or Australian one), their otherwise Colgate-smile muscular wholesomeness powerfully disfigured by the artist’s surgically generous removal of their eyes. Suddenly their humanity is gone and they become little more than grotesque, disfigured plastic corporate ciphers - which is probably the point.

Piled up in the middle of the space is a lot of work that had been stored in the gallery (oh, the magnificence of the Parekowhai photographs of KISS dolls; ah, the Judy Darraghs) an impenetrable mass of cultural jumble. Then again the pile could be one of Jonathan Smart’s little jokes - one can never tell with him.

There are also plenty of references to Hood’s obsession with the Kiwi obsession with motoring - the towering Babel of car tyres buttressing a wall, the delicately constructed box-weave of broken road markers (the latter presumably the leftovers from a fantastic installation at The Physics Room, which by rights should have gotten him nominated for the Walters Prize). Cars, and a love of cars are one of the symbols of egalitarian democracy and social levelling that Hood likes to play around with.

In the front gallery is a floor-based installation by the ever cryptographic Anton Parsons and Parsons doesn’t do sprawl. His work is as crisply tailored and laundered as a golfer’s trousers or hospital sheets. The floor is scattered (precisely and with the certezza and sprezzatura of studied indifference) with minimalist rectangular forms in red, blue, black and white - colours favoured by the purists of the Bauhaus and also incidentally highly symbolically charged in the New Zealand context: the colours of the New Zealand flag, the colours of the All Black jersey and silver fern.

These clean and sleek units are painted with calendar years, the numerals in that most cultish and immaculate of fonts Helvetica. Although Parsons likes to retain the coded and enigmatic qualities to his work, the years in fact relate to dates in the life of the late Tom Taylor, who mentored Parsons at Canterbury University’s School of Fine Arts. Parsons sees this work as both In Memoriam and as a kind of history painting. It is perhaps no surprise then that one of Parsons’ favourite artists is Japanese conceptualist On Kawara, well known for his painting the date every day.

The temporary closure of the Jonathan Smart Gallery is a dramatic event. Happily he will reopen in September this year.