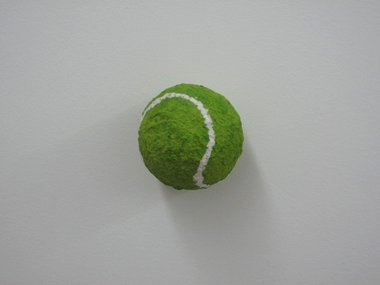 It is a tight conceptual package, with lots of cross referencing and repeated symbols mixed in with a lightness of touch and lack of physical weight

Jin Shiu is an artist from South Korea presenting an assortment of unusual videos, sculptures and wall works in room. Two of the three of the three videos are hard to follow but the rest is impressively consistent. It is a tight conceptual package, with lots of cross referencing and repeated symbols mixed in with a lightness of touch and lack of physical weight. When at times the work is ambiguous in intention, particularly when language is involved, you wonder if there has been a problem in nuances of translation, or his English, or a lapse in your own attention.

The dominant theme is that of objects floating free in the air, thrown (as with a boomerang, tennis ball, bone, or crumpled paper ‘Earths’) or driven (there is a photo of a flying saucer made of Chinese crockery) - as a means of escape form a repressive conformist society. There is a ubiquitous sense of yearning for liberation – particularly intellectual freedom.

With this metaphor of flight, suspension or ascension he often mixes in other layers. In Juggling, the paper pulp and coloured dyes used to make a tennis ball, bone and boomerang come from other artists’ catalogues and is motivated not I think by competitive glee, but by a symbolic blending of thought – a community ethos. The flying saucer is kept pinioned to the ground by a thin layer of balloon rubber, stretched tight over inverted Chinese bowls by five guy wires attached to ratchets. Jin Shiu has a real flair for poetic tropes, but this artwork has a fetishistic physical presence too.

Another related work consists of three images of a crumpled ball made from pieces of intensely coloured sellophane. It looks like Planet Earth moving comically vertically through space. The circles are repeated in an unusual work made using a scroll of bubble-wrap plastic, where the unravelled sheet extends out of its narrow crate and up to the ceiling. Shiu has invented a method of using the material to bear vertical texts, filling up the air bubbles with khaki-coloured Korean grass to render letters which you decipher in descending order. They read “Korean art is hopeful. Korean society is rotten. When society get rotten art gets on.”

The symbolic material (grass) seems to allude to the spreading of ideas about democracy - though it could be about a Korean diaspora. Nearby is a green circular print crammed with yellow horticultural tools, as well as a drawing made with the artist’s DNA loaded stitched hair, describing a strange word he has invented (“parentses”) about the genetic origins of his personality coming from both his biological and foster parents.

This is an understated, low key exhibition, that whilst not big on visual impact, has some intriguing projects nonetheless. Worth seeing next time you call in to ARTSPACE or the Film Archives.

Thank you Nick and Xin for the images.