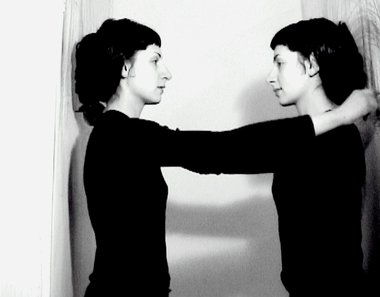 The profundity of the work is that these small deviations - and they are very small - highlight subtle differences in each personality in the form of slightly different timing, touch and confidence.

I am as guilty as the next person in often treating the Square 2 screens at City Gallery as entranceway eye candy. It’s partly the glare that bounces off the monitors during daylight hours that renders sustained viewing challenging and there is also the not insignificant issue of wind literally pushing you in to the more hermetic confines of the gallery foyer. While not the carefully sanitised environment we often expect for engaging with video, Square 2 has been quietly developing a more ambitious programme under the direction of Abby Cunnane and the recent work has warranted pushing through the discomfort barrier.

Melbourne-based curator Andrea Bell has put together a suite of works by Australian artists, including Gabriella and Silvana Mangano and Laresa Kosloff whose practices while based in video have strongly performative bases. While Kosloff’s work is yet to screen, there is a very interesting overlay of her quietly manic abstract sculptures invaded by human bodies with the Mangano sisters’ deceptively simple choreographed actions. Both involve the performance of acts in which the artist’s (Kosloff, hidden underneath her Ellsworth Kelly inspired costumes) are front and centre. What also connects these projects is the idea of performance as an activity heavily mediated by rules, guidelines and, crucially, constraints, leading to the staging of repetitive actions where there is a genuine tension between individual agency and instrumentality.

The Mangano sisters are twins who over a series of works since 2002 have investigated the im/possibilities of shared agency in the undertaking of certain tasks and gestures. Each work re-presents a basic setup of a stationary camera documenting in a completely straightforward way, their choreographed routines. In If…so…then, the sisters face off each other in a constrained corridor space. Dressed identically and with drawing implements in both hands they perform a series of movements that are part experimental dance, part gestural drawing and part adolescent girls’ playground game. The routine/process they enact is very compelling based on the curious symmetry of two ‘identical’ people mirroring each others action. Added to this is the fact that they are very good at seamlessly working together to make the routine flow. Very good but crucially, not perfect.

While it is easy to get lost in the rhythm of ducking, weaving and mark making, what is most interesting are the glitches, albeit small, in timing and movement. Undertaken in silence, the sisters watch each others actions with great concentration but like any synchronised activity small fissures of difference are continually woven into the system. The profundity of the work is that these small deviations - and they are very small - highlight subtle differences in each personality in the form of slightly different timing, touch and confidence. The sisterly dynamic is performed for us and it is fascinating catching the barest filaments of difference.

Falling Possibilities 2009 extends the investigation of choreographed action and drawing in space but with a more refined aesthetic. In this recent work the artists use a length of soft tape to move in and out of each other’s space almost as if they are weaving fabric. Unlike If…so…then which has a slightly gritty quality through its black and white, this work employs chiaroscuro for dramatic effect. While it does not play out the full suite of Baroque bells and whistles, the result is still suitably theatrical.

Yet in refining the aesthetic, the work is more formal and less psychologically tense than its predecessor. The ideas of shared decision making and Pollock-like gestural perfomativity are still there but it feels too refined. It is as if their increasingly honed working method has started to buff the rawer edges and they have at the same time become better at disguising the compelling idiosyncrasies prevalent in earlier pieces. Perhaps it is because they have a schtick, not a formula as such but a tight field of investigation that it is increasingly hard to unfold new layers. It will be interesting to see how they continue to explore what is a narrow but compelling premise for interrogating the idea of authorship.

Images are from top to bottom are from If…so…then (2009) and Falling Possibilities (2009). Courtesy the artists and City Gallery, Wellington.)