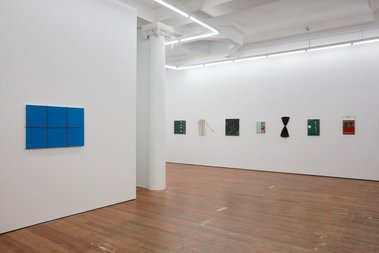 Perkins' delicately stained works cleverly utilise the discoveries of Lucio Fontana for a sort of internal stacking where one work contains another through engulfing slits. With this inserting aspect, they could be interpreted as a series of witty jokes about appropriation and internal absorption. Artworks ‘eating' other artworks, from the same or other artists.

In this show Oliver Perkins presents eleven of the formally innovative canvas works he is known for: playful attacks on rectangular stretcher conventions—domestic in scale and cheeky. Rich in humour, they delight in mutilating the mores of orthodox studio practice.

In this Lett display there are five types of support format:

(1) Two splayed fans of painted canvas, one inverted below the other—like a curtain pulled to one side and gathered at the ‘waist.’ A reflected, rippling scallop.

(2) Five splayed ‘fingers’, converging canvas-covered cardboard tubes, a linear formation spread out at the bottom. The buff colour has a hint of transparency.

(3) A canvas with painted bands and dowelling, suspended from the wall by a loop of coloured string at its top.

(4) Monochrome, sprayed or scumbled canvases with vertical slices into which another painted—more mottled—canvas has been inserted and firmly held. The corners of the inside canvases cause taut pressured traces on the outer enclosing fabric.

(5) Stained or monochrome rectangular canvas stretchers divided into quarters (or sixths) through pieces of wrapped around, coloured, tied cord. The opposing vectors of taut fine rope intersect in the middle. Perkins seems to be nodding to Support / Surfaces artists like Claude Viallat, Louis Cane and Daniel Dezeuze.

Some of these works seem like vague (small) homages to artists like Richard Smith, Ellsworth Kelly, Leon Polk Smith, and Jack Youngerman (who are famous for their explorations of shape and repetition). However instead of being flush with the wall, or using saturated monochromes, Perkins’ (usually) delicately stained works appear to cleverly utilise the discoveries of Lucio Fontana for a sort of internal stacking where one work contains another through engulfing slits. With this inserting, they could be interpreted as a series of witty jokes about appropriation and internal absorption. Artworks ‘eating’ other artworks, from the same or other artists.

In my view, one of the stars of Natasha Conland’s Necessary Distraction (2015), Perkins in that AAG exhibition showed his ease in making large works, so this Lett show really indicates only a sample of his talent. In this exhibition he characteristically uses three types of contrasting painted surface: unmodulated monochrome; stained unicolour; busy, ‘random,’ disconnected, multi-hued, dry-brushed marks on a white field. Occasionally large dominating white polka-dot circles are included.

The sliced canvases are probably the most conceptually interesting with their suggestion of art historical ingestion. However the ‘curtain’ work (Dora) and the tubular piece (Actant), thrill through the surprise they generate, being formally intriguing. They exploit the white gallery walls superbly. 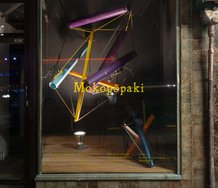