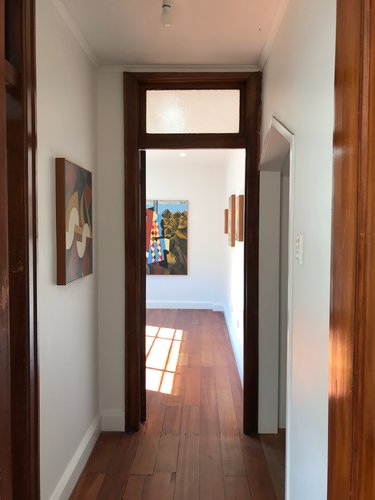 In the new paintings, Brown hones his palette with a burnt umber, red oxide and gold filter, suggesting a certain nostalgia for an early modernism typified by the likes of Sophie Tauber Arp, Max Ernst and Francis Picabia. Adding nods to primitive renaissance landscape, Rita Angus's treatment of sky and mountain, and a straight lift from what must be one of Picasso's rawest paintings, 'Harlequin' (1913), the artist re-aligns and begins the process of meddling with historical and geographical order.

In this second and finely formed exhibition of new paintings, John Brown continues an illuminating experiment based loosely on what are largely fictional and discredited theories of European / Asian / American travellers to Aotearoa via pre-Polynesian arrival. Even as a myth or tale, it is still an unnervingly fascinating prospect to imagine what and who may have wandered these lands—in what could be spoken of as a ‘prehistory’.

The current group of paintings dance quite differently from his earlier work. They touch more closely on species, fauna and landscape, staged as pictorial signs to construct what I would describe as a ‘speculative universe.’

In the new paintings, Brown hones his palette with a burnt umber, red oxide and gold filter, suggesting a certain nostalgia for an early modernism typified by the likes of Sophie Tauber Arp, Max Ernst and Francis Picabia. Adding nods to primitive renaissance landscape, Rita Angus’s treatment of sky and mountain, and a straight lift from what must be one of Picasso’s rawest paintings, Harlequin (1913), the artist re-aligns and begins the process of meddling with historical and geographical order.

Hung on the most eastern wall of the gallery, the largest painting in the show, The Protagonist, takes on the leading role of reminding the viewer that the artist isn’t taking this cacophony of references too seriously. In a way it decrees a mobilisation of all the paintings and their constituent parts. Hanging from a scaffolding pipe, this figure parades over a McCahon-esque landscape, while in the background the hills and mountains have been carved and quarried into some ancient settlement. The traditional harlequin pattern is both costume and landscape, and Brown here sensitively connects foreground with background planes, circulating the composition around the central pole. The smallest piece in the show, The Protagonist and Fabricator, is the study for the larger work, an example of how successful a preliminary piece can be, and—in this case, I felt—particularly useful.

Brown has spoken of how he wants to give the paintings a sensation of not being new, of having degrees of nostalgia, and an ability to reach back into the past as an ongoing way of re-informing his practice. The small two-roomed gallery, built after the earthquake in 1931, becomes an ideal home for these ‘period’ works. Originally an office and a ‘smoko’ room upstairs above a garage, the dark timber joinery and concrete surfaces link into the frames around the paintings, highlighting the darker hues, and intensifying the more primary palette. The blend of geometry and colour, with a bricolaged surrealism, seems natural to the artist’s thinking.

In the work Shifting Sands, Brown counterpoints blocs of cascading architecture with aviation. To me it felt i was looking at a craft from those farcical 1960’s films, Those Magnificent Men in their Flying Machines or Leonardo da Vinci’s drawings, or even Chitty Chitty Bang Bang. The flimsy wings are finely comical, and just purposeful enough to allow the loosely connected elements to fly.

In another work that had instant appeal, Venus the Traveller, roughly based on the story  around The Birth of Venus, voluptuous diamond shaped tiki heads jostle with the goddess and her modesty veil. The flickering light and the repeating characters create a sense of delight and humour. I was reminded of the dancing buckets and brooms in Walt Disney’s 1940 film, Fantasia— here the soundtrack and choreography combined in a unique sort of rhythmic narrative. This painting, along with the work The Golden Jandal, with its dark lit jade background and orbital clunk, gives me the feeling that the artist has begun to synthesize the means by which his practice can continue to travel.

I know full well how the light, atmosphere and geography here on the East Coast of the North Island can affect how one builds images. Sky, stone, dirt, hill, range bush and river seep and infuse into Brown’s paint, and the characters that he invents and borrows are strangely connected to his location here. This exhibition was a pleasure to attend and consider.