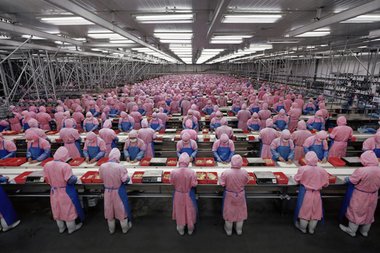 Living now in an alarming era where the world is globally trying to come to terms with the tragic consequences of Covid-19 and (in the US especially) post-emancipation racism, this sprawling exhibition with its eight ‘sociological' categories—hive; alonetogether; flow; persuasion; control; rupture; escape; next—reminds us of just how difficult it is to predict the future. We are clearly living in a different (even more stressed) epoch now from when this show was initially produced.

Curated by William A. Ewing and Holly Roussell, co-ordinated with advice from Ron Brownson

Produced by National Museum of Modern and Contemporary Art, Seoul, and the Foundation for the Exhibition of Photography, Minneapolis & Lausanne.

Recently, when I was dropping a truckload of post-lockdown books off at my local library, I was lucky enough to spot a copy of the large book (with a different title: Civilization: The Way We Live Now) that accompanies this show. It made me dead keen to visit AAG, to see how the photographs looked as objects in the institutional space (their size and mass), and how the different curatorial themes (based on 21st century crisis-points for urban living) were set out. And how the images were juxtaposed and sequenced, with their details enlarged, when encountered face to face.

AAG is the fourth port of call for this huge touring show, with much of the gallery’s first level divided up into a winding but intimate maze of sixteen rooms, presenting surprisingly even then only 60% of the total work list. (Check the book out in the shop to see some of what they couldn’t fit in.)

Living now in an alarming era where the world is globally trying to come to terms with the tragic consequences of Covid-19 and (in the US especially) post-emancipation racism, this sprawling exhibition with its eight ‘sociological’ categories—hive; alonetogether; flow; persuasion; control; rupture; escape; next--reminds us of just how difficult it is to predict the future. We are clearly living in a different (even more stressed) epoch now from when this show was initially produced. As is stated in this radio interview with one of the curators.

At one stage I wondered if this show might be a classier variation of Magnum, but the first room (an introduction), with one massive work occupying a whole wall, sets out clearly the difference. Yet these are not illustrations for news stories, or forms of photo journalism. Although they are rich in narrative content many are also very formal (especially the aerial shots), and part of their meaning lies in that geometric or symmetrical fact. Scale and compositional nuances provide emotional impetus. As does digital technology in some that have collage effects, or graphic effects akin to drawing. Others gain their power collectively, being family suites of closely connected (often sinister) images.

However, you could I think argue that the themes are too broad, so broad as to be meaningless, and in fact why bother. For Rupture, for example, what was yesterday’s conflicts over migration and nationalism is today’s police racism and global Covid catastrophe—and that perhaps there is little difference anyway.

What is certain is that there are plenty of disturbingly haunting and beautiful images here—some both and others not. Military technology, urban advertising and high-rise architecture play key roles, while some very current themes like (for example) demonstrations of LGBTQ+ assertiveness, are surprisingly under-represented, if not invisible.

Nevertheless, this is a fantastic show for wandering back and forth between sections over the course of several hours, firstly so that you can make a list of your own favourite photographers and heart-stopping images—to enable you to research them further online at home—secondly to make your own thematic categories to ponder at leisure, and thirdly to assess how well the two New Zealanders included (Neil Pardington and Chris Corson-Scott) fit in. Beautifully hung, the exhibition is unabashedly about spectacle, and visual pleasure that can lead to a more succinct political, global and technological awareness.