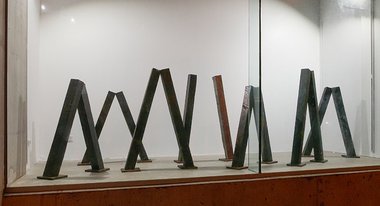 'Two Oceans at Once' examines the politics of naming, representation:-especially of the elements within the world we interact with—of ourselves and the communities we are part of—and of course others too. With its selection of nine artists it is a mixed bag of a show, but much improved with an organisational reshuffle (and change of some contributions) in the last fortnight.

We have here with Two Oceans at Once a clever title that references Auckland’s geographic relationship to the Tasman Sea and the South Pacific Ocean as a parallel with that of Panama and its relation to the Pacific and the Atlantic Oceans—but accompanied by the eloquent writing of Uruguayan writer Eduardo Galeano on the politics of naming. It looks at representation—especially of the elements within the world we interact with—of ourselves and the communities we are part of, and of course others too. With its selection of nine artists it is a mixed bag of a show, but much improved with an organisational reshuffle (and change of some contributions) in the last fortnight.

Yonel Watene had what (to me) seemed a disproportionately large number of works in the show, some of which were placed in clusters on the floor in a casual fashion and left for the visitor to decipher, using the worklist and accompanying essay. However the new work—Hongi—in the streetfront windowed gallery (with crucial wall label) is much more engaging. Pairs of tilted oiled beams that lean into each other (hints of di Suvero) so they connect at the top, and made of Macrocapa, Pine, Ash, Kauri, Tawa and Redwood, look like abstracted standing figures, greeting each other in the traditional Māori manner.

In the label Watene writes of his father having a particular enthusiasm for introducing this protocol to all non-Māori he met, even strangers he came across in the street or carpark. His cultural pride and infectious friendliness made the spontaneous (and educative) cross-cultural greeting memorable.

Curiously Ayesha Green’s contribution to the Nigel Borell-curated show, Living Portraits: Mata Raurangi, down the road at AAG is far superior to what she contributes to Two Oceans. Her vinyl images on glass here of her small cousins dressing up, have a Disneyesque sugariness, akin to Snow White, and not really as the curators fancifully claim: “an equal reference to Maori carving as it does to stained glass,,,” The Mata Raurangi paintings in contrast have gravitas and elegance, avoiding all sweetness, that makes you sit up. I had never taken her work seriously before (compositionally too ordinary) but the St Paul St works (their kindergarten tone) reinforce that resistance.

Ruth Ige’s mock ‘expressive’ abstractions are simplified (clothed) figure studies of people in the black community interacting, but with their faces ‘blacked’ out and—apart from their ombre colour-featureless in their physiognomy. Carefully tonally controlled and limited in their selection of chroma (mainly blue or ‘grey’), some of Ige’s paintings are idiotically positioned on blue walls which undermine her compositional skills. Never mind; there are a lot of her works elsewhere.

Conceptually this artist is mining a field opened up by the satirist Robert Colescott—and in Australia (but more about class than race) Tony Garifalakis—with her obliterated oval coal-black visages that seem a comment on invisibility and hostile blanket racial generalisations. Her work avoids humour and the politics is subtle, for they would be taken for moody land or seascapes if the corporeal elements were not verbally elucidated.

Jane Chang Mi’s sensitive pencil drawings of documentary photographs in Gallery Two—taken in connection with the 1946-62 American atomic bomb tests on Bikini Atoll—are the highlight of the exhibition. There is a suite of thirteen images of pre-test village life on the Atoll, and five of them have added written comments on the photograph backs-all carefully drawn by Mi on eighteen sheets. Adjacent to these are a large Nautical Chart of the Atoll and a map showing the Cactus Dome—a massive concrete ‘inverted saucer‘ placed over the nuclear crater.

Also in Gallery One is Mi’s long ongoing translation of the Antarctic Treaty (1959), winding around a blue freestanding wall and about eighty pages long. The introduction and original articles of environmental protection are in English, French, Spanish, Norwegian and Russia, and so far Mi has added versions in Māori and Hawaiian. At least seven namings of the ecologically vulnerable continent.

Talia Smith’s contribution is a nine minute, two channelled video examining the qualities of light in Auckland and Sydney when sunset is approaching. Made with her mother, the format is split-screen, filmed via iPhone or Samsung Mobile, each side running through five sites over five consecutive days (bumpily moving through urban and rural landscapes), the set sequences using unpredictable durations-all as the flickering light in different meteorological conditions gradually dims.