Shim and Child in Timaru 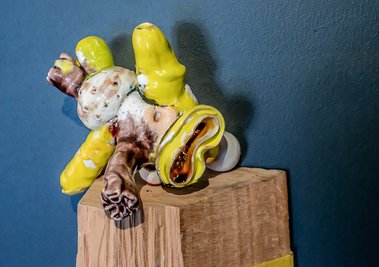 Child brings her own puckish wit and an anarchic sensibility, tuning into the most popular themes and forms in netsuke—nature, eroticism (there are an awful lot of pink phallic and vulvic forms) and humourous caprice. It's very clever and beautiful, and again manages to work on multiple levels in a way that appeals to a very diverse audience. I love their expression of joy in the materiality and plasticity of clay, and the obvious fun they have with colour and texture.

Madeleine Child
Neither Fish, Nor Flesh, Nor Good Red Herring
Until 28 April 2019

Let us salute our regional galleries holding the fort for the visual arts in the provinces.

I was recently in Timaru and, as I always do, took time to visit the Aigantighe Art Gallery, which remains special to me as the place that first whetted my love of the visual arts and sent me on the rather dubious lifepath that ends up here—wherever that is. (The name is actually easy enough to pronounce, despite appearances. I always remember it as “egg on tie”—Scots Gaelic for “at home”.) The gallery name is taken from the elegant Edwardian manse built in 1908 as the retirement home of Alexander and Helen Grant, Scottish immigrants and formerly of Gray’s Hill Station in the Mackenzie Country. When Mrs Grant passed away in 1955 aged 101, as per her wishes the house was donated to Timaru as an art gallery.

Unfortunately the part of the gallery that was in the original house is closed to the public for ongoing structural assessment (a familiar enough situation around post-Canterbury quake Aotearoa), but the modern foyer and gallery extension are still being put to good use. I’m pleased to see the boat being pushed out beyond the realm of the comfortable and safe, the local and worthy duty to community projects. That’s not to cast shade on local art and community projects—I’m emphatic supporters of both—but even the regions need some extra stimulus to cultivate their audience’s expectations.

Hanna Shim‘s SMER SMER (스멀스멀) takes its name from an onomatopoeic expression in Korean for “slowly growing/approaching” from the sound of a bug inching along. Seoul-born Shim is an Auckland-based artist working across a wide range of media with a focus on handmaking and the unheimlich counterpoint of the cute, kitschy, childlike and playful with a sinister undertone that elevates it from being mere aegyo (애교) pop art to something altogether more psychological.

In this show Shim, working in textiles and stuffed, oversized, soft toy-like forms, brings together undeniably cutesy storybook elements of giant flowers and rainbows—still possessing their own surrealistic, psychedelic qualities mixed with childhood nostalgia—and black insectile shapes that are just ambiguous enough to tickle your entomophobia, but stand alone as biomorphic formal objects. These are particularly effective in the dim downlighting, mapping out an otherwise nondescript hall-like space and getting some wonderful synergy from the reflective floor.

SMER SMER is not as ambitious as the installations of say that of Mike Kelley in terms of what it’s prepared to put the viewer through, but it’s definitely in that neighbourhood, with a distinctly East Asian pop aesthetic underpinning it, and far more accessible in engaging with a more casual audience. The art world cadences are a slow burn. Something that can manage to appeal to a range of people from me to small children is smart programming.

In the foyer is Madeleine Child’s Neither Fish, Nor Flesh, Nor Good Red Herring: more traditional in display using plinths, but just as surreal and fun. I am a big fan of this New Zealand ceramicist. There are few things as enchanting as Child’s signature popcorn-inspired works. The work in this show, as the name suggests, eschews direct mimesis for difficult to define chimera with references to Japanese netsuke (根付)—the little sculptures invented in the 17th century to act as toggles to attach pouches and other accoutrements to kimono and kisode. Over time these evolved from the utilitarian to elaborate artworks in their own right (made widely famous in the West by Edmund de Waal’s 2010 memoir The Hare with Amber Eyes).

Child’s sculptures evoke the structural complexity of those later manifestations, to which she brings her own puckish wit and an anarchic sensibility, tuning into the most popular themes and forms in netsuke—nature, eroticism (there are an awful lot of pink phallic and vulvic forms) and humourous caprice. It’s very clever and beautiful, and again manages to work on multiple levels in a way that appeals to a very diverse audience. I love their expression of joy in the materiality and plasticity of clay, and the obvious fun they have with colour and texture. They take risks, which only become apparent on close inspection.

As a side note, the title is a very old expression, first recorded in John Heywood’s 1546 glossary, A dialogue conteinyng the nomber in effect of all the prouerbes in the Englishe tongue as “She is nother fyshe nor fleshe, nor good red hearing”. Originally it meant “to cover all eventualities” because the clergy ate fish, the rich and aristocracy ate flesh, and the poor ate smoked herring. However through uncertain linguistic processes it has come to mean to deliberately distract or mislead, resulting in the modern expression “red herring”. Both meanings are apt of these tricky little works. Bravo!