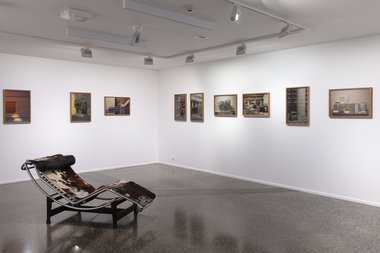 In his twelve images, each framed tightly, simply and austerely with stained wood, Hartnett is a bit like Sherlock Holmes, using his eagle eye to seek out clues or forensic traces of the behaviour of absent users or staff, scrutinising each scene for material evidence of how the space functioned, looking for details—explained in the image titles which talk of bodily traces—most of us would miss.

At Objectspace well known professional photographer and artist, Sam Hartnett, is presenting a dozen images of the three Auckland University specialist libraries about to be closed by the university administration (despite much astonished indignation from the students and staff) to avoid paying salaries to the 45 librarians needed full-time to run them. For most art, architecture, music and dance devotees, that librarians can be so undervalued in a place putatively devoted to higher learning is incomprehensible.

The show’s title, Ex Libris, comes from those ornate book plates found in old fashioned books where the owner of the book has their name stated, so borrowers don’t forget to return it. In the context of the show it now refers to community ownership.

The very informative texts discuss the design and planning of the three libraries, and also some theories of architecture and furniture pertaining to libraries in general. There will be a tour of the lending spaces next week.

In his Objectspace presentation, Hartnett has not segregated his dozen images into three camps, based on the architecturally designed libraries concerned, that are part of the Elam School of Fine Arts, the School of Music and Dance, and the School of Architecture and Planning—something you might expect. I was rather hoping he would, because I am curious—I’ve only visited the Elam Fine Arts library about three times (it was too expensive for me to join, my alma mater being Canterbury), and I’ve never entered the other two. However, I can see why he has not sorted them into locational groups. It is a gesture of political solidarity, a mark of unifying empathy—to blend the three together.

In his twelve images, each framed tightly, simply and austerely with stained wood, Hartnett is a bit like Sherlock Holmes, using his eagle eye to seek out clues or forensic traces of the behaviour of absent users or staff, scrutinising each scene for material evidence of how the space functioned, looking for details—explained in the image titles which talk of bodily traces—most of us would miss: observational things like fingernail scratchmarks inside the handles of wooden swing doors, a worn hole in the carpet underneath a librarian’s desk, lunchtime breadcrumbs lying on a grey lino floor, a water stain from a constantly overfilled pot plant, or exposed underfelt at the edge of some shifting, poorly fitted, carpet.

In the centre of the gallery is a LC4 Chaise Longue, designed by Le Corbusier in 1928 for reclining on for rest or reading, and reproduced by Cassina since 1965. This one, covered with a Hereford cow hide, Has been a permanent fixture in the Architecture and Planning Library for 35 years, donated by the appreciative student organisers of the Gone to Kiwi, Oceanic Architecture Student Congress of 1983. It was gifted so students could use it, and they have.

Anna Miles and Lucy Treep, the editors of the publication, have incorporated this piece of furniture (and its story) in Hartnett’s show, Treep being the author of a short article about it in the book. Its sculptural presence in the gallery is a nice touch. A refreshing foil (of gratitude) to the dominant tale of bureaucratic idiocy and ignorance.