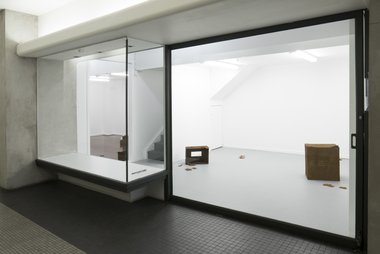 So what do you do when care and hate feel like the same thing? Stand back and announce it has been claimed (though only through the floor sheet) as an art work because you wanted to kill that version of yourself that was made and expected in relation to others and how things have existed before.

People are nervous and they should be. With this opening, the artist has suddenly outmoded them. It can happen to anybody at any moment in New York, and always does. It doesn’t matter. But what is it that strikes you as being so decisive in this new blow? Not only has he repackaged your world, he did it without putting anything new into the package. This is not as easy as it looks. He outmoded you by ignoring your attachment to content, by reminding you that the format is the message. He out-formatted you and now you are getting the message.

After returning from a trip to Paris and feeling a need for the city, a real city that almost feels like the rest of the world. The gallery must move ‘back’—seemingly regressive of the context of ‘artist galleries’—down town and away from everyone else. Sometimes it seems right to return to ‘the start’ in order to get away from where frustration lies with the scene everyone is grinding in. These times are so different to the times before and sometimes you just have to make different choices. Working in response to this tension New/Content by Jerome Ngan-Kee becomes the final show at Mercy Pictures 214 Karangahape Road location.

You won’t find anyone there to talk to when you visit Mercy Pictures during its ‘open hours’. The bored artists playing gallery minders won’t be waiting around upstairs for their shift to be over. The gallery is locked. It is closed while it is open. The lights are left on until the last week’s rent is to be paid on the lease (31.12). Soon it is all to be handed back over to the agent where they wait to see what will happen next. You can only see inside through the closed glass doors. Everything is perfectly clean except for a grubby plastic brochure holder that is mounted to the wall, the only thing outside the gallery, holding the works list where you are given the titles of 8 works. Heavy leaves blown through cardboard boxes are the only things occupying the gallery space making the show half object / half gesture.

The leaves and boxes seem to be made from rusting metal: a quick and easy reference to urban decay left up to the viewer to decide how and what these sculptures are made of—all heavy and sad—soaked in that unwanted feeling objects seem to have when they are just left on the street. Left behind. These sculptures are not pregnant, they are bait. For corrosion starts to happen when things stay still too long. Maybe something was good and interesting for a moment, but trying so hard to hold onto it, you start losing it. What does it say about you to assume they are really a [Cast Object]?

Some people are attracted to this kind of mistrust. Love, Care and Hate. You get pulled in and you still cannot get close enough to figure it out. Does rust form between the object and its exposure to what is outside? Making rust the relationship between the thing and its exterior? Or is rust the experience? There are very few firm clues in the titles. Acting the same as the rumours formed when a young group of artists belong to gallery for a year. Acting out and breaking up isn’t this what it is all about.

That said, we (the other 5 ‘gallerists’) are all locked out now. The gallery is no longer ‘ours’. Maybe it never was. Jerome has used the gallery keys to create DIY “Lock Jammers”. When broken the same object that grants you access becomes the very thing that can lock everyone, including the artist, out. I love this form of change: apply some pressure and things will break. Maybe it was what was needed all along.

This is the second time a Mercy artist has used gallery keys for an art work. Ronan Lee made copies of his key available in his show ‘K Road Paintings’ earlier this year: offering access in the future to anyone that could afford the purchasing fee. Keys for anyone… I have been told that Dan Arps made gallery key works during the Gambia days. A common self-reflexive move that seems to come with being the ‘bad boy intellectuals’ that exist in these types of groups. But who wears it better?…Jerome’s 2019 (Host) is a gesture of strike that could only form after reaching a certain personal and collective limit.

Maybe it is because he used to live there, secretly, above the gallery to help cover the rent. To sacrifice oneself for a collective gallery isn’t a new story, but Jerome’s lock jamming gesture does create an internal break for ‘us’ at Mercy Pictures: it presents this previously lived private phase as a concept. As the internal relations of an art scene turns sour Jerome creates a situation where he can be blamed, and by keeping everyone at a distance on the outside looking in the entire gallery can become an abstraction.

The gallery needed to be restored any way, the labour that comes with installing and deinstalling shows was not an exception for the interval before this show. 2019 (KYS) is the restored gallery space. Artists are always finding ways to produce meaning with doing as little work as possible. The space was to be restored by the other members, but Jerome chose not to help. This sudden shift in attitude (becoming an artist) appeared arrogant to the collective context but he stayed committed through the negative responses.

See what happens when we abandon the positions we hold now? As we had no idea of the planned art work until it was complete, the change in behaviour bought on the feeling of being subjected to the position of interning gallery assistants and an artist as producer. But by trying to make a break in the way production usually plays out, was he trying to show another perspective on what produces us? To produce the present doesn’t produce the future and this change in behaviour changed the whole perception of what we were doing and what we were doing it for. So what do you do when care and hate feel like the same thing? Stand back and announce it has been claimed (though only through the floor sheet) as an art work—because you wanted to kill that version of yourself that was made and expected in relation to others, and how things have existed before.

If 2019 (KYS) as an artwork is the experience, then 2019 (Perception to Emotion) is the representation of these thoughts operating from inside the limits of its own presence. Being put to work and turned off at the same time. The use of gallery lighting power functions as an action of labour that is payed for during the strike. And only when the strike is over is the work finished. The power usage is a countdown to the end of the year and the end of space. Only when something is over can you imagine whatever else. Through this implied disconnection we can then aim for whatever else. But an aim for what? What of the future? What’s yet to come? A move to change the present state of things also becomes a move to define or describe the present state of things. The work will have little effect on any given situation but it might insist on the possibility of bringing about changes in perception concerning the reality that is taken as a given.

You kind of want to become an Artist who is self-writing, who already narrates their own emergence and disappearance—at least until the story is taken up and repeated in the work of others. By the usual gallery entrance is a generic wall mount brochure holder, 2019 (Trepan). Jerome stole it from the University’s Window Gallery: a gallery where he had heard an artist had proposed to the experience-seeking curators the removal of said holder for an exhibition, only to have a negative response. Hearing this story, and acting without the need for permission, Jerome performs the only role he has subtly but all too well developed: he steals the holder; and then titles this work after a hole saw used by surgeons to release pressure built up in a skull.

Window was to open its final show of the year the night after Jerome’s opening. Whether this move was good or bad at least something was happening. This something was in relation to its context. This something is what we might be missing in the urgency underpinning our making art, galleries and criticisms. If people get worked up by the art work then isn’t that good? Isn’t that working?

We tap into these stories of people before us, transforming nothing; they do not progress, only recycle their own revolutions. Eroding and splitting the identity they wish to live out; producing only missed encounters with endless substitutions; a corrosive deviant movement that only moves itself. They work and they don’t work. A press release held by the arms of another gallery set up to give the emerging their experience. The artist producing production and presenting it itself. Images and ideas of these, like it or not, are ethical prepositions. Because ready-mades can also be unmade, right?