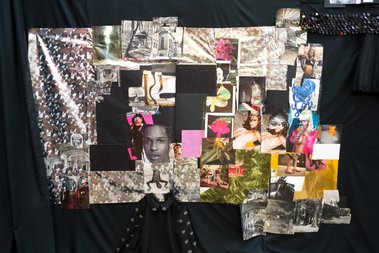 One of the finalists in the impending 2018 Walters Prize exhibition (she was also a finalist in the 2004 line up), Jacqueline Fraser at Lett presents a show quite different from her Shout Whisper Wail contribution of a year ago at AAG.

In the large, street-level gallery space, the work is more sprawling, with greater collage emphasis, less saturated colour, and no sound or moving image at all. The collages require prolonged scrutiny so that close proximity is elevated over a long distance appraisal, where overall spatially—despite the black, orange and organza grey fabrics hung over the walls and windows, ‘smiley’ yellow balloons on the floor and suspended walk-through cylinders of golden streamers—it is less intimate.

The exhibition’s title references the 1982 film Carbon Copy made by Michael Schultz, that stars Denzel Washington in his first lead role, playing the part of a young black man who tracks down his hitherto paternally unaware white father. The title punningly introduces obvious allusions to ethnicity and racism, plus it suggests themes like the growth from child to adult, the generation gap, the transmission of values from parent to child—and the responsibilities of parenthood.

Fraser’s spontaneous collages, with their torn edges, emphasis on process and composite human forms, utilise mostly the pages of fashion magazines, with the occasional art reference (usually Warhol) thrown in, and pieces of gorgeously decorative cloth. Some of the orchestrated juxtapositions are organised in suites of identically sized portable panels based on canvas stretchers covered with black paper. Taking the show’s title as a cue, especially the theme of parents watching their children’s evolution into adulthood, we see images of suave young black men with well filled ‘lunch-boxes,’ sometimes looking admiringly into mirrors—or the occasional skimpily clad woman—interspersed with patterned papers, exotic birds, tropical flowers, luxury fashion accoutrements and historic architectural settings.

The ‘emergence’ theme is organically mixed with surrealist improvisation and Warholian voyeurism / sycophancy. The dominant dark paper gives the fragmented images a flickering filmic feel while the shimmering streamers descending from Lett’s distinctively sculptural roof add an exuberant theatricality. This is a complex show—less visceral and immediate than usual (because of the gallery size)—but making up for it with greater nuance via shrewd image juxtaposition.