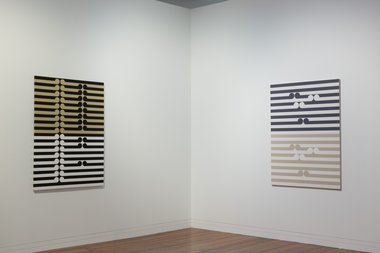 Perhaps if he had he kept going he may not have eventually arrived at this essential arrangement of point and line; however he did get from the koru what he needed to make the final conceptual and practical leap—a tension in the relationship of shape and tension in the relationship of colour. Walters found here a visual language that worked, could say what he wanted to say, and within a local context offer a viable response to the post-war abstraction he had encountered in Europe.

“I believe that dynamic relations are most clearly expressed by the repetition of a few simple elements.” Gordon Walters, 1966.

These words greet the visitor upon entry into Gordon Walters: New Vision at Dunedin Public Art Gallery, laying down a cogent manifesto for Walters’ five-decade long practice of rigorous investigation into the fundamental language of images. Occupying the entire first floor of the gallery, this triumvirate curated exhibition offers an encompassing survey of Walters work—from the research and methods that lead to the iconic ‘koru paintings’ to the divergent paths of further exploration he took in deconstructing the form/field relationship of his images. The show echoes the arc of Walters’ career returning rhythmically to the black and white koru, the work that would guarantee him a central place in the story of New Zealand modernism.

Claiming his use of the motif was a response to place, Walters‘ ambivalently utilitarian appropriation is so quintessentially Kiwi we really should have one as a flag. Post-colonial cultural infelicities aside, Walters continually reiterated that his fascination with the koru was purely a graphic one, and it worked. This was the breakthrough that dynamic relationships could exist within the painted form itself as well as between the placement of individual forms upon the picture plane. The inspiration of the koru introduced the circular Walters’ motif which up until this time had mainly dealt with rectangular abstractions. There is an inevitability to this outcome, that adopting the koru form was a short-cut on the path he was following to reduce the picture to its fundamental components.

Perhaps if he had he kept going he may not have eventually arrived at this essential arrangement of point and line; however he did get from the koru what he needed to make the final conceptual and practical leap—a tension in the relationship of shape and tension in the relationship of colour. Walters found here a visual language that worked, could say what he wanted to say, and within a local context offer a viable response to the post-war abstraction he had encountered in Europe.

The exhibition is arranged through six spaces, each presenting a distinct thematic cluster of works around a particular phase or working mode in Walters’ career. The first room begins the narrative in media res with work representing the watershed show at Auckland’s New Vision Gallery in 1966. This was the viewing public’s first introduction to the koru works that Walters had held back from exhibition for two years.

Notably the first piece one encounters is Te Whiti (1964) with an accompanying preparatory study. Walters first completed work in this style followed a decade of experimentation with the motif through drawing and gouaches, though here he is still attempting to place the form upon the field. The black and white motif occupies the top two-thirds of the painting, devolving into or rising from a solid ground of black at the bottom. This sombre field of Malevich black gives the work a strong psychological anchor, lending an air of solemnity that resonates with a reverence seemingly invoked by the title Te Whiti. However, that this work names both the spiritual leader and the street Walters grew up on establishes at the outset the air of ambivalence and ambiguity that haunts his pursuit of a purely visual expression.

From here the second and third spaces jump the chronology back addressing Walters’ formative years as an artist attempting to access contemporary currents of western painting from our distant corner of the world map. Here we find representative samples of student work, early experiments and forays into a thoroughly modernist explosion of the image. Woven into this period is Walters’ budding friendship with Theo Schoon, whose firsthand experience of European art and fascination with Māori rock art would be a foundational influence on his life-long practice.

These early forays channel into the notable series of gouaches made in the 1950s when Walters was employed at the Government Printing Office in Wellington, after spending time in Australia and Europe. A conceptual and aesthetic link between the fledgling artist and the conversant master, the small bold geometric abstracts have Walters very patiently attempting to internalise the experimental modalities that had exploded the notion of the mimetic picture-image in the first half of the twentieth century. Small, colourful, rectilinear compositions dance in a sequence along the wall; each testing how formal elements can be arranged in the picture plane. These are works of particular labour, earnest in their fumbles to practise and get it right.

A selection of primary materials: preparatory drawings, photographs, influential works by outsider artist Rolfe Hattaway, provide a deeper context for Walters’ thought processes, intellectual environment, and immediate visual culture. His relationship with Schoon expands, and included here are some Schoon’s photography of rock art leading towards the apotheosis of the koru. However, given the apparent intensity of influential interplay between the two artists, examples of Schoon’s work are somewhat scant. Although the work presented here is a contextual sample, a slightly wider net and a deeper focus on this relationship could have proved even more rewarding for this exhibition.

This cycle of works dovetails into the 1960s as the colour begins to strip from Walters’ palette, while he still wrestles with rectangular forms in search of that personal motif that will concretise his practice. It is really the move to a disciplined monochrome as much as the genius appropriation of curve/angle interplay that shows as the apotheosis of Walters’ career here. The wonderfully calm black and white rectangles of 1967’s Oriental illustrate where the lessons of the New Vision work are brought back to the subject of his lonely 1950s experiments. The painting serves a hinge between the two wings of the gallery, from where the rest of the show seems to explode triumphantly—and perhaps a little messily—in celebration of the second half of Walters’ career.

The later oeuvre is approached in two streams, the first of which consists of a room of the most optically charged work. These paintings are the strongest presentation of Walters’ notions of dynamic repetition; built on tried and true methods of equal positive and negative space comprise straight lines and curved forms.

The koru motif is heavily represented here with experiments in colour, though never more than two distinct, if muted, hues. Other variations in geometries emerge in various oblique or un-titled works, but it is the blurring of graphic relationships through incessant repetition that unites these pieces and draws the gaze relentlessly around the room.

All of these large optically charged works in one space can begin to overwhelm, appearing to shimmer at the edge of vision—the eye’s movement through the field of any particular painting can be disrupted by a peripheral noise. Ultimately one must surrender to the fluid optical experience, and the encounter with these works becomes a strangely Zen-like rollercoaster.

Less visually and more conceptually heavy, the final thread of the exhibition brings together Walters’ ongoing visual experiments beyond the optical fluidity of the pattern based works. These attempts search deeper into the function of the pictures, beyond the confident and established solutions he had already discovered and woven into his practice, resulting in a dissected, almost desiccated minimalism. A coy existential brutalism undermines the lyrical compositions of Walters’ middle career. There is a coldness in the slabs of grey that dominate this work, a quality of resignation that is typical of an artist’s late work. It is a recognition that the ultimate answer will always be elusive, and that each resolution is only precondition for the next task. This coda, however, also reveals Walters’ ceaseless spirit and relentless drive, his refusal to be satisfied with even hard-won solutions.

On the repeated viewings the complexity of Walters’ practice reveals itself through pared back layers, cycles of investigation and reduction of form, like a spiralling descent into minimalism. The overall trajectory of his critical process shifts like the field of an individual work, each new revelation occurring with a natural inevitability that belies the hard work at the heart of the matter. New Vision is a fitting testament to a man who made pictures as perplexing as he himself found them to be. 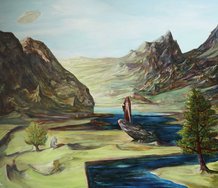 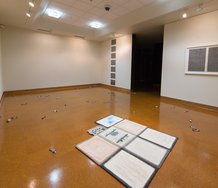 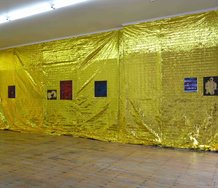 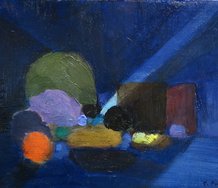