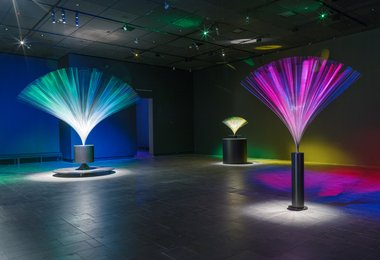 To look at a Len Lye 'Fountain' is to think inescapably of those novelty fibre optic lamps that enjoyed a vogue in the psychedelic ‘60s and over-sexed ‘70s, and as ironic kitsch in the ‘80s. There is a similar turning and swirling kinetic motion, a similar play of coloured light, though in this case on a far grander scale with projection onto steel rods instead of through optic fibres. The main difference is, of course, that Lye kinetic sculptures always carry with them a genuine sense of menace and danger along with the wonder—if you got too close they could hurt you.

Oh, I admit it. I used to be a Len Lye sceptic—it all seemed a bit cultish to me, but then I eventually came around to his charms. There is something entirely appropriate about Len Lye: Stopped Short by Wonder being a Christchurch Art Gallery event, in collaboration with the Len Lye Foundation and the Govett-Brewster Art Gallery/Len Lye Centre, New Plymouth.

Lye was, of course, Christchurch born in 1901 and raised (the story about kicking around the kerosene can on Manchester Street while his father lay dying has been repeated ad nauseam), but there is also the strong connection to the University of Canterbury’s School of Engineering. The title is taken from something Lye wrote about the childhood epiphany with that can. “We’re all stopped short by wonder sometimes and that’s when it first stopped me in its tracks.”

The rest of the story is pretty well known; he went out into the big wide world early on—Australia and Samoa, then on to London where his exoticness drew him into the circle of Robert Graves and Laura Riding, with them to Mallorca, and eventually to the United States just as New York was getting into its stride as the imperial centre of the Western art world.

One of the best things in the show is the highly informative and detailed introductory section, which discusses Lye’s experimental filmmaking, painting and scratching directly on to the film offcuts given to him by friends at London’s Ealing Studios, and shows some of his rarely-seen paintings, photograms and book cover designs, contextualising them against Lye’s interest in indigenous cultures (though the politics of that have yet to be fully addressed) and belief that creativity comes out of the primitive “old brain” rather than the “new brain” of civilisation that overlays it.

This section, while probably the part most people will rush through to get to the main event, deserves a slow meander of serious contemplation. It’s also nice to see a good selection of the film works being shown, either on monitors here or projected at a decent size in one of the other gallery spaces (thank you Ngā Taonga Sound & Vision).

Of course, the big draw-card is the kinetic works, the things that rattle and go bong due to the mysterious happenings of their hidden motors. Everyone loves these, which is an understandable and important consideration when putting together a public programme. Most of them were conceived of in the 1960s and ‘70s, and reimagined in the 1990s. I do wonder, however, if three of Lye’s Fountain works—four, if you count the more fabulous and frenetic Fire Bush, which I do—might be overkill.

To look at a Len Lye Fountain is to think inescapably of those novelty fibre optic lamps that enjoyed a vogue in the psychedelic ‘60s and over-sexed ‘70s, and as ironic kitsch in the ‘80s. There is a similar turning and swirling kinetic motion, a similar play of coloured light, though in this case on a far grander scale with projection onto steel rods instead of through optic fibres. The main difference is, of course, that Lye kinetic sculptures always carry with them a genuine sense of menace and danger along with the wonder—if you got too close they could hurt you.

The CAG exhibition is the largest single exhibition of Lye’s work ever put on in New Zealand, not least because the Len Lye Centre in New Plymouth simply doesn’t have the space and resources to have many of the big works going at once. CAG has eleven: some going all the time and others only at set times of day, so it pays to familiarise yourself with the timetable or expect a lot of waiting around in the dark for something to happen. Quite a clever way to ensure high door numbers, I reckon. It can even be a teaching moment for thinking about the laws of motion.

I find a stronger attraction to some of the other mechanisms. There is a particular kind of meditative elegance to Universe that I associate with the quiet satori of zen gardens. The name was a late addition, a spontaneous renaming in response to overhearing a child ask if it represented the universe—a profound insight really, the infinite circle with its cycles of motion, and the clapper like a suspended planet. It slowly builds up momentum and then wobbles away, ringing its gong, oblivious to its audience. It’s a classic that never fails to live up to the expectations of its reputation.

The show includes one of the largest of the modestly-scaled iterations of Large Blade, of which Lye once wrote (as recorded in Roger Horrocks’ Zizz! The Art and Life of Len Lye, in his own words, Awa Press, 2015), “I see the sculpture Blade as three evocative sensory moments of past experience which have sunk down into my thighs. That’s how Blade shines and quivers when it is doing its stuff—flashing light, shimmering fish and taut quivering horse.” Storm King is a sort of upscaling of the thunder sheet theatres have used to simulate storms since the dramatist John Dennis invented it for his play Appius and Virginia at London’s Old Drury in 1709. That whole part of the gallery is a noisy affair.

My favourite of the kinetic works, however, is Witch Dance, with its unexpected transformation and flirtatious shimmy. It really does seem to have a ritualistic feeling to it, though perhaps that was partly the lingering effect of having seen Occulture at City Gallery in Wellington a week or so earlier. It seems an odd sort of paraphilia to declare some lengths of rod and shiny knobs “sexy” but there is an undeniable animistic charge, partly attributable to his eccentric understanding of Freud and Lévi-Strauss. To quote H. G. Wells’ now dated and somewhat racist 1894 short story, “Lord of the Dynamos”: “Scientific people tell us that savages give souls to rocks and trees—and a machine is a thousand times more alive than a rock or a tree.” Lye’s constructions have a definite presence and personality.

The thing that stops me short by wonder is that although many of these artworks couldn’t be realised until engineering advances after his death, like a latter-day Da Vinci he had them fully imagined and sketched out. Lye’s enthusiasm is still contagious from beyond the grave. I suspect it will be one of the most popular art exhibitions of the year. Certainly it’s one of the year’s most important.

Paraphillia, good word, most certainly, Blade is a sophisticated mechanised orgasm, especially when compared to Jean Tinguleys' pointlessly rutting automata, but I am not happy with the necrophillia, the post mortem pieces which are proportionately suspicious, Lye being all about physical harmony,and some newly engineered works feel clumsy and they break down all of the time.