Beyond the Brown Cube 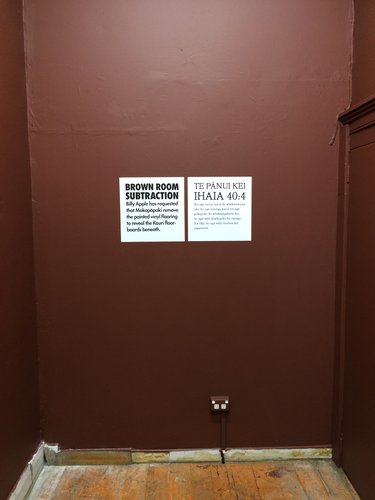 So what happens when Apple puts a work into a brown, not a white, room—a space specially devised to suit post-colonial political content? He exposes the kauri planks of the floor by removing a vinyl covering, and that new base takes on an indigenous symbolism. Mokopōpaki in turn replies—in a printed statement that is presented alongside Apple's own proposal—saying in Te Reo that here is a verse from the Old Testament Book of Isaiah (40:4) that ought to be thought about.

In the seventies and eighties, when I was much younger and living in Christchurch, I saw almost every artwork Billy Apple made in that city when he passed through on his national tours (he lived in New York then), and sometimes (with various friends like Paul Johns, Shaun Rowse and Michael Thomas) I was lucky enough to help him execute his plans. Billy was always convivial (as he is now) and keen to talk through his ideas-and various options—with other much younger artists. They learnt a great deal helping him put his shows together.

Two ‘makeover’ exhibitions of his that I assisted in then, that I remember well, were in the Brooke-Gifford and Robinson/Brooker Galleries. One involved removing inconsistent skirting boards, an unsightly door panel and a square of tatty raffia matting, and then sanding the wooden floor underneath and restaining it (B-G); the other involved removing and rolling up a long length of thick grey carpet, to reveal the underlying concrete floor (BR).

I mention all this because of his current exhibition at Mokopōpaki, a comparatively new dealer gallery under and adjacent to the stairs leading up to the old K’ Rd sites of Teststrip and Gambia Castle. Mokopōpaki is run by Jacob Terre; the gallery’s name comes from his Māori grandfather. The venue sees itself as an inclusive but critically collaborative place—Terre was a member of Terror Internationale—with the formal space known as ‘The Brown Room’ aiming to repudiate the culturally dominant Pākehā ethos via a confident and smart Māori perspective.

As you might expect, this work is very different from the various Apple ‘subtractions’ of thirty-eight years earlier. In the late seventies when Apple was doing his The Given as an Art Political Statement series of gallery alternations, after the alterations were completed, he saw it as an opportunity for dialogue about the quality of the exhibiting space, and who controlled the material variables of that quality. The work architecturally inserted into the white cube was usually a critique of some kind and he expected a response, hoping the proprietors would fix the ‘problem.’ He was offended if the elements he put in place or painted bright red, were just ignored or repainted white.

So what happens when Apple puts a Pākehā work into a brown, not a white, room—a space specially devised to suit post-colonial political content, engineered to confront all those who enter the space. He exposes the kauri planks of the floor by removing a vinyl covering, and that new base takes on an indigenous symbolism. Mokopōpaki in turn replies—in a printed statement that is presented alongside Apple’s own proposal—saying in Te Reo that here is a verse from the Old Testament Book of Isaiah (40:4) that ought to be thought about. Why is that?

Amongst Bibles, there are many English translations from the Latin Vulgate now available, but the third attempt to translate—the King James Version (1611)—is the one that here is retranslated into Māori. While it talks about the lifting up of valleys and the levelling of mountains that is common to other variations, it also says that ‘the crooked shall be made straight’—something found in this translation only. Amongst the warning images describing the violence of God’s power, seen in a dramatically altered landscape, those words imply not only a path that leads away from the Israelites’ (read: Māori) oppressors towards God, but also a moral promise emphasising justice and a new type of ethos.

Yet there is an ambiguity built into this installation: two white square islands (texts from Apple and Mokopōpaki) surrounded by a sea of brown; pale alien elements in a dark chocolate field. The statements empathise with the space, while also never feeling totally comfortable. The two resonate together uneasily, an architectural sans serif Futura font juxtaposed with the seriffed Phinny Jenson that has a rippling waterlike energy.

This enables nice contrasts to present themselves, internally and externally. European art and European religion on a Māori wall.